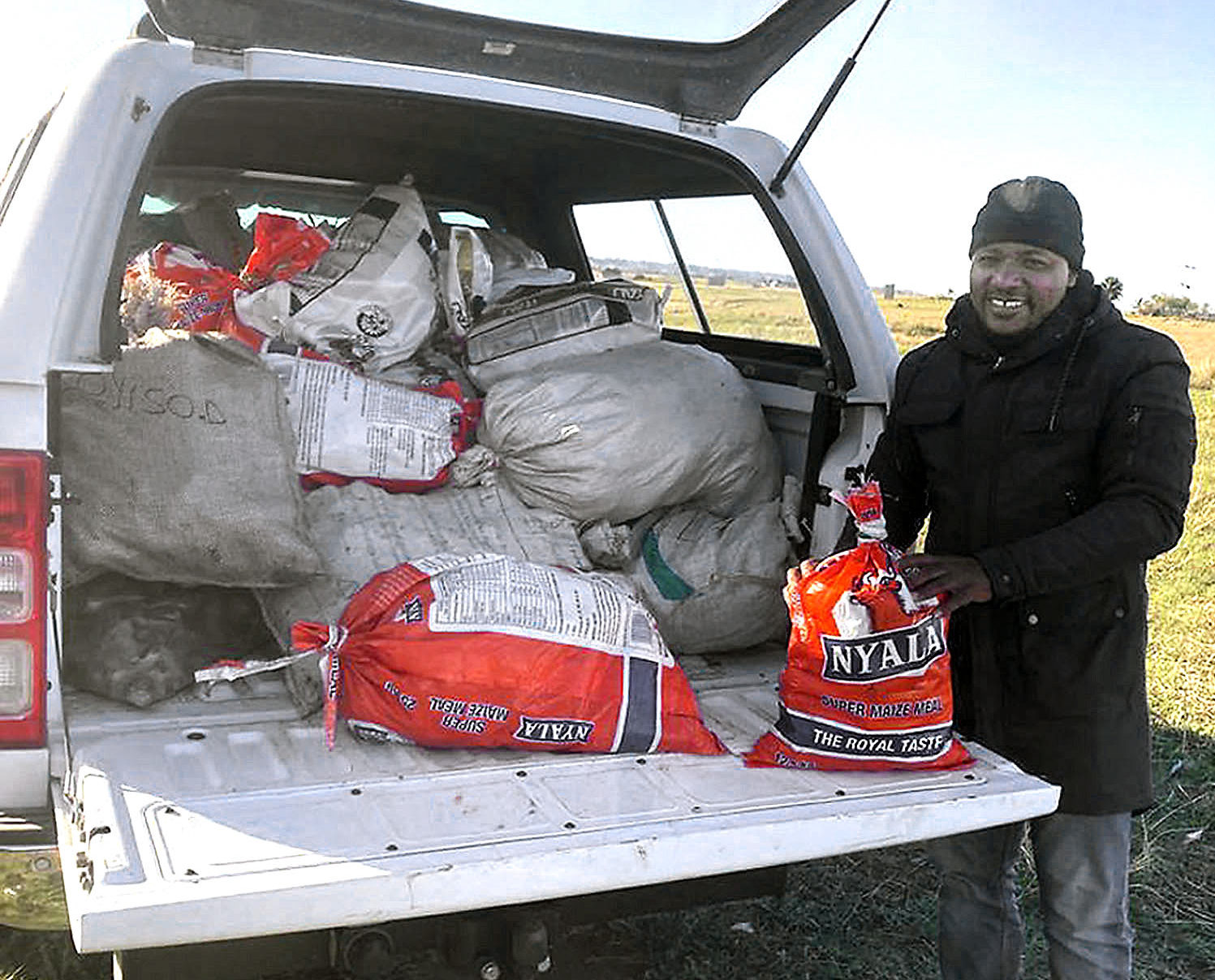 Through farming, many Amadiba coastal residents are not just surviving, but flourishing – with no state support or infrastructure. While the rest of SA rebuilds from the unrest, Amadiba farmers are providing fresh produce for vulnerable communities in KZN.

“Our villages in Xolobeni are aware of the support that AbM gave us ever since the murder of our late chair ‘Bazooka’ [Sikhosiphi Rhadebe] in March 2016. The donation is a payback for that support,” said Nonhle Mbuthuma, spokesperson of the Amadiba Crisis Committee.

Mzamo Dlamini, an activist with Amadiba, said, “The situation of not having food is one that Amadiba relates to as a result of climate instability. We do believe food donations may not necessarily solve the problem but will make a difference in the short term while they are finding ways to make themselves sustainable in the long term.”

The donation has reached 280 homeless people. Members of the Briardene community expressed their gratitude for the fresh produce

Zandile Nsibande said, “Thanks for your support, comrades, you showed us that an injury to one is an injury to all.”

“Given that everything that belonged to us was consumed by fire, and without any fridges or electricity, the perishable food donated to us by other branches goes bad real quick, the fresh produce from Amadiba has made a difference in our lives,” said another community member.

Another said that as most of the community members are homeless and unemployed, “Receiving the food donations has been a blessing to us, the people of Briardene. We live as a community and cook together for sustainability in these trying times to make sure no one goes hungry. The remaining food from Amadiba will last us until the weekend. Siyabonga!”

Sustaining the Wild Coast (SWC) has been raising donations from the public to buy produce from Amadiba farmers for distribution in the South Coast of KZN through the “Food from Amadiba for KwaZulu-Natal” campaign.

Margie Pretorius, chairperson of SWC, a non-profit company that supports sustainable development on the Wild Coast, said: “The ability of the Amadiba community to supply to communities hit hard by Covid-19 and looting should be yet another urgent call to government to desist from promoting mining in Xolobeni.

“It should also encourage the South African National Roads Agency (Sanral) to heed calls from the Amadiba coastal community to reroute the northernmost section of the N2 Wild Coast toll road further inland, away from the productive fields of the coastal villages, where farmers are determined to resist land dispossession.”

Pretorius said that since 16 July SWC has raised R40,000 which enabled the purchase of approximately six tonnes of sweet potatoes donated to the Food For Life South Africa (FFLSA) Port Shepstone branch. Food for Life has since repackaged the sweet potatoes into 700 smaller bags that are being distributed to needy families.

Pretorius said the donation to FFLSA helped to build on successful partnerships, and the organisation had worked with Amadiba in the severe lockdown of 2020 and has a solid history of providing meals to vulnerable communities on the KZN South Coast.

SWC invites people from across South Africa to donate to the cause to help feed vulnerable communities in KZN. This can be done either through the Given Gain platform or via EFT to the SWC bank account: