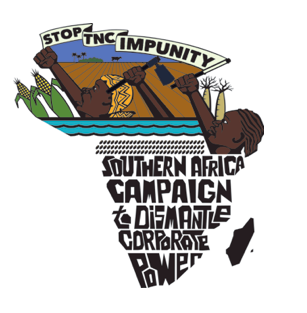 The time has come once more for the people to be heard!

The Southern African Campaign to Dismantle Corporate Power is hosting the 3rd session of the People’s Permanent Tribunal to be held in Johannesburg in the Newtown Precinct from the 9th to the 11th November 2018. The Tribunal will be followed by the Thematic Social Forum on Mining and Extractivism, which will take place in the same Precinct from 12th to the 15th November.

The Southern Africa Campaign to Dismantle Corporate Power is the regional leg of a Global Campaign to Reclaim Peoples Sovereignty, Dismantle Corporate Power and Stop Impunity. It aims to strengthen the joint struggles fought by communities against transnational corporations (TNCs) and brings partner organisations, affected communities and movements together to confront and break down the corporate systems which destroy their livelihoods, homes and health, and violate their basic rights, as well as the State policies which enable this.

The campaign’s first intervention to dismantle corporate power is through hosting the first Peoples Permanent Tribunals on Transnational Corporations (PPT) in the Southern Africa region. The Permanent Peoples’ Tribunal is a public opinion tribunal that is independent from state authorities. Its work is based on the principles of the Universal Declaration of the Rights of Peoples proclaimed in Algiers in 1976. The Tribunal applies international human rights law to the cases presented before it. The Tribunal serves as a platform for communities and movements to present their grievances and create awareness of their struggles to a larger Southern African and global audience.

The 1st session of the PPT was held in Manzini, Swaziland in August 2016 and the 2nd session was held in Johannesburg, South Africa in August 2017. From each session a Juror Statement is produced, the Juror Statement is a consolidation of the jurors deliberations. The first statement highlighted issues related to women and extractivism and the second statement highlights issues around development and the environment.

There are several communities affected by mining that are uniting in action against extractivism and arising from the testimonies made during the sittings of the tribunal it became clear that the campaign for the Right to Say No based on Free, Prior, continuous and Informed Consent (FPIC) has a potential to unite a wider range of communities and popular organisations. We foresee that following the Tribunal the Campaign will focus on driving the Right to Say No campaign in Southern Africa. We hope that the outcomes of the Thematic Social Forum on Mining and Extractivism will lead to a global campaign on the Right to Say No that will partner the Southern Africa Campaign to Dismantle Corporate Power

Such a campaign has echoes with civil society efforts internationally to regulate business enterprises, specifically TNCs through having the United Nations adopt a binding treaty on business and human rights. The 3rd Session of the PPT will feed the outcomes of the Tribunal into the Thematic Social Forum.

For more information about the tribunal: