The real meaning of the 25 April general strike: reply to Ronald Wesso

The real meaning of the 25 April general strike: reply to Ronald Wesso 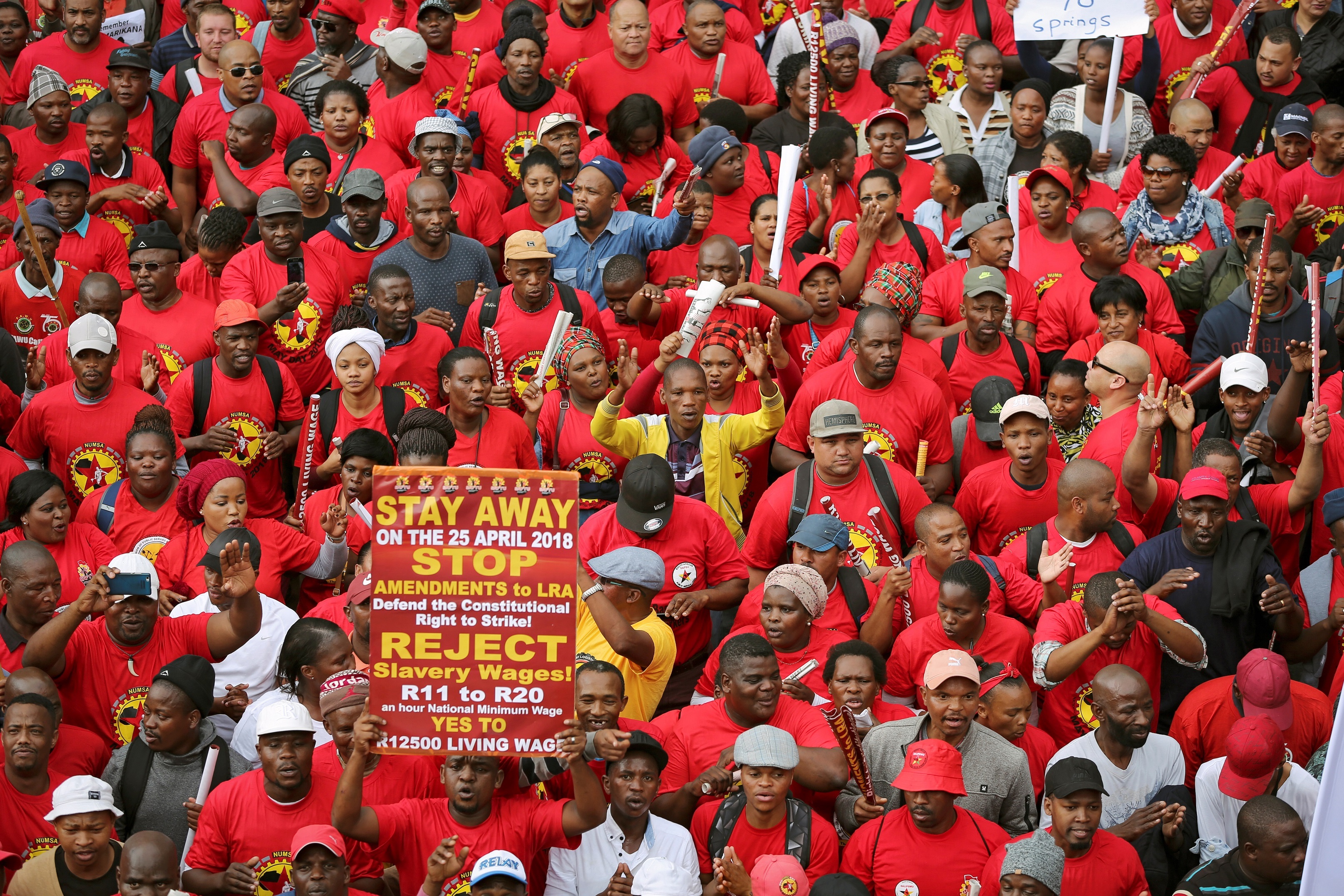 The 25 April general strike represented a massive rejection of the now passed labour bills and proposed minimum wages. The overwhelming turn-out, however, represented more than this. The march was also a crushing confirmation of Saftu as the new giant in the pantheon of working class politics. There was much consensus on this point across the spectrum of public commentators.

Except Ronald Wesso in his article in the last edition of Amandla! magazine. In an astonishingly pessimistic synopsis of Saftu’s future, he relies on a gross underestimation of the turnout, mischaracterisation of the demonstration, and a false method of anaylsis.

Miscalculations of figures and false prognosis

Saftu estimations of the demonstrations are 100,000 across the country, with Johannesburg accounting for over 30,000 of that.

Giwusa branches in Tshwane and Germiston printed about 1,500 t-shirts for the Giwusa contingent at the march. In a march of 10,000 to 12,000 we would have been highly visible. On the contrary, we were lost in the vast sea of red and barely visible.

While none of these estimations, including mine, are based on any scientific calculations, a cursory glance at pictures of various demonstrations shows that Wesso’s calculations are highly inaccurate.

The Deputy General Secretary of Numsa, Karl Cloete, is quoted by Eye Witness News (25 April) as also saying “we expected the national bus strike to delay transport for those attending but it has had a minimal impact”. Comrade Cloete was expressing our single biggest concern as the federation and relief at the spectacular success in spite of the logistical odds.

Such was the seriousness of the transport issue that the Steering Committee of #ScrapLabourBills had on this basis decided that 25 April would be a national stay away, without public demonstrations. It was purely by chance, that Saftu NEC “endorsed” the call for mass demonstrations.

This shows that the transport was a major issue and that it determined the decision on the form of protest. Anyone with experience of organising mass demonstrations in this country would know that the spatial legacy of apartheid geopolitical planning elevates the importance of bus transport.

Wesso’s assertions, including his insinuation based on anecdotal comments, that the lack of transport benefited the strike are therefore neither logical nor persuasive.

In defence of trade union resistance to neoliberalism and precarious work

From his wrong assessment of the general strike, Wesso proceeds to his final diagnosis of Saftu, which is that its condition is terminal. Without wasting time, he immediately proceeded to write Saftu’s obituary.

In his obituary, Wesso writes off not only Saftu but the whole trade union movement. He cites particularly the poor response of the trade union movement to the relentless pressure of capital to restructure in the past three decades: “the response of the trade unions to neoliberal restructuring of the labour market was a mix of resistance and cooperation. But there is no doubt that cooperation was the dominant element in this mix.” In the face of overwhelming evidence of workers’ resistance, he is forced to concede that “Cosatu in particular had strikes against privatisation and a campaign against labour broking” but to trivialise this heroic resistance he immediately alludes to the role of Cosatu in keeping in power “the ANC that was responsible for the neoliberal assault on the working class”.

All these facts are correct. However, Wesso’s flawed method of analysis brands the millions of workers who make our revolutionary trade union movement with the betrayals of its leadership.

Neoliberal restructuring was not imposed without resistance from the trade union movement. It is true that, by the end of apartheid, most trade union bureaucrats had capitulated ideologically to capitalism. This was not only due to the collapse of the Soviet Union and the propaganda of triumphant imperialism but also, more shamefully, due to many benefiting materially from neoliberal restructuring – for example in the form of personal and union investments in labour brokers. But the bureaucrats were thrust into the political leadership of bitter class struggles against labour broking, which often meant a stubborn Stalingrad shop-floor resistance to every instance and phase of privatisation, outsourcing and casualisation of work.

Class hatred and opposition came not only from the immediate casualties of the neoliberal restructuring – the precarious workers and the unemployed. It cut across the workers’ movement.

It is for this reason that Cosatu, despite its degeneration under the bureaucrats, forced formal concessions from ANC for the labour law amendment bills banning labour broking.

When Minister of Labour Mildred Oliphant defiantly stated that “labour-broking was here to stay”, Cosatu called a general strike in March 2012. It was the revolt of the mostly permanent, male, better paid and more job-secure than average rank and file of the Cosatu affiliate, NUM, against cheap black migrant labour system, and the class collaboration of their trade union leadership, that finally forced the passage of labour bills and legally put the final nail in the coffin of labour broking.

That the trade union movement achieved this feat with a bureaucracy that was largely not committed and often in open defiance of its leadership, only makes it all the more remarkable and completely vindicates it. 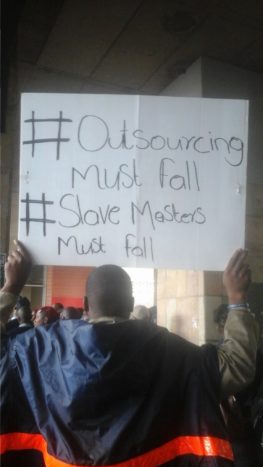 Nobody, including Saftu leadership, will assert that we are the shining example of revolutionary trade unionism. Saftu, however, has become a beacon of hope for many marginalised sections of the working class including precarious workers, the informal economy sector, women and migrant workers and the unemployed amongst others.

Saftu is making modest but serious inroads into winning over these layers of the working class. Through #OutsourcingMustFall we have managed to win many victories in institutions of higher learning, municipalities in Gauteng and across the country including rural areas of Limpopo. Many of these cleaning, security and other outsourced workers have joined Giwusa, Apsa and other affiliates.

Nupsaw has been organising community healthcare workers, along with Giwusa and Numsa, as well as Working on Fire and precarious workers in the public sector. To be sure, these are only modest beginnings, but they are great outlines of the future programmatic orientation and mass trade union drives to reach out to these and other layers of marginalised layers.

It is not just the new unions but the very established affiliates Wesso is condemning that are fighting. Recently, NUMSA won a Constitutional Court order which legally put a final nail in the coffin of labour broking. Whether it will translate into complete disappearance of labour broking depends on the entire labour movement. There is however no doubt they rendered historic service to the working class and precarious workers in fighting this case all the way to the apex of our court system.

Orientation to marginalised layers of the working class

Both the issues on the agenda and the list of organisations invited to the working class summit showed an orientation towards marginalised layers of the working class and how seriously we view working class unity. Organisations we are engaging include waste pickers associations, street traders and mine-affected communities who are battling extractive capital. We are calling for a three day general strike and mass occupations in demand of 5 million jobs, 5 million student placements, 5 million houses and nationalisation of the key sectors of the economy under the democratic control and management of the working class, amongst other demands.

To set-out of these facts is not to suggest that we are content with our work. On the contrary we are far from satisfied with ourselves, our affiliates and the work we do, including reaching our targets and millions of unorganised, mainly marginalised workers.

However, Saftu is the only organisation that has sought out and remained open to equal participation, including at NEC level, of every independent, democratic and worker-controlled formation, including Simunye Workers Forum. Wesso and CWAO organise just as we do with the #OutsourcingMustFall Campaign. Unfortunately, CWAO has decided to keep the Forum out, though many of the workers in it rightfully belong to our affiliates and instinctually sense Saftu as their fighting alternative.

Perspectives for Saftu and the revolutionary trade union movement

Whether Saftu realises its full historical potential depends on many objective variables, including the economic situation and rhythm of class struggle in the period lying ahead.

No less important, however, is the outcome of the struggle to forge genuinely independent, fighting and revolutionary socialist trade union affiliates that can face up to challenges of the cheap migrant system with its poverty wages and colonial slavery, job losses, destruction of vast sections of industry through mine and factory closures, savage neoliberal austerity and counter-revolutionary attacks on labour and many democratic rights.

Mametlwe Sebei is President of General Industries Workers Union of SA (GIWUSA) and National Co-ordinator of #OutsourcingMustFall, both affiliates of SAFTU.