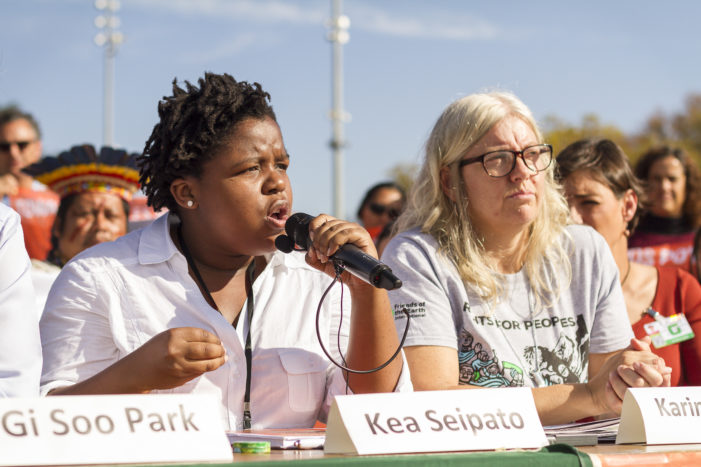 The Ground-breaking process aiming to bring transnational corporations to account for their human rights violations is increasingly catching the attention of UN member states delegates, civil society and peoples’ representatives worldwide. Members of parliaments from more than 30 countries including the European Parliament and over 700 civil society organizations have indicated official support for the process.

Pablo Fajardo, representative of the Union of People Affected by Chevron, said, “The people affected by the operations of transnational corporations have been trying for decades to access justice in multiple courts. The current system does not, however, allow us access to justice and impunity persists. The UN treaty must be the instrument that guarantees in practice access to justice for the peoples whose human rights are violated – ensuring that violations are not repeated and that reparation is achieved.”

Gi Soo Park from La Via Campesina, alluded to the UN Human Rights Council’s recent resolution to adopt the peasant rights declaration, “The human rights declaration of peasants is about how we can protect the food sovereignty of our people and raise awareness about the destruction of our communities by transnational corporations. It is not perfect, but it is a way to promote the idea that we have rights as peasants. Protecting our rights to live in harmony with nature is what we are seeking. We hope this declaration helps inform the treaty on transnational corporations.”

Kea Seipato, Coordinator of the Southern African section of the Global Campaign to Reclaim Peoples Sovereignty, Dismantle Corporate Power and Stop Impunity, stressed that, “The people of Southern Africa are calling for a self-determined development and are demanding a Treaty that will ensure that. They are calling for the ‘Right to Say No’ to the plunder of transnational corporations.”

Karin Nansen, chair of Friends of the Earth International said: “Organizations and social movements around the world are demanding justice and an end to the impunity of transnational corporations that are responsible for the systematic violation of peoples’ rights. We are calling for the adoption of a legally binding Treaty that establishes direct legal responsibility for transnational corporations and their managers throughout the production chain. We can only guarantee access to justice for those affected with an effective implementation mechanism. The treaty must prioritize human rights over free trade agreements and investments.”

Member of the European Parliament Lola Sánchez Caldentey stated, “It is the turn of the people, to make sure that our States -those who have a voice and vote in the United Nations- speak with a voice that does not embarrass us, that they defend our demand for justice and human rights.”

More than 100 delegates from over 40 countries representing social movements, trade unions, communities affected by transnational corporations’ human rights violations and civil society organisations are in Geneva this week to present their proposals in the fourth session of the open-ended intergovernmental working group on Transnational Corporations and other Business Enterprises with respect to human rights.

To arrange interviews or further information