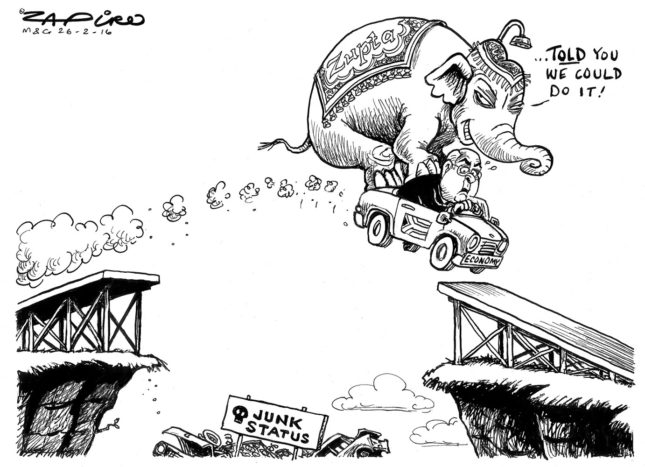 Let me begin with a confession: I am not an economist.

However, I have had the benefit of reading some world-renowned economists who are critical of the economics that make rating agencies more powerful than governments.

Ha-Joon Chang, of Cambridge University, is one such economist. Let me both recommend his book – Economics: The User’s Guide – and quote from it: “95 per cent of economics is common sense – made to look difficult, with the use of jargon and mathematics. … [E]conomics has been uniquely successful in making the general public reluctant to engage with its territory. … [E]specially in the last few decades, people have been led to believe that, like physics or chemistry, economics is a ‘science’, in which there is only one correct answer to everything; thus non-experts should simply accept the ‘professional consensus’ and stop thinking about it.” (pp3-4)

The British Queen was amongst those who unquestionably accepted the authority of the professional consensus. Shortly after the beginning of the greatest global economic crisis in 70 years that began in the US in 2008 and is now sometimes called the Great Recession, she happened to have been the royal guest at an event of the prestigious London School of Economics. She asked the esteemed professor representing the LSE why it was that economists – and, here, I would include the World Bank, the International Monetary Fund (IMF), and very much the Rating Agencies – had so singularly failed to predict the crisis. The learned professor couldn’t give an answer .

Which is not surprising, for, many years earlier, another of the economists from whom I’ve learnt so much, John Galbraith, had noted: The only function of economic forecasting is to make astrology look respectable. With this brief introduction, let me address what is everywhere being presented as our enormous good fortune in having the splendid Pravin Gordhan back as our Finance Minister. He saved us from junk status, from what we were most assuredly told by all the economists of the mass media was nothing short of Armageddon.

Steven Friedman is not an economist. This might explain why he could ask the fairly obvious question: If you can get people to listen to you only by threatening doom, what do you do when the doom happens —– and those you have been threatening find it isn’t the end of the world after all? [Business Day 4/5/16]

I wager that very few South Africans have ever heard of rating agencies and even fewer have any idea of what they are. As for ‘junk status’, well, it stands as an egregious example of what Ha-Joon Chang calls jargon; jargon that in this case alarms – at the mere mention of the word. With all the coverage on our unexpectedly having been saved from junk status, let me ask: Who are the ‘we’ who should be celebrating ‘our’ good fortune? To answer this question, I turn to my mate Ha-Joon Chang, for the last time. He tells us: Economics is a political argument. It is not – and can never be – a science; there are no objective truths in economics that can be established independently of political and frequently moral, judgments. Therefore, when faced with an economic argument, you must always ask the age-old question ‘Cui bono?’ (Who benefits?), first made famous by the Roman … Marcus Tullius Cicero [p.451].

Asking Cicero’s simple question – Who benefits? – and addressing that question to rating agencies, is the same as asking: Who benefits from our economic system? This, as I shall be attempting to demonstrate, is because rating agencies enforce the political economy that makes them so profitable. In arguing this ‘alternative’ view of rating agencies, I shall not be using alternative sources of information. Everything I shall be saying is to be found in the mainstream media. My contribution – such as it is – is in the different interpretation I give to the information that is readily to be found everywhere. Most of the information, indeed, comes from the voice of South African business, Business Day.

I’ll leave it to you to decide on the persuasiveness of the alternate interpretation I give to the information available to all of us. However, let me say at once, I’m not a conspiracy theorist. I do not think editors have secret dawn meetings to decide what interpretation to give to the previous day’s events. In my understanding, most journalists most of the time do no more than honestly reflect the world, according to their own understanding. This applies equally to economists. We all do this.

So, yes, we are all imprisoned in our own understandings of the world and our place in it. The good news, however, is that the prison has no doors: We are free to leave our ideologies but, for this change to happen, we first need to be aware of them. Knowing alternatives helps. And, now, back to rating agencies. Who and what are they? Look them up on the internet and you’ll more than likely to be told they provide free information to everyone.

This, however, is not the same as saying their service is free. There is no free lunch when dealing with rating agencies. Their clients, contrary to popular belief, are not investors. Their clients are rather the would-be debtors seeking to reassure investors of their credit worthiness. For instance, Governments, claiming to have insufficient income to finance their budgets, pay the agencies to assess their risk of defaulting. This arrangement gives the agencies a profit incentive to be uncritical of their clients; too critical an assessment runs the risk of losing business. You may understandably be rejecting this line of analysis, with its conflict of interest at the very heart of what rating agencies do. After all, rating agencies have their reputations to protect, for, it might seem, their business is entirely dependent on their unquestioned independence and integrity.

A rather telling example of this NOT being the case is central to the beginnings of the world-wide Great Recession that is now in its 8th year. At huge cost to the world and millions upon millions of people, including South Africans, sub-prime housing – that is mortgages given to to homebuyers with bad credit and undocumented income – belatedly came to be seen as everyone’s prime example of ‘junk’. Yet the rating agencies gave this real ‘junk’ their highest possible rating. Such was the unprecedented nature of the bursting of the sub-prime housing bubble that the Congressional Commission into the disaster found, in its report, of 2011: We conclude the failures of credit-rating agencies were essential cogs in the wheel of financial destruction.

The three credit-rating agencies were key enablers of the financial meltdown. The mortgage-related securities at the heart of the crisis could not have been marketed and sold without their seal of approval. All this ought to have put paid to the rating agencies, for their credibility ought to have imploded to a firm zero. Yet, these same agencies are still in South Africa, still dictating to a democratically elected government that, moreover, willingly humbles itself before them. And economists continue to hang onto their every word. Their credibility effectively remains untarnished. How is this possible? It ought to be astonishing! It ought to be incompressible – until one remembers Ovid and his simple two word question: Who benefits? Rating Agencies have not only survived but are even stronger than before for one simple reason: speculative capital has not only survived its reputational crisis of 2008-9 but its global dominance has become even more secure. Rating Agencies exist only because the world is afloat with surplus capital, ready to go anywhere and for any purpose in expectation of profit maximisation.

Morality is seldom, if ever, part of speculative capital’s calculus. Capital’s only proviso is the security of both the investments and the free movement of the profits, to wherever the investor chooses. In this arrangement, Governments facilitate the profit maximisation, while the unelected rating agencies evaluate the security risks. Rating agencies are the highly efficient and effective, free and unarmed gendarmerie of speculative capital. Remember that economics is a political argument. Restricting my answer to why the world is drowning in surplus capital to a few, short sentences, I would say: (a) To maximise profit, each enterprise, regardless of size, seeks to minimise wages. What is therefore good for each capitalist becomes a problem only for the collective capitalist. This is because the self-interest of each capitalist to keep wages low results in workers not having sufficient money to buy back all that has been produced. This surplus is the first part of my answer. (b) The second part is that, overtime, the surplus grows so large that it becomes more profitable to by-pass what economists still call ‘the real economy’ and to invest instead in financial speculations of bewildering number and complexity.

US sub-prime housing being the prime example. Contrary to popular belief that want of money is why recognised socio-economic needs go unmet, the truth is very different. Surplus money exists in numbers that defy comprehension. These numbers are public. Look them up on the internet or look for them in our newspapers.

The point about surplus capital is that it exists to make still more surplus capital for the speculative capitalists. It is not available for the public good. What ought to be astonishing is that the rating agencies do nothing to hide their purpose of protecting the interests of speculative capital. They have openly and repeatedly told our government what is expected. Apart from the unspoken premise of foreign capital being inherently good, at its core, the expectation couldn’t be simpler: more of the same, while avoiding some things.

What neither they nor the standard commentators have said, however, is that it is precisely this core – which has been standardised throughout the world since first being introduced by Margaret Thatcher in the early 1980s – that has left us where we are today: a society ravaged by 3 huge deficits: poverty, inequality and unemployment . Putting this inconvenient truth to one side, the Agencies expect a vastly increased Gross Domestic Product but are silent about how, using their own prescriptions, this is to be achieved. And, of course, they simply ignore the rapidly growing critique of GDP as a measure of a nation’s well-being.

This brings me to the matter of state capture. Politicians, along with the media and economists, have all welcomed the rating agencies’ stay-of-execution. Our politicians have pledged good behaviour and the media have applauded them for their realism. I ask you to imagine a different scenario. What would have been the response if similar demands, and threats of retribution, had been made by – the Guptas? Let me end with another question: I’ve argued that rating agencies have remained so powerful because they represent the interests of the speculative finance capital that has survived the collapse of the world’s banking system in 2008-9. The hitherto unasked question with which I leave you, is: How has the system based on profit maximisation managed to survive, what, for most people worldwide have been 8 disastrous years of growing inequality and ever increasing unemployment?

A clue: Might it have something to do with the way ‘we’ – the vast majority of the world’s population – unquestionably accept the world as presented by them, the rating agencies?

By: Jeff Rudin – Research Associate at the Alternative Information and Development Centre (AIDC)

(This article on credit rating agencies, was first given as an address to the Catholic Parliamentary Liaison Office (CPLO) on the 22 June 2016.)