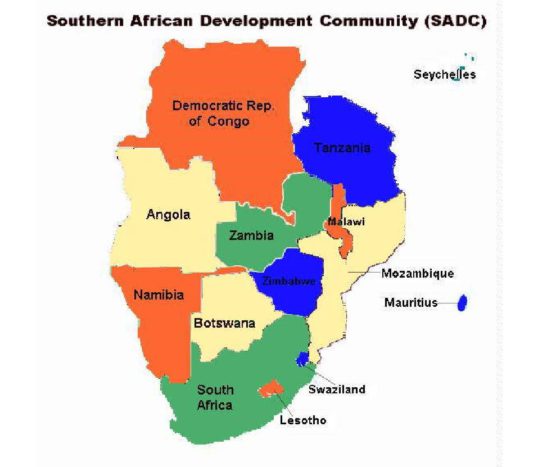 Regional co-operation and integration are critical towards resolving the multiple challenges affecting the peoples of Southern Africa. The region has been gripped for many decades by a crisis of underdevelopment made worse through the imposition of structural adjustment programmes and the capitulation of governments to neoliberal globalisation.

The advent of the financial crisis in 2008 as part of a wider economic and multi-dimensional global crisis is aggravating pre-existing divisions and inequalities within and between countries of the region. This is most recently highlighted by the student uprisings and the political instability in Malawi, heightened tensions between the ruling FRELIMO party and the RENAMO opposition in Mozambique, the continuing instability in the Democratic Republic of Congo and Zimbabwe.

South Africa, the most powerful country in the region, economically and politically faces enormous development and resource challenges, which have an impact on how it intervenes in the region and approaches regional integration. It is widely recognised as the most unequal country in the world and the economic crisis has had a severe impact on SA’s mass unemployment crisis where more than a million workers were retrenched between October 2008 and January 2010.

Deepening poverty and unemployment in SA creates extreme tensions with immigrants coming to South Africa to escape the social, economic and political crises that grip the region. In 2008 xenophobic violence broke out in many of the country’s townships and informal settlements, leading to a large number of deaths and displacements of people. These attacks continue at a low intensity level.

Since the end of Apartheid South African capital and the state have seen Southern Africa as a gateway to investment across the country. By the early 2000s, South African mining and industrial corporations, financial institutions and even some medium-sized enterprises have once again asserted their role as a dominant force in the SADC region. South African capital is by far the biggest investor in the region and through SADC and the smaller Southern African Customs Union has imposed a free trade agenda that subordinates the region to the interests and ultimate domination of SA and its corporations.

This has only marginally changed with the recent multiple interventions of resource-hungry China in the region. Through soft loans and preferential trade agreements from China many Southern African countries are seeking, at least at the rhetorical level, greater autonomy in authoring national development strategies and challenging the dominating roles of the European Union and to a lesser extent SA.

Nevertheless, the conflicting agendas in the region of the EU, the international financial institutions, China and the dominance of South Africa’s economy has meant that the lofty ideals of regional integration and co-operation that underpinned the formation of the Southern African Development Community (SADC) have been largely thwarted. In the process there has been a further deepening of the social, economic and environmental crises affecting the region.

The South African government has a deeply ambivalent attitude towards the region. On the one hand, when representing business interests, it sees the region as its sphere of domination. On the other hand, it is very sensitive to charges of the naked exploitation of South African business and its disregard of the developmental needs of the region or specific country. It is particularly susceptible to accusations of behaving with the arrogance associated with apartheid.

In this context the recent shift by a number of Southern African states to incorporate at the policy level national industrial development objectives holds out both opportunities and threats. This proposed higher level of economic development and diversification is directly associated with the demand for a certain degree of minerals beneficiation and associated job creation to be undertaken by foreign companies engaged in their mining sectors. What is being dubbed “minerals nationalism” by mainstream foreign analysts, also includes initiatives by various SADC governments to obtain improved royalty terms, and higher tax payments from the international mining companies in their countries. These relatively more assertive governmental stands in relation to rapacious, exploitative and polluting foreign mining corporations are welcomed by their own populations as commendable evidence of their greater national concerns, especially with regard to local job creation. This is adding domestic credibility to such governments (for example, the recently elected Sata government in Zambia).

For progressive organisations seeking to advance regional integration against the impact of corporate globalisation and the blow-backs from the global crisis it is important to ask whether there are proposals within this “minerals nationalism” for a revival of the nationalisation and full national control and benefits from minerals exploitation in these countries; and how, ‘this time round’, such nationalisation programs would also incorporate more responsible energy and environmental policies and practices. The more likely situation is that this more assertive policy stand is driven by the strengthened position of the private sector in many Southern African countries with competing interests and which seek to use their respective national states to advance their interests nationally (at the expense of the dominated classes) and regionally.

It also brings into focus the current nature and direction of SADC. Open regional integration, which subordinates the economies of the region to its former colonial powers, especially the EU stands in contradiction with intentions of facilitating greater national industrial diversification and sovereignty.  Trade agreements – with the officially designated ‘SADC EPA’ with the EU (even though it includes only 6 of SADC’s 15 members) being the most recent – further entrench competing and conflicting regional divisions as well as perpetuate the unequal power relations the transnational corporations of the ‘developed’ world and the region.

Intensified competition of national states and local business elites will further undermine the opportunities for forging a common agenda of co-operation and integration within the Southern African region.

Within this scenario we need to factor in the likely impact of the global crisis on the region. The financial crisis that broke out in 2008 is a symptom of a much wider crisis of the global system. Many countries within the region are now facing, in varying degrees, the additional problem of the global collapse of the price of their minerals. Not only does all this represent a crisis of the neoliberal model but a deeper crisis of the over-productivist, endless-growth, financial-speculative model which puts humanity and the planet at great risk. The risks and dangers of this period seem to be lost on the ruling elites in Southern Africa. Increasingly, their approach is driven by a sentiment “its now our time to eat” with the hope that the commodities boom is the menu from which to feast. A new nationalist sentiment is emerging around the exploitation of the region’s natural resources without much consideration to critical social, environmental, economic and political concerns.

The current period is contradictory: on the one hand the rise of “resource nationalism” associated with possibilities for driving greater national industrial development holds possibilities for questioning and ultimately challenging the hold of neoliberal globalisation and subordination to the so-called “Washington Consensus”; while on the other hand the driving forces of this assertion of national economic development, principally the private sector, the regional hegemon SA and the possible impact of the global economic crisis can once again lead to another decade of social and economic instability, division and polarisation within and between countries.

To overcome the legacy of colonialism, neo-colonialism, neoliberal globalisation and failed “development” requires a regional integration project that goes beyond the idea of the need to pool resources in regional arrangements which will allow member countries collectively to confront the daunting challenges of the global markets, and strengthen their bargaining power on the global stage. In other words it needs to go beyond a regional integration that is meant to make it possible for weaker countries to engage and benefit from the global economy.

The regional integration needed in the context of the deep and multi-dimensional global crisis which is in the process of reconfiguring the dominant accumulation path and geo-political power arrangements requires a regional integration that simultaneously resists, challenges and presents alternatives to global capitalism.  Absent corporate interests and the elites living off them, regional integration that allows for mutual development is a no-brainer: Water-rich countries live side-be-side with water scarce countries. The potential of large amounts of hydro-electricity that is surplus to national needs could contribute to the unmet electricity needs of much of the region. This applies, even more so, to renewable energy and its local manufacture. And desperately needed jobs would be another major benefit of a genuinely cooperative regional integration.

The regional elites of Southern Africa are an obstacle not an agency for this task. Ours is a kleptocratic and predatory crowd who have concentrated mainly on deploying public office for purposes of individual private accumulation.

An alternative paradigm of development that secures the possibilities for living well for all the region’s peoples and overcoming environmental degradation is in reality a call for a new liberation struggle, a fight against neo-colonialism and for social, economic and environmental justice. At the heart of this struggle are the popular initiatives in the region: trade union, social movements, environmental, women’s youth and other formations that are involved in defensive struggles for jobs and decent work, agrarian reform and food sovereignty, against patriarchy, for democratic  rights and against authoritarianism and corruption; and even the more transformative  struggles for solidarity and low carbon economies, the rights of nature and even anti-capitalist futures. All these exist across Southern African, some initial and embryonic some bold and inspiring. It is likely these initiatives will be enhanced and emboldened by global developments as resistance grows in the heartlands of global capitalism to austerity and the global crisis. The challenge will be to build on what are mostly national responses and process and to regionalise them in a context of building an alternative regionalism.