Million Climate Jobs Monthly Meetings have been taking place at AIDC´s premises since 2012. Approximately 25 participants attended the meeting on 23rd May 2017. This time our main agenda item was a presentation on the just transition by Tasneem Essop.

Just transition is a concept introduced by the trade unions. It sets a framework how to deal with the multiple crises, not only the climate change crisis, we are facing these days and sets a special focus on those who are especially vulnerable to the changes.

Climate change increases the strength and the frequency of extreme weather events such as droughts or floods. We can already feel the impact of climate change, but it is going to get worse, when the climate heats up further. The climate crisis endangers our food and water security. On top of that we are stuck in an economic crisis. More and more industrial jobs are shredded. This increases unemployment, poverty and inequality.

In order to overcome these crises,big fundamental changes are required. In order to curb the climate change, we have to stop the use of coal, gas and fossil fuels. We have to switch to a sustainable way of production, resource use and consumption. “We“ means everyone, whether rich or poor. This will hurt. Whole industrial sectors, e. g. mining or coal fired powerplants, will have to close down. There will be job losses.

But this is where the just transition comes into play. It is likely that these changes happen anyway. One example: When more and more countries decide to move away from coal power, there is less demand for South African coal and the mines have to close down for financial reasons. The changes will be very painful, if they hit us off guard. In order to manage the transition in a just way, there has to be a plan in place.

So far planning the transition to renewable energy was the business of politicians and big business only. In order to make the transition just and fair, everybody´s voice must be heard. Otherwise those who are most vulnerable to climate change will be ignored. At the moment, there is no plan for a fundamental change in place, but people have lots of ideas. In order to bring them together conversations and tough negotiations are needed. There is no blueprint how to organise the process, but a few things should be kept in mind:

The talk about the just transition is almost 20 years old – it is time to get beyond talking and start making proper plans to build future livelihoods. 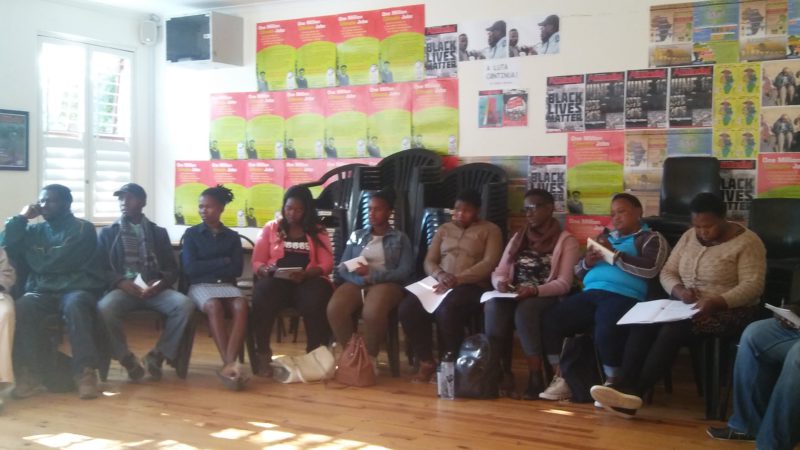 Fossil Free is a worldwide campaign. Last week a global week of mobilisation took place. In Cape Town, the UCT took the lead in alerting people on the advantages of divestment. Investing in fossil fuels is not only an ethical issue but also a financial risk nowadays. That´s why the need for low carbon investment products was especially stressed during the week of mobilisation. Whereas there are already portfolios of this kind existing in several countries of the global North, the South African stock market so far lacks fossil-free portfolios. A task team within the Fossil Free Group at UCT is going to be set up next week in order to take care of this issue.

The implementation of climate change policies and treaties such as the Paris Agreement is often threatened by Fossil fuel companies, because of their strong lobbies. Currently there is a climate change convention taking place in Bonn, Germany. There fossil fuel companies are only allowed to participate as observers, without any right to engage in the debate. This counts as a victory in the fight to curb their power.

On 12th of May it was announced, that Brian Molefe returned to ESKOM as an chief executive. This decision is highly questionable, given the damning evidence against him in the State Capture Report. His return will not contribute much to the solution of ESKOM´s governance problems.

As renewable energy IPPs narrow the space for a nuclear power plant, there are more and more obstacles put in the way for them. 37 IPPs are on hold because ESKOM Refuses to sign their contracts. So far, at least the awarding of IPP contracts has worked relatively well. Now there are plans to incorporate the IPP office into the overhauled Central Energy Fund. The CEF´s is not exactly an example of good governance – its main subsidiaries PetroSA and SFF are in major financial trouble.Moving the IPP office to the CEF is going to weaken its effectiveness.

As reported in the previous meeting, the unions got kind of caught between ESKOM and the renewable energy IPPs, because they fear job losses going hand in hand with the close down of coal fired power plants. Just recently, on 17th May, NUM stated that it is not against renewable energy in general, but against the IPPs in their current, privatized form.

The Australian Company MRC is mining sand at the West Coast. The local community has already been fighting against them exploiting workers, ignoring community participation processes and damaging the environment for years. Now the company has charged two supporting lawyers and an activist with defamation. The lawyers are supposed to pay damages of R 500000 each, with the activist being sued for R 750000. It is very likely that no court will support the defamation claims.  Indeed, the main purpose of the court action is not to win but to intimidate. This is fairly standard action by large companies across the world. 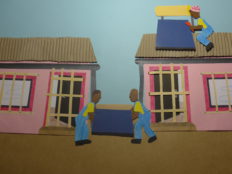 Lucia presented the final version of her film on solar water heaters. She is going to try to finish another episode before she returns to Germany in August.

Jeff Rudin on behalf of the Water Caucus: Follow-up on free basic water

A letter was sent to the City of Cape Town asking for reasons for the Free Basic Water policy review. So far it has not been answered. There is the option of asking the EFF to turn it into a parliamentary question, which has to be answered by the Department of Water and Sanitation.  EMG and the Water Caucus should consider this option.

Agreed that the main new item should be on the proclamation declaring the Western Cape to a drought disaster region and the implications this has for workers and the poor.  It was left to AIDC to find a speaker/s and to set the date according to the availability of the speaker/s.