Getting out of the mess [Amandla 55/56 Editorial]

Getting out of the mess 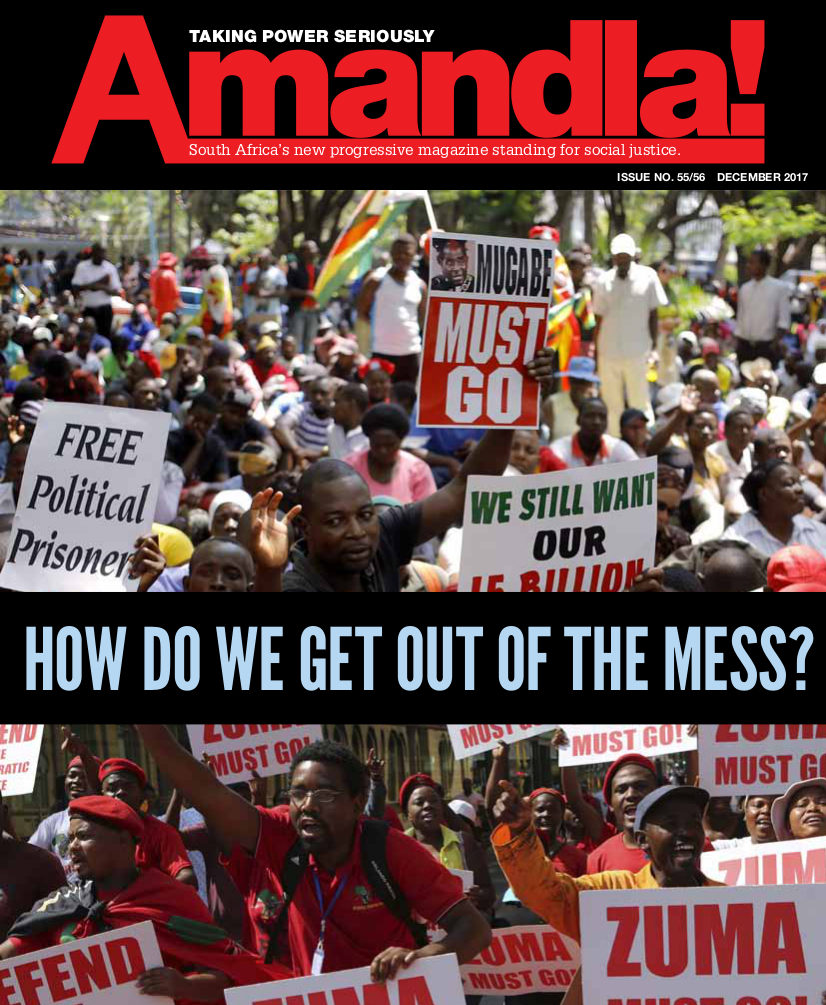 We have to acknowledge that we are sitting at a low point for popular movements and popular politics. Not just in South Africa. Look at Zimbabwe. The army intervenes to protect its interests against those of another Zanu-PF faction. There is a stalemate for days. But the only opposition comes from speeches of discredited leaders. Even Evan Mawarire, who led the last wave of protests, comments from his house, not from the streets. There is no force able to even contemplate challenging at a time when the elite is in a position of weakness – at war with itself and with both sides thoroughly discredited.

Similarly in South Africa. The ANC is splintering in front of our eyes and there is no real popular force that is capable of taking advantage of the mess.

That is what inspired us to ask the question “How do we get out of this mess”?

ANC not part of the solution

Firstly, we need to get some ancient obstacles out of the way. The ANC will have nothing to do with getting us out of this mess except as an obstruction. Riven with competing factions and material interests, the organisation can only take us deeper into the mess. This is so clear, to so many, that it becomes a puzzle why by now neither Cosatu nor SACP has been able to see it.

The dogma that blinds

Something must be getting in the way. Blocking their vision. We don’t have to go far to find it. Dogma – a preconceived, rigid view of the world – is a very effective obstacle to vision.  The dogma of the “National Democratic Revolution” requires a national democracy which is not a workers’ or socialist state. Who else can the SACP or Cosatu ally themselves with for national democracy except the ANC?

That is why both Cosatu and the SACP are in the process of repeating the grievous error of Polokwane. They are aligning themselves again with a candidate for the ANC leadership, because the only alternative is to go it alone as a communist party or a trade union federation. That represents not just a scary organisational prospect. It would require a fundamental change in analysis, theory and strategy.

And what does this dogmatic albatross give the SACP? It allies them with Ramaphosa the mining magnate, Ramaphosa the billionaire who got rich from mining capital, Ramaphosa who showed his fundamental allegiance at Marikana. when he claimed the strikers were “criminals” and urged “concomitant action” the day before the massacre.

Now this is beyond dogma – the realm of the ideological. This is naked material interest. A Ramaphosa ANC will be unable to allow a shift to a rational alternative energy policy. After all, they must sell their coal. 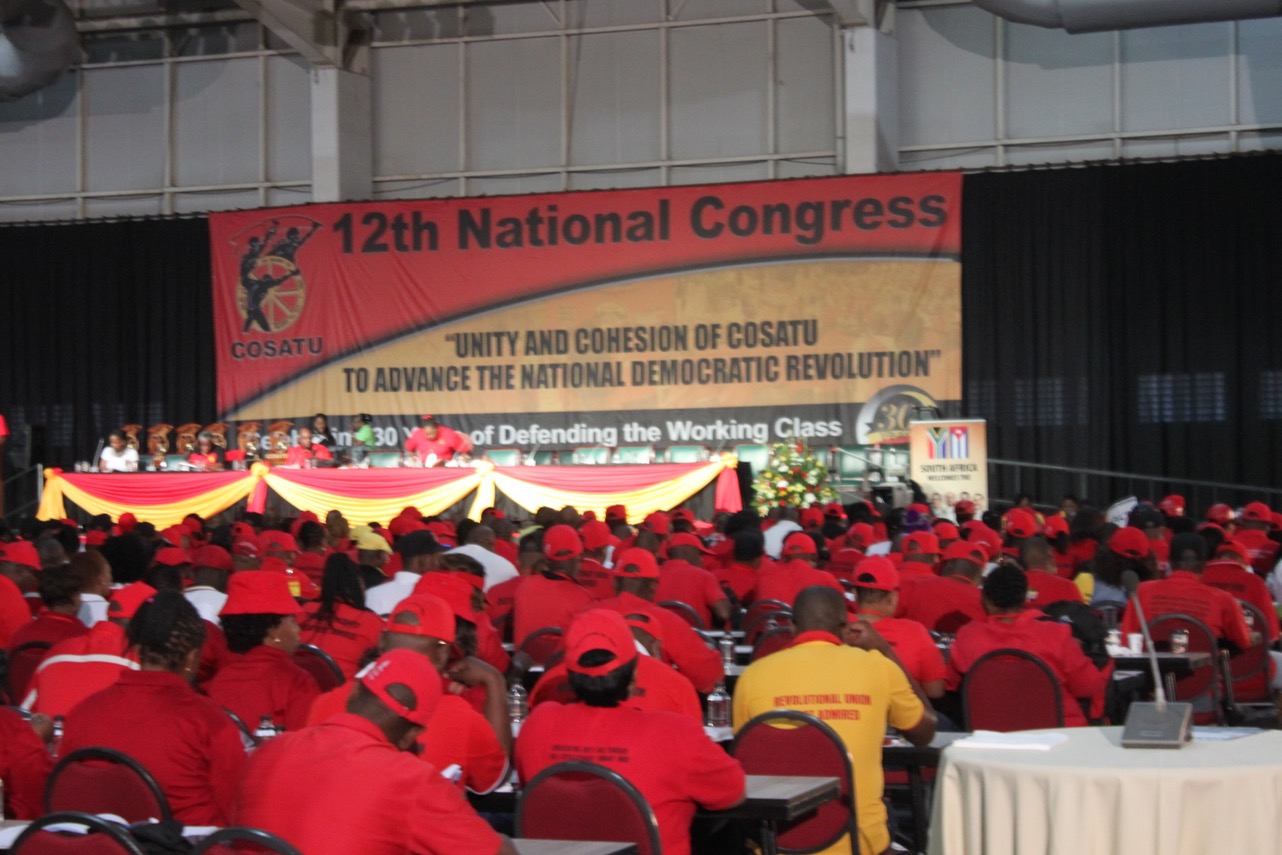 And a Ramaphosa ANC will have to continue a strategy based on a continuation of the neoliberal strategy of the Mandela, Mbeki and Zuma governments. A strategy which minimises the role of the state and maximises the opportunities for capital to profit from delivering services previously delivered by the state. A strategy which has delivered a tripling in the number of unemployed from 3 million in 1994 to over 9 million today.

So the SACP supports what Ramaphosa represents: a move away from the clientelist, cronyist Zuma politics, towards a restoration of South Africa to the more “normal” global circuits of capital. This of course dooms South Africa to remain a dependent economy, digging and exporting rocks, with a growing number of impoverished people, the very people that the SACP would claim to represent.

So, if the ANC cannot, in any shape or form, represent the future, what is the way forward?

There have been a number of calls recently for the formation of a “broad left” – enough, at any rate, to provoke Numsa’s Irvin Jim to attack this “broad left” as a force for disintegration and liquidation of clearly socialist objectives and the leadership of the working class. The recent calls have come from a number of sources. In the Amandla! Debate earlier this year, Noor Nieftagodien said clearly:  “Where we need to place our energies is in the creation of a left block”. Zackie Achmat recently echoed this when he called for: “a totally new political realignment in 2019 where a left front emerges, whether it is with the communist party, with the EFF… [or] a new, a different part of the ANC.”

So the desired trajectory is clear. In fact it is quite similar to the “Numsa Moment” of 2013 – their version was to build a “Movement for Socialism”, rather than a left front, and a United Front as a version of the popular movement.

But all of this schematic imagining begs the key question – what are the politics and what is the strategy that will bring us together into a force capable of challenging the current political crisis and ultimately of challenging for power? 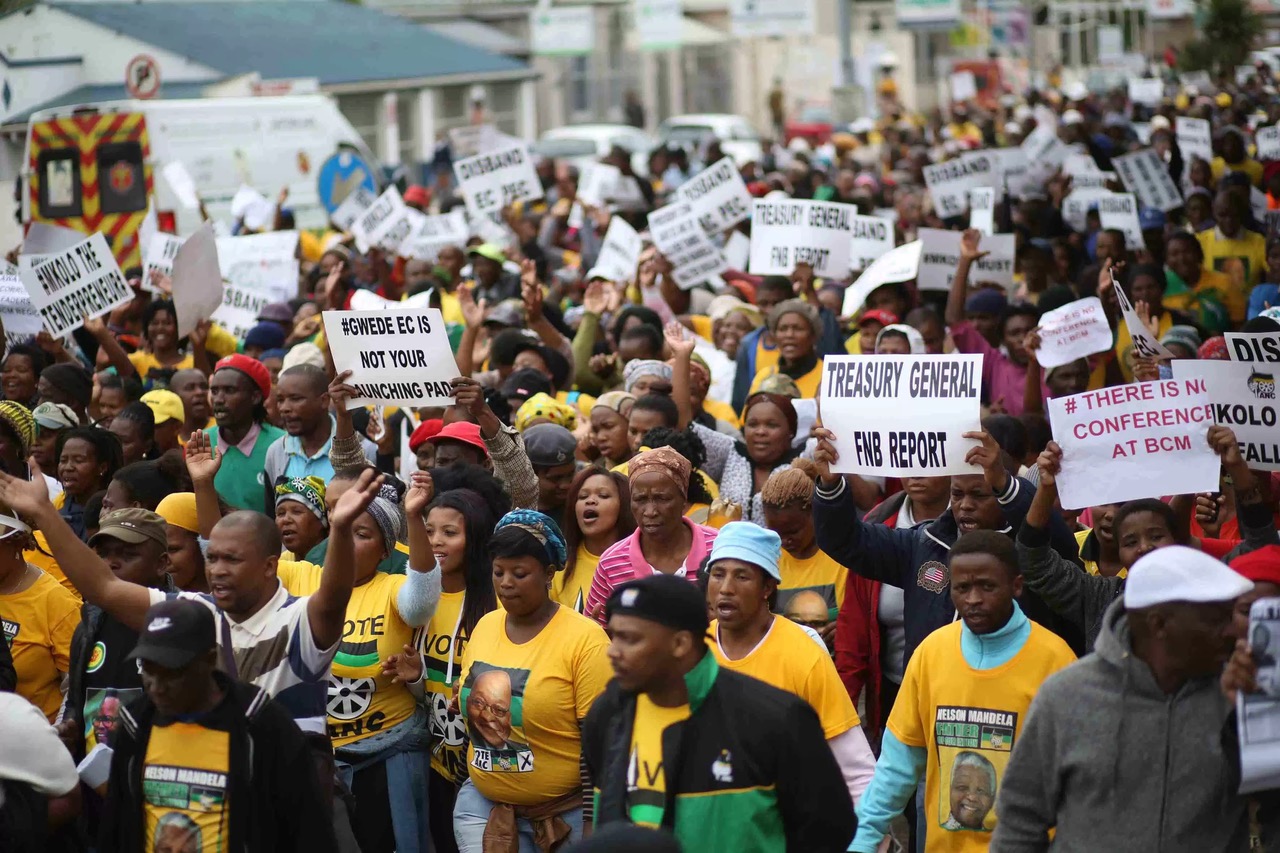 ANC members marching on the E.Cape provincial office. The ANC will have nothing to do with getting us out of this mess except as an obstruction. Riven with competing factions and material interests, the organisation can only take us deeper into the mess.

Despite all the revelations of state capture, there are no spontaneous expressions of outrage. We need to understand the reasons for the passivity of the working class. Any working class political project that addresses the mess we are in has to understand this situation if it is to have a realistic chance.

There is clearly an understandable disenchantment with what pass for “political organisations”. We saw this in the attitudes of the student movement. We have seen it in the labour movement, where Amcu, for example, has grown whilst maintaining a strict non-alignment policy that has so far even kept them out of Saftu..

And of course there are the material conditions of job insecurity, massive retrenchments and an inability of the trade union movement to mount an effective fightback against job loss.

Towards a strategic direction for the left.

The way forward must lie primarily in the development of independent mass organisations of the working class. We put forward some thoughts of what we need to do to get out of this mess:

None of this is possible without sustained activist development and political education in order to build a critical mass of conscious, confident, capable and effective activists who can carry the massive tasks ahead.