By: Simon Allison. From: Daily Maverik

Like Britain’s departure from the European Union, South Africa’s decision to withdraw from the International Criminal Court is an abrupt step backwards from the international community and the ideals it is supposed to represent. And, like Brexit, that decision was premised on half-truths and misunderstandings designed to protect political elites at the expense of society’s most vulnerable.

Brexit happened. The British public voted to leave the European Union, and they did so for a host of excellent reasons: foreigners were stealing citizen’s jobs; the EU was costing Britain a staggering £350 million per week; Britain’s access to the European market would not be affected.

Unfortunately, little of this was true. We live in the age of post-truth politics – maybe there was never an age pre post-truth politics – and only hours after the vote the Leave campaigners were backpedalling on their promises. That £350 million figure had been made up; European leaders are refusing to countenance single market access without free movement of people; and Britain could actually lose jobs as global brands and companies prepare to relocate. 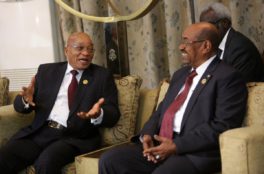 On a pack of half-truths and misunderstandings, Britain had chosen to abandon the European project, one which, despite its many flaws, has delivered decades of peace and prosperity to the European continent.

Which brings us to South Africa, and the government’s recent decision – made unilaterally, without prior announcement or public consultation – to withdraw from the International Criminal Court. This is South Africa’s very own Brexit, the moment when we turned our back on a key pillar of the international community and the ideals that it is supposed to represent. Unlike Brexit, however, this momentous decision was made by a tiny political elite, without South Africans or their elected representatives getting the chance to vote on it.

Like Brexit, however, we did so to further the self-interest of that elite. Like Brexit, the arguments made to support the decision are based on half-truths and misrepresentation, and cloaked in dangerous hyper-nationalism (of which pan-Africanism, in the wrong hands, is a strand) which serves only to obscure the real issues at stake. And, like Brexit, the potential consequences will reverberate far beyond our borders.

But before we get there, let’s remember where the impetus for South Africa’s withdrawal from the ICC came from. After all, up until just a couple of years ago, South Africa was among the Court’s most enthusiastic supporters. South Africa was an early signatory to the Rome Statute which established the Court, and South Africa’s influence helped to ensure that Africa was the best-represented continent amongst all member states. This was in line with Nelson Mandela’s idealistic vision for South African policy, which said it should be motivated not by blunt national self-interest, but by considerations of human rights and international justice instead.

And then came Kenya’s post-election violence of 2007 and 2008, where more than a thousand people were slaughtered in weeks of brutal violence. Hundreds of thousands more were displaced from their homes, and thousands of women and girls were raped. In the wake of these atrocities, the ICC – for the first time on the African continent – exercised its discretion to unilaterally investigate crimes against humanity committed in a member state.

The ICC issued six arrest warrants in 2010. Among the wanted were politicians Uhuru Kenyatta and William Ruto, who would in 2013 become Kenya’s President and Deputy President, respectively.

The pair used every function of state to combat the charges against them. Kenyan officials stopped cooperating with the state; witnesses were bribed to withdraw their testimony, and those that couldn’t be bought were killed; and Kenyan diplomats were instructed to tour the continent in an effort to convince other African leaders that the court was biased against Africans and therefore illegitimate. They took the spark of resentment created by the earlier charges against Sudanese President Omar al-Bashir, and fanned it into a continent-wide anti-ICC bonfire.

This point is crucial: the entire African campaign to discredit the ICC was created by the men seeking to escape its censure. And it is little surprise that they received such enthusiastic support: there are plenty of African leaders who are rightly concerned that one day the Court may come for them. The anti-ICC sentiment in Africa is rooted in naked self-interest.

And in constructing this anti-ICC campaign, Kenya and its allies relentlessly pushed half-truths and misunderstandings designed to destroy the Court’s legitimacy, most prominent among them the idea that the court is biased against Africans. Sure, it looks bad: the ICC has only ever charged Africans. But that’s mostly because (in 5 of 8 cases) African countries have requested the investigation, knowing their own judiciaries are not capable of delivering justice to victims.

African countries are not being persecuted by the court. They are, in fact, benefitting from it the most.

But even if we assume, for the sake of argument, that the court is biased, who are the victims of this bias? The likes of Kenyatta, Bashir, Congolese warlord Thomas Lubanga – convicted of using child soldiers – and Lord Resistance Army boss Joseph Kony, who is wanted for murder, enslavement, sexual enslavement, rape.

It speaks volumes that South Africa is prepared to stand up for the rights of these men, while depriving their victims of any chance of justice.

Another half-truth: that there is an African alternative. There isn’t. The proposed African Court on Justice and Human Rights exists on paper, not in practice, does not exist yet, and won’t for another decade at least. Among other constraints, it is simply too expensive. African countries are notoriously unwilling to commit serious funding to continental projects – the African Union is more than 50% funded by foreign donors – and the African Court needs tens of millions of dollars per year to get going (the ICC, for example, operates on an annual budget in excess of $140 million).

Besides, even if this court does come into being, it cannot investigate or charge heads of state and senior government officials, who have immunity as per a recent African Union decision. So if your government is committing crimes against humanity – well, tough luck.

None of this is to say that the ICC is perfect, or cannot be improved. It needs to do plenty of work to overcome the superpower politics which leave it unable to investigate crimes committed by western leaders, for example, and it needs to moderate the influence of the United Nations Security Council on its decision-making processes.

South Africa, as a continental leader with a constitution rooted in human rights and equality for all, could and should play a major role in driving these reforms. This would really show its commitment to international justice. Instead, by departing, South Africa will undo any progress the ICC has made in Africa, with many other African countries now likely to follow its example.

This really is South Africa’s Brexit moment. To protect a handful of political elites, South Africa has voluntarily abandoned a progressive international institution which – for all its clear flaws – is doing more than any other to deliver justice to African victims of genocide, atrocities and human rights abuses. In abandoning the ICC, South Africa is abandoning the continent’s most vulnerable people too.