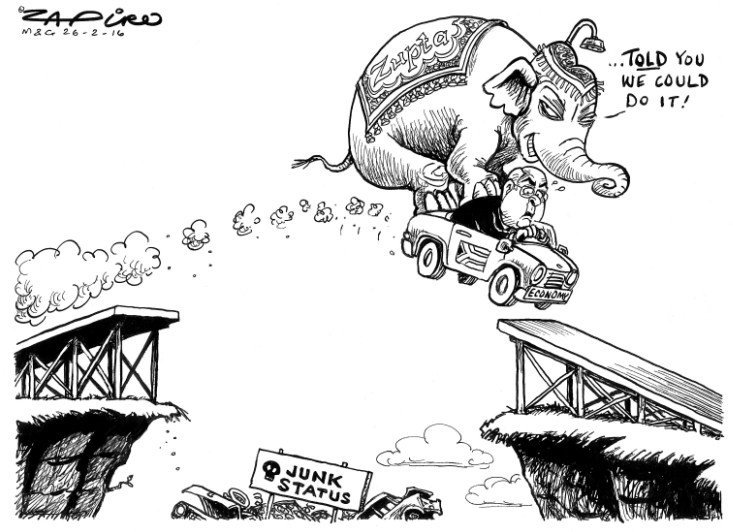 Since Nenegate, 9 December 2015, we have all become extras in a Hollywood Thriller – “Apocalypse Downgrade”.

The hero of the movie is our own dashing Pravin Gordhan. His adversary, the wicked but mysterious Standudnpho. Will the mighty Pravin successfully defend us all against the immensely powerful Standudnpho, from the alien race of the Rating Agencies? Or will the Rating Agencies decide to punish us?

Who are these Rating Agencies?
There are three of them. Standudnpho is in fact Standard & Poor’s. That’s the one that was judging “us” last week. The one we had to charm so they would see all the good we are doing to restore the country’s integrity. Then there is also Moody’s and Fitch. Standard & Poor’s and Moody’s are the two big ones. They both belong to large American corporations involved in financial services and media. They are all recognised as rating organisations by the US Securities and Exchange Commission – the government agency responsible for regulating trade in shares and other financial instruments.

Their aim is to provide investors and the public with an opinion about the quality of credit of governments and corporations. If you want to be technical about it, they assess the capacity and willingness to pay in full and on time existing and future debts.

Until the early 1970s, it was investors who paid the ratings agencies for their work. Investors wanted to know what to invest in. The agencies told them what was a good bet. Investors needed honest, good quality advice. So that kept the agencies reasonably honest.

Then, starting in the early 1970s, the big three agencies began to receive payment for their work from the other side – those who wanted to borrow the money (the ones who “issue the securities”). Their interests are completely different. They don’t have any interest in honesty or quality. They are interested only in getting the highest rating possible so their borrowing is cheaper. That means they must look good to the investors.

That raises serious questions about the integrity and reliability of these powerful agencies. After all, they did give top ratings to investments which crashed in 2007 and 2008.

What is “downgrade to junk”?
We have heard a lot about “downgrade to junk”. We know that “junk” is rubbish. We’re being told that “we” are in danger of being regarded by the rest of the world as rubbish. That doesn’t feel good at all. We forget that what pleases the Ratings Agencies will condemn us to more poverty, unemployment and inequality. So we actually feel a lot better when, after being kept in suspense for days, we finally hear the wonderful news. “We” are not rubbish, after all.

Or at least … And here is where we hear the dire warnings. It’s not over yet. We survived this time. But the dreaded Ratings Agencies will return. The danger is ever-present. So it’s a similar feeling as when Bafana Bafana finally win an African Cup of Nations qualifying match…after they have already been knocked out of the tournament.

In fact, there are broadly three categories of investment:

How do they decide about “junk” status?

We can find out what is important to Ratings Agencies by looking at their reports.

The latest Standard & Poor’s report on South Africa includes the following in its overview:

In the entire 13 page report, unemployment is mentioned only twice – both times as a side issue.

So, the Rating Agency recipe is clear – tighten your belts; limit public spending to reduce borrowing; reform labour laws so there is more “flexibility” and fewer strikes.

Let the poor pay for the crisis so that the investors of the world can make more profit. Then they will have more confidence in “us” and will lend at a lower rate of interest. We have all been hijacked. We have been made desperately to want the Ratings Agencies to rate us highly. But in order to rate us highly, they must increase the rate of exploitation – workers must be made more vulnerable and public spending must be reduced.

So we are hoodwinked into desiring our own increased exploitation. And the biggest irony is that these Ratings Agencies have repeatedly been wrong.

• Enron was one of the world’s major electricity, natural gas, communications, pulp and paper companies. It employed 20,000 workers. It claimed revenues of nearly $111 billion in 2000. All three agencies rated Enron as investment grade just weeks before it went bankrupt.
• None of the Credit Ratings Agencies saw the financial crisis and the collapse of the US major investment banks coming. The financial firm, Lehman Brothers, became famous for their top aaa rating on a Friday in September 2007. On the Monday they went bankrupt.

Meanwhile, the real problems are clear there are nearly 9 million unemployed people in South Africa. And that number is growing. There is massive growth in the precariat – vulnerable workers who have poor pay and working conditions and little job security. The irony is that it is precisely the policies that the Ratings Agencies are demanding to ensure a favourable rating that are behind worsening unemployment, inequality and poverty in SA.

The strategic direction for the economy has left it acutely vulnerable to the collapse of the commodities markets.

The current level of “growth” means that the number of unemployed people will continue to grow. We can only imagine what the economy would have looked like if the commodities super-profits of the 2000s before the crash had been invested in production. But instead, they were dished out to shareholders.

All along, the SACP has supported the ANC government in implementing the strategy that has brought us to the point where the economic and social crisis has now matured into a deep political crisis involving the President of the country – a President the SACP sold to us as an anti- neoliberal alternative to Mbeki. They have supported the National Development Plan that wants to make the situation worse for workers by taking away protection, just as the “socialist” government of France is now doing in France.

So, in the face of this immense social and economic crisis, what does the SACP have to say?

The Guptas, then, are simply thieves. They engage in no productive activity. They just loot. Now that we have established what distinguishes them from Cyril Ramaphosa, for example, we can march against them. They are the first enemy. We must clear them out of the way so that we can then take on the real enemy: “Unless we deal decisively with the parasitic bourgeoisie, our ability as a democratic state and popular movement to confront our principal strategic opponents (monopoly capital) will be eroded.”

We will cheerfully ignore the edifice of corrupt appointments in the state’s investigative and prosecuting services, all of which the SACP has championed. We will ignore the facilitation (and facilitators) of corruption. We will ignore, at least for the moment, global capital and its bee parasites. We will just march against the looters.

That leaves a huge space to the left, which the EFF is running to fill. And it deepens the political crisis for the SACP. Its dependence on the ANC becomes even clearer. It cannot sever its parasitic link with the ANC without losing its membership. So in the end it is limited to cheering on Pravin Gordhan in his battle against the Guptas and their friends, leaving the real issues to others.

WATCH | A great video from @UhuruDigitalZA explaining why we need to transition away from carbon based energy prod… t.co/AK0JcYapu6

Retweeted by Amandla!
5 days ago

"We have a very rich history of cultural work being revolutionary, and being involved in activism, and in education… t.co/hjnGKJMRHR