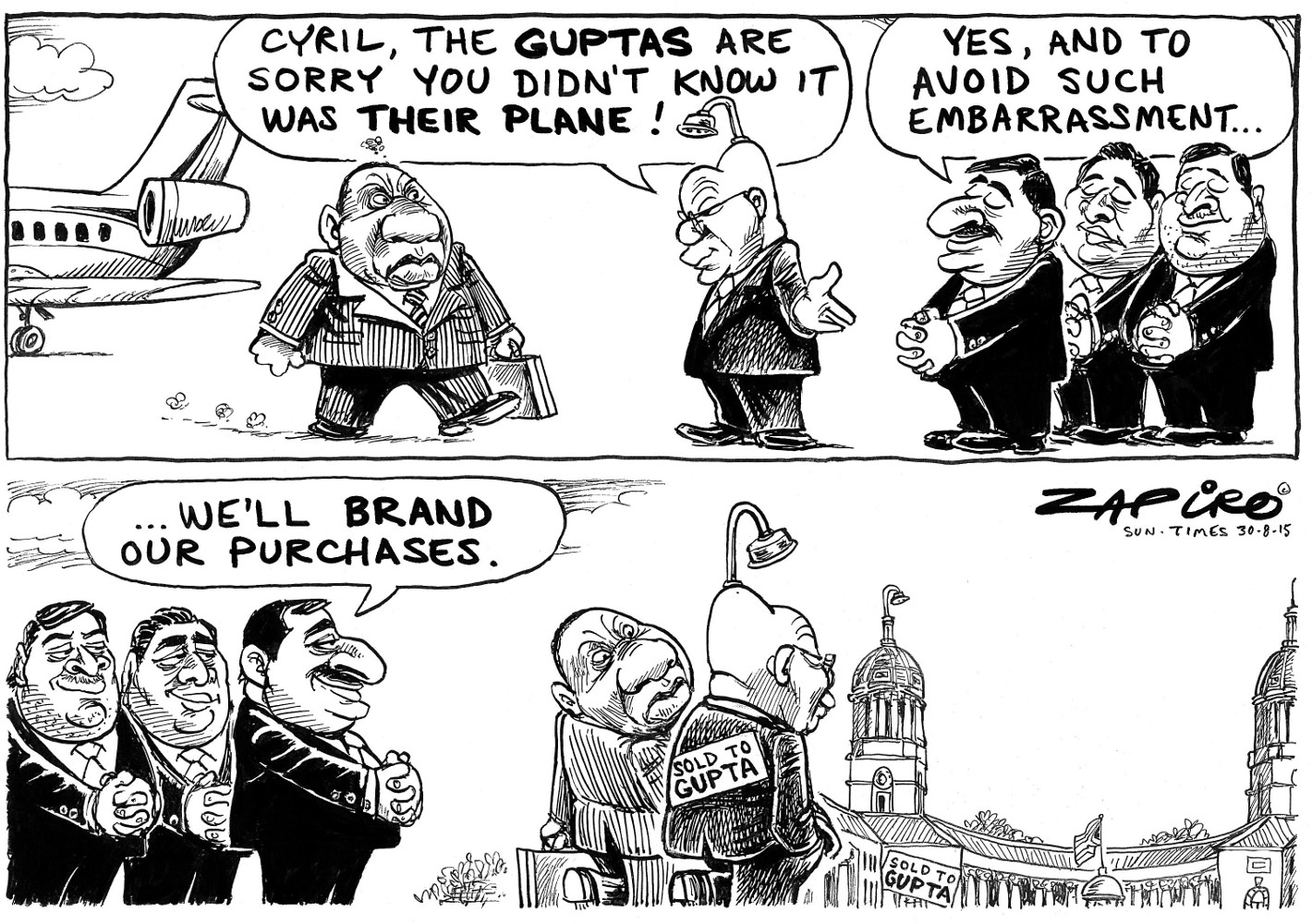 Will the SACP go down with Zuma?

There were three people who were key to Jacob Zuma winning the presidency of the ANC and the country: Cosatu General Secretary Zwelinzima Vavi, ANC Youth League President Julius Malema and SACP General Secretary Blade Nzimande.

Of the three, only Nzimande remains in the fold. Vavi had to sustain an unrelenting and systematic attack for becoming critical of the Zuma regime, especially its cronyism and corruption. He warned in 2010 about a predatory elite and the prospect of a predatory state. Clearly these warnings have resonance in the current debate over state capture by the Guptas and Jacob Zuma.

Malema, has gone on to form the most dynamic of radical mass political movements, the Economic Freedom Fighters, following his and others’ expulsion from the ANC Youth League.

So it has been left to Nzimande and his SACP to play the sycophantic role of defending Zuma and deflecting attention from the ascendant predatory elite, of which the Guptas are just one element. Nzimande’s fawning over Zuma brought him into Zuma’s inner circle. From that privileged position, he and his comrades systematically chose to close their eyes to the process of state capture a la Gupta.

Instead of seeing what was in front of their noses, they chose to find alternative targets. They turned on the challengers on their left. They presented Malema and his lieutenant Floyd Shivambu as the real tenderpreneurs. They directed almost as much invective at the Numsa general secretaries, Irvin Jim and Karl Cloete. They accused them of “business unionism”, and of being business partners.

The process reflects contamination by prejudices. This is evident in what clearly appears to be some sort of a politically charged agenda involving possible collaboration with anti-majoritarian liberals, using a report which is yet to be released as a platform to ferment negative sentiment against the president, and by extension the revolutionary alliance of our people as led by the ANC as well as the democratically elected government that it leads.

Now, evidence of Gupta capture of Zuma and contamination of political process is out in the open. Their role in the appointment of government ministers and state officials has been revealed. And the SACP is standing with its pants around its ankles.

Their position has been entirely hypocritical and self-serving. Only now, when the Zuptas have begun to move against SACP ministers and other state officials, do they call for a judicial commission of enquiry. Just before the firing of Nene, there was a strong indication that ministers who are members of the SACP, including Jeff Radebe, Rob Davies and even Nzimande himself, were to be replaced in a major cabinet reshuffle. The purpose was to consolidate the power and influence of the so-called Premier League – a powerful faction driven by three ambitious provincial premiers, Ace Magashule, David Mabuza and Supra Mahumapelo. The Premier League is a political cabal seeking to ensure its people are appointed to key positions in ANC structures – much like the SACP’s politburo, in fact.

In the 1930s. Martin Niemöller commented on the cowardice of all those who remained silent during the rise to power of the Nazis:

First they came for the Socialists, and I did not speak out— Because I was not a Socialist.

Then they came for the Trade Unionists, and I did not speak out—

Because I was not a Trade Unionist.

Then they came for the Jews, and I did not speak out—

Because I was not a Jew.

Then they came for me—and there was no one left to speak for me.

Now they are coming for the Communists. Who will speak up for Nzimande and his comrades?

In a factionalised ANC, soon to approach its elective conference, they may not have this problem. There is already a strong indication that the SACP has attached itself to the presidential ambitions of Cyril Ramaphosa. They will use their considerable influence to ensure that he replaces Zuma, either at the ANC 2017 Conference or earlier, should an attempt at a recall be made. In this they behave like the modern day Afrikaaner Broederbond.

It is clear that Ramaphosa is being championed by big business – what the SACP like to call “white monopoly capital”. And yet they have no hesitation in aligning themselves with this “white monopoly capital” to ensure Ramaphosa is made the next President of SA. How can a self-proclaimed “socialist” party support a mining magnate heavily implicated in the massacre of workers? This is stretching even the SACP’s customary level of opportunism.

And this brings us back to the issue of state capture.

The queue of state capturers is a long one

State capture is not new. The capture of the post-apartheid state began before the first democratic election. The political organisations which formed the government had already signed agreements which tied the government’s hands. They included, for example, an agreement to repay foreign debt incurred by the apartheid government and to reduce tax on corporations.

But that was at a general level, you might say. Now we have a specific phenomenon – an undemocratic, unelected interest group deciding who gets posts in cabinet. Have we forgotten who decided that Derek Keys would be re-appointed as finance minister after the 1994 election? Or Chris Stals as Governor of the Reserve Bank?

And of course it happened again, blatantly, last year, under the pressure of the markets and credit ratings, during the week of the three finance ministers. To the overwhelming applause of all those who attack Gupta state capture. Over the weekend following the appointment of Des van Rooyen, the President had a number of meetings. The decisive one had an interesting cast of characters:

An hour after the meeting the President had changed his mind, moved Des van Rooyen to Co-operative Governance and re-installed the neoliberal, Pravin Gordhan. Gordhan’s task was to do the bidding of finance capital, rather than the Guptas.

There is no longer a question of whether or not the state is captured. It will be no less captured if the presidency is occupied by Lonmin’s/Glencore’s captive, Cyril Ramaphosa. Or Gold Fields’ captive Baleka Mbete. Or Samancor’s captive Gwede Mantashe.

State capture is the wrong issue

So what is the new problem, if it is not state capture? The problem is the form of this “state capture” – flagrant violation of the rule of law for individual enrichment. What we have been witnessing over the last seven years is a President who has illegally used the state to enrich himself and his friends and family. Part of that illegality has been to mould institutions of the state to protect him. With the compliance of the SACP, he has changed institutions which might challenge him (the Scorpions) and replaced independent prosecution and law enforcement officials with compliant ones (too many to name).

Whatever our class critique, we support bourgeois democratic freedoms, even if we have no illusions in their class nature. We support them because they give us better conditions than dictatorship and fascism to fight for our strategic objectives. Mazibuko Jara, then spokesperson of the SACP, made this point in his 2007 critique of the Party’s role in supporting Jacob Zuma, What colour is our flag? Red or JZ?.

A bourgeois democratic framework, unlike fascism or no rule of law, provides the best conditions under capitalism under which the working class can hope to struggle for its short- and long-term interests.

Jara went on to question the Party’s support of JZ. He was expelled for subjecting the Party’s position to this critical analysis – an analysis which history now so clearly supports. Backing JZ won rewards for SACP leaders, but at a price. Those leaders have closed their eyes (and their mouths) as the conditions for working class struggle (and the conditions of the working class itself) have gone steadily downhill.

The SACP has abandoned the politics of class in favour of the politics of faction. Instead of rooting their future in the interests of the working class and the poor, they are gambling on a factional Ramaphosa victory. Zwelinzima Vavi recognized his error at Polokwane and apologized for it. The Party seems determined to repeat it.

WATCH | A great video from @UhuruDigitalZA explaining why we need to transition away from carbon based energy prod… t.co/AK0JcYapu6

Retweeted by Amandla!
5 days ago

"We have a very rich history of cultural work being revolutionary, and being involved in activism, and in education… t.co/hjnGKJMRHR