Women from Somkhele and Fuleni at the WoMin-led “Women Stand their Ground against Big Coal” Southern African exchange. Women carry the burden of the impact of coal extraction, combustion and ultimately climate change. They live in patriarchal communities where they are given primary responsibility for domestic work and care responsibilities. Men in their families and communities benefit from this unpaid labour. But so too do the corporates which save costs from the unpaid labour of women and girls. This is part of the logic of a capitalist system that steals and exploits to maximise profit. The South African government also benefits from women’s unpaid labour. Women “fill in” for absent public services related to water, healthcare (including homebased care of HIV positive people), education and general provisions for social security of the young, sick and elderly. 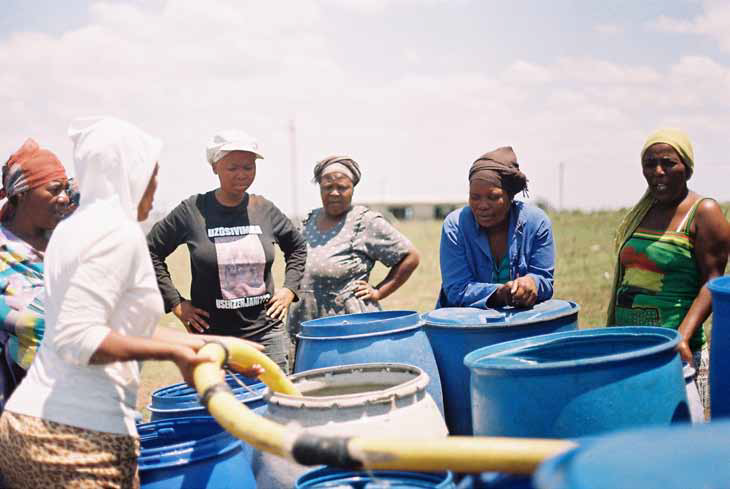 Women filling barrels from the waterkan at Somkhele.

In the communities of Somkhele and Fuleni, in drought-stricken northern KwaZulu-Natal, women are a powerful leading force in the resistance to coal mining. The enormous environmental and social costs are mainly carried by women. They include the costs of extraction as well as the longer-term effect of climate change from burning the coal for energy. This region was declared a disaster area in 2015. The drought is due to the El Niño weather phenomenon which is more severe because of climate change.

In the last six months, leading women activists in both these communities have begun to strengthen their organising, using water as the entry point. Their organising addresses the water grabs by Somkhele’s Tendele mine, the deepening drought, water pollution, and very importantly corruption and illegality surrounding water services provided by the local municipalities. They have researched and documented the impacts of these processes on their communities, and on women in particular. They have brought many more local women into the movement through the research, through local meetings, through door to door visits, and more recently through a Women’s Water Assembly on 12 August 2016.

A water focus has been politically strategic. It transcends community divisions around the mining, addresses the very practical concerns of women, and makes clear the linkages between coal mining and combustion, water grabs and drought. Coal mines cannot operate without a guaranteed water supply. So a local and national campaign on water could stop the mines. The campaign includes a possible legal challenge to water licences under serious drought conditions.

Coal mining, water grabs and drought in Somkhele and Fuleni

The combined effects of the mining and the drought have created multiple crises for the Somkhele community. When the Tendele mine commenced its operations there in 2007, traditional communal water sources – a river and dam – were fenced in so that the community could not use them. Soon after start-up, Tendele began pumping water out of the Mfolozi River, and the little water remaining has dried up in the last two years, due to a series of droughts. The Mfolozi catchment is a critical source of water for an estimated 2-million people and their farming activities. It is reported that Tendele operated without a water licence for at least its first three years of operation.

The drought in Somkhele, and across the whole northern KZN area, is severe. It has left communities with no water. They rely on water tankers provided by the municipality and private water companies. The carcasses of livestock are strewn across the landscape. Government has failed to provide emergency water supplies for people and their livestock.

In contrast to all of this, in March 2016, Petmin announced that Tendele, Women defending water, land and life in northern KwaZulu-Natal having exhausted surface water supplies, would start to exploit underground water aquifers to “wash coal” for export. This would allow the mine to operate its three plants at maximum capacity for a full year to “service the market”. In November/ December 2015, the Tendele mine scaled up its operations, forcibly relocating more than a hundred families. Government has permitted all of this, despite a severe drought.

In Fuleni, there is a total population of between 12 600 and 16 000 people. They will be directly affected by Ibutho coal’s proposed open cast coal mine. In its first phase, 992 people will be relocated. The most serious impact of the Ibutho mine will be that the already acute water shortage will get worse. The proposed mine will use at least the equivalent of 56 municipal swimming pools of water a day to operate. Farming has historically been a main source of livelihood to the Fuleni community. The drought has devastated local agriculture and decimated livestock, which is one of the main forms of saving amongst rural peoples. The coal dust from the Tendele mine in Somkhele is, in part, blamed for the erosion of local farming.

“We have been reduced to animals now. Our lives do not matter, that is why no one cares about our suffering over water,” says a woman community member from Somkhele. “The water taps are mere decorations now, nothing ever comes out.” 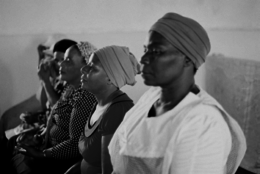 Women from Somkhele and Fuleni at the WoMin-led “Women Stand their Ground against Big Coal” Southern African exchange.

Since June 2016, ten leading women activists from Somkhele and Fuleni have been involved in WoMin-supported participatory action research (PAR) addressing the water question locally. The research has been important for women leaders to build knowledge and understanding. They have been able to reach out to other women in their communities on the “safe” issue of water. Organising to oppose mining in both Somkhele and Fuleni has become “dangerous” with rising intimidation, threats and attacks on community members who oppose the mine. A focus on water guarantees some space and safety to those organising a broad movement for energy, food and water justice.

Some of the core issues surfaced in the PAR include:

• The long distances, up to 6 hours daily, which women walk to fetch water. They are regularly sexually harassed, threatened and cases of rape have been reported.
• How unsafe the water is and how “purification” methods – such as adding bleach (JIK) and cement – make the water even more dangerous. Mine security are also permitting women to fetch water from the slimes dam for general cleaning and washing. This results in significant exposure to highly toxic chemicals.
• Water scarcity, combined with water and air pollution and the effects of the drought, have destroyed local farming. This has led to rising hunger and poor nutrition.
• The municipal tankers (waterkan) provide water once a week but they get empty before water has reached all the residents. Residents are paying ZAR 500 (USD 35) for 5 000 litres of water. There are also serious allegations that municipal staff are selling water to local residents in clear violation of the constituton and government’s own Free Water Policy.
• Women in the communities have tried to take their concerns about water to the traditional leaders, who have generally failed to respond. Instead women have been punished, by fines, for subverting the ‘rule’ that women cannot bring matters directly to male traditional leaders.
• Local councillors “punish” local antimining activists and their families by “instructing” municipal waterkan drivers to exclude them from water deliveries.

On 12 August, more than 70 women from Somkhele and Fuleni gathered at a Women’s Water Assembly at Mbonambi to receive the initial findings from the team of community researchers. They received information about their water rights, and planned actions against water grabs and corruption and for a safe and regular water supply.

Women have resolved to act together and target the municipalities to end corruption and fulfil their responsibilities to implement the Free Water Policy. As a Somkhele resident said: “I would like to ask the Municipality, councillors and officials how they feel that they bath every day and have safe water and my family and I do not.” They also wish to publicly denounce the water licence at Tendele mine and contest the issuing of a water licence for Ibutho Coal at Fuleni. This organising effort will include the start of legal action against government on water licencing under drought conditions.

This campaign will present a powerful challenge to the mining companies who cannot operate without a secure supply of water. The local campaign links into a wider, women-led campaign on fossil fuels, energy and climate justice which WoMin is supporting in South Africa, Uganda, Nigeria and the Democratic Republic of Congo.

The corporates and their representatives in government advance an energy system and a development model which is “trying to kill us” as a Fuleni activist put it. Women in Somkhele and Fuleni, alongside many others in their communities, stand in opposition, on the side of a decent life, and for justice and humanity!