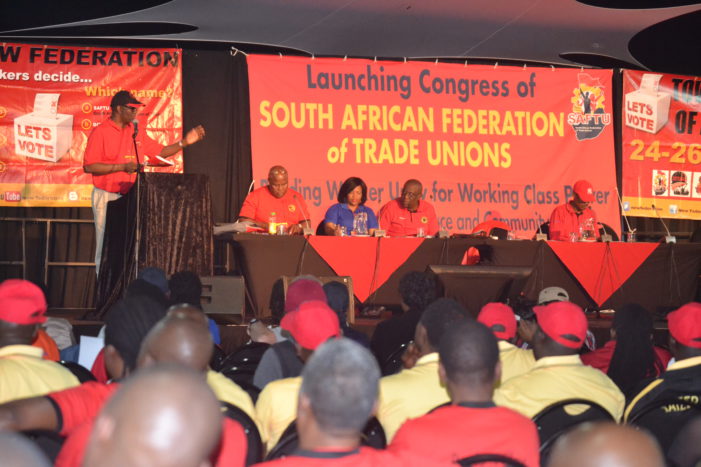 It is a great honour and privilege to be asked to deliver the opening address of such a momentous event. The long wait is over. The new dawn has broken. A milestone has been reached in the history of the South African trade union movement.

As the Steering Committee report documents in great detail, this congress could not come at a more crucial time. Workers face the most serious crises since the end of apartheid. Unemployment is at one of the highest levels in the world, and now thousands more jobs are now under threat – in Eskom and related transport services, the chicken industry, cold drinks manufacturing and the media.

More and more of the jobs that remain are insecure and low-paid, as formerly permanent jobs are lost through outsourcing, casualisation and exploitation by labour brokers.

An army of vulnerable and marginalized workers is growing fast. Employers and the government are striving to sabotage collective bargaining and drive down wages to the lowest level which desperate workers will be prepared to accept. They are moving through Nedlac to restrict our basic, constitutional right to strike.

Yet just when there is a greater need than ever a strong, militant trade union movement, the existing ones are fragmented and weak. According to the Department of Labour, in February 2016, there were 182 unions registered in our country, with another 400 unions were waiting to be registered.

There are also thousands of workers in unions which are letting them down, workers who are demoralised by their leaders’ inactivity and opportunism, especially those in COSATU, who are embroiled in factional battles within the ANC and government and have failed to wage any fightback against their allies’ pro-capitalist and anti-worker policies.

Worst of all, more than three quarters of workers are not organised in any union at all, most of them in the most vulnerable sectors – part-time or casual workers who have no permanent employer of workplace, farm and domestic workers, the very workers in the greatest need of a strong trade union.

That is why one of our main tasks over these three days is target these vulnerable workers, to revive their hopes and give them a route out of their misery. We must recognise the changing nature of the labour force, move beyond traditional areas of scope and recruit these vulnerable, unorganised workers.

As the Steering Committee report says, “We must rise above the petty squabbles that often characterise relations between unions and federations. Our country, our continent, and indeed the workers of the world, are going to be faced with monumental challenges over the next period. We have to be a beacon that attracts all workers, regardless of their union traditions, back to the front line of the class struggle.”

In 2014 members of the COSATU Central Executive Committee voted to expel 340,000 members of NUMSA, and in 2015 to dismiss its General Secretary, Comrade Vavi. A group of COSATU affiliates which opposed these decisions, later to be known as the “9 plus unions”, worked together to try to restore democracy, accountability, worker control and political independence to COSATU.

Meanwhile hundreds more members and officials were expelled from individual COSATU affiliates, many of them for exposing corruption and the embezzlement of union funds, others for their opposition to the COSATU leaders’ policy of propping up a dying and irrelevant Alliance, and an ANC and SACP that had abandoned their historical mission.

It became clear, particularly after the two disastrous COSATU Congresses in 2015, where FAWU and other members of the 9-plus fought bravely to turn the tide, that the leadership clique of COSATU would never accede to demands for worker unity, democracy and independence. They were never going to be the driving force for workers’ unity and or fulfill the historic call for “One Country, One Federation”.

A new force for workers’ unity started to emerge. Discussions began between the Presidents of NACTU, FEDUSA and the former General Secretary of COSATU, who mutually agreed to convene a meeting of all unions that endorsed certain principles, including that the unions must be independent from employers and political parties, worker-controlled and democratic.

A historic meeting on 7 September 2015, attended by 26 unions, agreed to search for unity on the basis of trade union independence and democracy. This meeting laid the basis for working towards a Workers’ Summit and the eventual formation of a New Trade Union Federation.

A Steering Committee was elected, comprising leaders of all participating trade unions.

Unfortunately almost immediately after the establishment of the Steering Committee, FEDUSA backed away, without ever making a written commitment to the New Federation and its principles.

NACTU remained in the Steering Committee and participated, together with some of its affiliates (including AMCU) in the magnificent Workers Summit, which took place 30 April 2016, attended by 1500 trade union representatives, representing 52 unions attended together with 22 civil society organisations as observers.

NACTU also participated actively in the May Day Rally convened by the Steering Committee the next day, 1 May 2016. However, it then also retreated, as did Solidarity, who enthusiastically attended the Workers Summit and endorsed its final declaration, but then retreated, apparently back into the Afrikaner Laager coordinated by Afriforum.

The Workers Summit adopted a declaration called for concrete steps to be taken to launch a new, militant independent trade union federation and agreed to adopt the following founding principles, which of course you, at this launching congress, may endorse, amend and or reject.

1. Independence: Unions must be independent from employers (in the private and public sector) and from political parties. This does not mean that unions are apolitical.

2. Worker control and democracy: Unions must be worker-controlled and practise democracy, accountability, transparency and be tolerant. Within the federation affiliates must have autonomy but not independence, but differences of opinion must be tolerated.

3. Non-racialism and non-sexism: Unions must fight for the maximum unity of all workers and reject all divisive and negative sentiment such as xenophobia etc.

4. Financial self-sufficiency, accountability, and opposition, in word and deed, to business unionism, corruption, fraud and maladministration within its own ranks and in society as a whole.

5. Anti-imperialist and Internationalist: Unions must place a high priority on international solidarity.

6. Socialist orientation: Unions must be ready to engage in the transformation of our societies to counter capitalist exploitation, inequalities and poverty.

7. Militancy in fighting for the working class and the poor: Unions must be ready to actively campaign for change, and made links with all of the oppressed South Africans.

8. Effective organisation and representation: Unions must organise in the most effective manner to represent workers and serve their interests.

9. Solidarity: with all workers in struggle for better wages and conditions or to save jobs

To prepare for this congress of the New Federation, the Steering Committee on 7 March 2017 applied for registration with the Department of Labour, under the name of the South African Federation of Trade Unions.

All documents, including membership affiliation, were found to be in order, and the Registrar wrote to the Convenor of the Steering Committee on 23 March 2017 to state that the registration application was successful and the registration was gazetted on 31 March 2017. Should the congress decide to adopt a name other than SAFTU, the name change will be submitted to the Registrar.

We still face immense challenges, which the new leadership will have to confront urgently, because time is not on our side. We have to confront the quadruple challenge of unemployment, poverty, inequality and corruption and revive the trade union movement.

If workers cannot turn the tide and fight back against their appalling conditions of life, we shall slide into a new age of barbarism, and even worse exploitation of the working class and the poor.

I wish you all a highly successful congress. It must be the starting moment of a new era of progress towards the realisation of the ideals of the Freedom Charter and the emancipation of the working class and the whole of humanity.