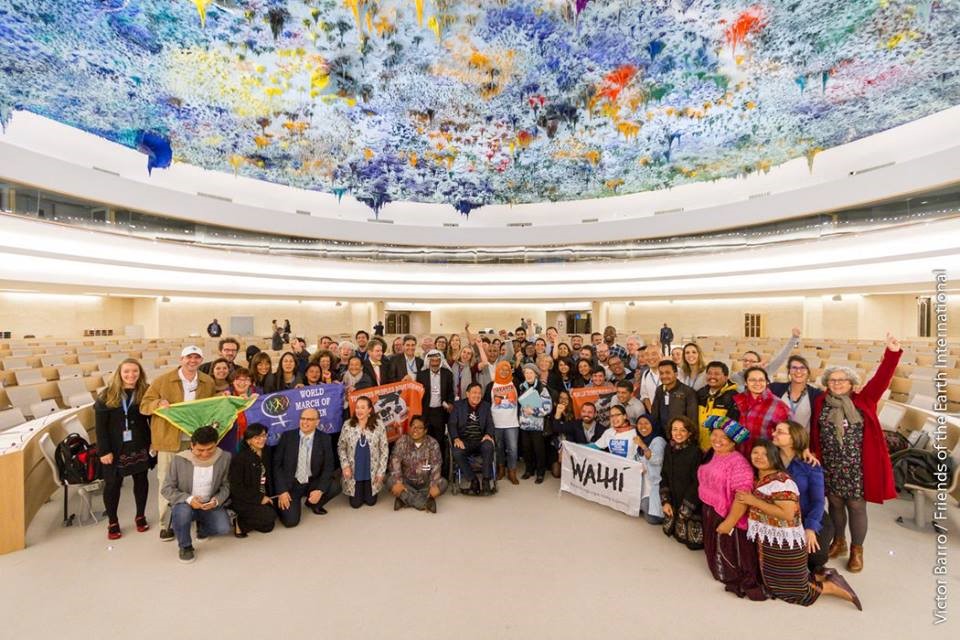 WHY IS THE GLOBAL CAMPAIGN MOBILIZED TOWARDS A UN BINDING TREATY FOR TRANSNATIONAL CORPORATIONS ON HUMAN RIGHTS?

The need to confront the Architecture of Impunity

Between transnational corporations, states and peoples, there is an undeniable asymmetry:

• On one hand: with the complicity of states that are in that are interested in guaranteeing that they are “attracting investment”, transnational corporations have been covering themselves with a solid armour made up of free trade and investment protection agreements and their respective sanctioning mechanisms. Institutions such as the International Centre for Settlement of Investment Disputes (ICSID) constitute clear examples of the privatisation of justice, as well as any ISDS mechanism.

• On the other hand, violations of human rights and the rights of peoples and nature have become inherent to transnational corporations operations, as well as systematic. But at the international level there is no binding rule for corporations on Human Rights.

In June 2014, the Human Rights Council finally adopted the resolution 26/9 on the elaboration of an International legally binding instrument on transnational corporations (TNCs) and other business enterprises with respect to human rights.

This was a historic achievement after decades of discussions and failed attempts within the United Nations. Such a legally binding Instrument is essential for two dimensions of the Global Campaign’s work: to end corporate impunity, and address the systemic power of transnational corporations which has reached unprecedented impacts on the daily lives of affected communities.

In 2015 the Global Campaign was present during the First Meeting of the OEIGWG. Our members prepared several activities in order to pressure governments to keep the process of building a Transnational Corporations Treaty moving forward. We submitted the “8 points: Written Contribution of the Global Campaign to the first session of the IGWG”

In 2016, the Global Campaign again participated actively in the debate at the Second Session of the OEIGWG and facilitated the participation of more than 100 activists, representing unions, peasant organizations, environmental organisations, youth, women, indigenous peoples, migrants and the access to medicines movements. They convened in Geneva to participate in and observe the proceedings within the UN. These activists represented 29 countries and shared their lived experiences in 15 activities both within and outside the formal spaces of the UN. Participants made 40 oral statements in the six panels of the session. We presented 6 concrete proposals for the binding instrument: on the obligations for TNCs, extraterritorial obligations; the instrument of enforcement, the responsibility of TNCs in the global supply chains; the architecture of the global corporate law (International Financial Institutions, the World Trade Organisation and the investment and trade regime); as well as the rights of the affected communities.

In 2017 the Global Campaign will continue to develop strategies and efforts in order to build a UN Binding Treaty on Human Rights and Transnational Corporations that contributes to stop impunity.

8 points: Written Contribution of the Global Campaign to the first session of the OEIGWG (2015)

UN information on the Second Session of OEIGWG

UN information on the Mandate of the OEIGWG

The Real News on the Binding Treaty (including Susan George intervention at the UN in October 2017).