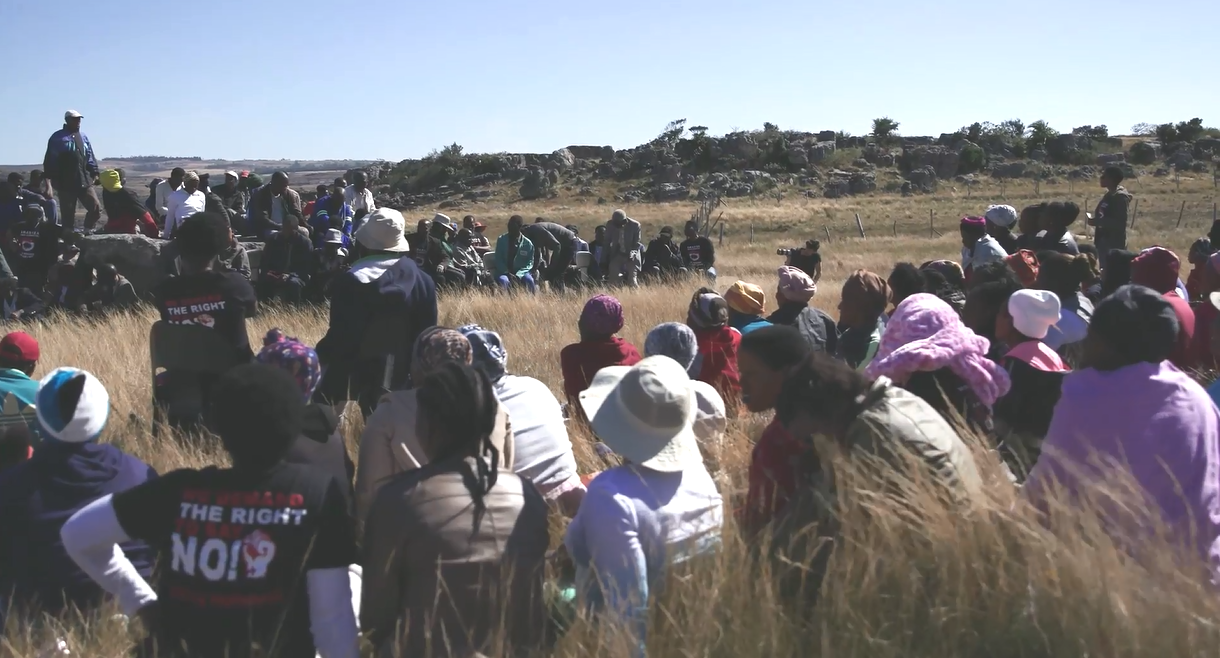 On Monday 6 August, 200 members of the Amadiba Crisis Committee gathered to General Meeting on a mountain in Xolobeni.

The meeting demanded that Mining Minister Gwede Mantashe visits the community within 21 days from 3 August. On 3 August Mr Mantashe published an “intention to declare” a another two year mining moratorium in Xolobeni. He gave the public 21 days to comment.

The present moratorium of Mr Zwane expires in December. Mantashe’s moratorium would also concern new applications for open cast mining on a 22km stretch on the Wild Coast, as well as DMR’s decision on the application made by Transworld Energy & Minerals” (TEM) in 2015. TEM is a subsidiary of the Australian mining company MRC, which has been behind the “Xolobeni Mining Project” since the end of 1990s.

Speakers at the Xolobeni meeting said that Minister Mantashe has never visited the community, not even as a GS of ANC. “What conflict is he talking about? He has not sent anyone here to ask us since he became a Minister. He has no ground for a new moratorium or for speaking about the conflict.”

“This is a stronghold of ANC. People love the ANC, but there are ANC leaders who hate the people of Xolobeni, because they cannot take our land.”

“All Mining Ministers: Buyelwa Sonjica, Susan Shabangu, Msebenzi Zwane have promised our land to the Australians and their black capitalist partners. Gwede himself now gives more time for the mining lobby to push their agenda”.

“They refuse to accept our NO to mining. They must not pretend that they are concerned about violence. They like it. They were supposed to take a decision long time ago.”

Since the end of a April court hearing, the community is waiting for a the Pretoria High Court judgement. 126 heads of households and leaders in Xolobeni ask that the Court to declare that they have a Right to Say No to mining

According to Government Gazette, Mr Mantashe took his decision on 15 June. In July he visited Mbizana Local Municipality. In May the Mbizana Mayor again put “titanium mining” in the Draft 2017-2020 Integrated Development Plan.