Yesterday, (11 September 2016)  in Robertson was an occasion of note. Unlike many other unions, the Csaawu 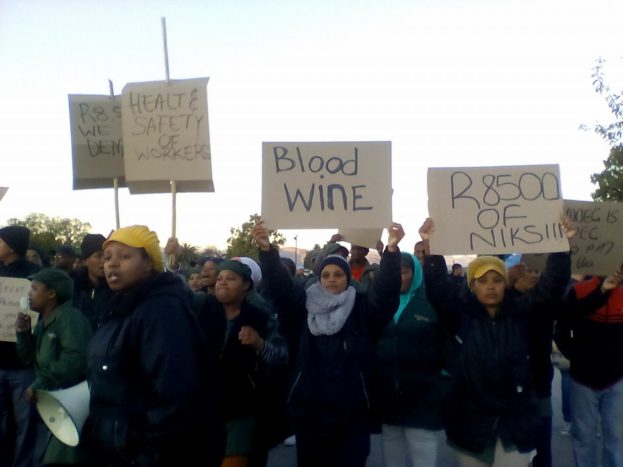 leadership was at pains to mobilise workers not to compromise on their demands. There were calls for unity in action. They asked striking workers to encourage one another and not to give up. To talk to the weaker ones and to give them strength. They explained the long road for the workers to walk to be victorious, but victory is certain. They must keep the legacy of the Marikana workers in their minds all the time. There is no turning back. Asijiki! A defeat of this strike will set workers back for about 10 years and the bosses will launch a counter attack. They asked them to involve their children and families in the strike. Explaining to them that the strike is about achieving a better life for Robertson Wine workers and their families but also to show others that a living wage is possible.

The United front explained that this strike is not only an economic strike for wages and better working conditions. This strike is also challenging the apartheid wage policy of Verwoerd. The policy that black workers must just get enough education to work in their kitchen. This low wage policy has been extended by the proponents of the “ democratic state”. The strike also challenge inequality in our society. South Africa is one of the most unequal societies in the world. All of this will not change unless workers stand up and fight.

The moral of the works are strong. They are determined to win. More workers are joining the strike. They marched in their areas to send a message to the scabs; “don’t take our jobs”. They showed their strength and their unity throughout the strike. The call is for other workers to support them. We call on communities to deal with the scabs. Let us mobilise towards secondary strikes. Let us march on 24 September to Robertson Wine. Unity is power!