The murder of Marielle Franco, an Afro-Brazilian queer socialist womxn on the 14th of March, has caused an international uproar and is yet another example of the so-called shrinking space for dissent. This shrinking space describes the heightened restrictions in the form of increased securitization, repression and intimidation imposed on social justice activists and communities in struggle. It is visible in the 34% increase in attacks against human rights activists from 2016 to 2017 recorded by the Business and Human Rights Resource Center: there were 388 attacks recorded in 2017 compared with 290 the previous year. These include 120 alleged murders and many other threats, assaults or intimidation attacks. The victims were unionists, protesters, whistleblowers and indigenous peoples, which are all united by the fact that they are fighting against corporate exploitation. And we should keep in mind that the recorded numbers of attacks are probably only the tip of the iceberg – how many incidences must have happened without the media covering it?

Those various forms of repression cannot just be dismissed as a “Third World problem”. Whilst Western countries may be quick to condemn the repressive tactics of authoritarian governments or leaders of developing countries which openly suppress freedom of expression, the West hypocritically ignores its own repressive tactics when housing the headquarters of transnational corporations which limit the freedom of those living in the Global South. The “liberal democracies” of the Western world are therefore major players when it comes to ensuring their own economic benefits. By using their economic power, they are able to shut down any space for dissent against their oppressive and harmful actions that exploit poor people in the developing world.

Marielle Franco: The murder of a symbol for emancipation

One of these direct attacks on freedom of speech took place on the 14th of March 2018 against Marielle Franco in Brazil. Grown up in the Maré favela, a notoriously dangerous and poor squatter community in Rio de Janeiro, she was a member of the Socialism and Freedom Party (PSOL) and became city councilwomxn as the only Black womxn on the 51-person council. Her most recent work focused on condemning the police brutality in favelas in Rio de Janeiro, often referred to as “Black genocide”: In 2016 alone, more than 4,200 people died in Brazil at the hands of police, representing an increase of 26% from the previous year. Marielle Franco’s vocal criticism of the police, coupled with the fact that the deadly bullets found inside her were property of the Brazilian federal police, leads many to believe it was state murder. 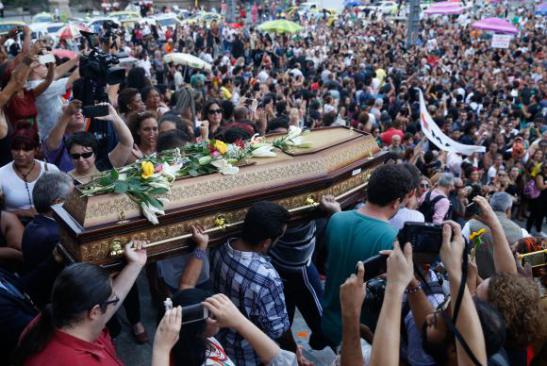 During the subsequent days, tens of thousands turned out across Brazil to protest her murder whilst demonstrations and gatherings in her honour were also held in New York City, Paris and Buenos Aires. On social media, hundreds of thousands have pledged their commitment to remember her murder using the hashtag #MarielleFrancoPresente. Marielle’s tragic death touches, affects and brings together such a wide range of people for a simple reason: Her personality does not only represent conviction in the fight against police brutality, but also stands for resistance against various systems of oppression that so many people experience on a daily basis: white supremacy, patriarchy, cis-heteronormativity and capitalism.

And like Marielle, we cannot forget any of the many activists that have lost their lives defending human rights across the world. We have to remember the Maltese whistleblower Daphne Caruana Galizia, who was assassinated on the 16th of October 2017 for her courageous publications about the corruption of Maltese politicians and business elite. We cannot forget Jan Kuciak, the 27-year-old Slovak investigative reporter, who reported tax evasion among Slovak elites and was found dead alongside his girlfriend in his apartment on the 25th of February 2018. We stand with Jo Cox, British Labour Party Member of Parliament, who was shot and stabbed to death on the 16th of June 2016 for standing up for immigrants’ rights in the UK. We will remember the South African lesbian LGBTQIA+ rights activist and member of the Ekurhuleni Pride Organising Committee Noxolo Nogwaza, who was subjected to “corrective rape” and subsequently stabbed to death on the 24th of April 2011. The memory of Eric Lembembe, the Cameroonian gay rights activist and journalist, who was assassinated on the 15th of July 2013, will remain in our hearts. We refuse to forget Sikhosiphi (Bazooka) Rhadebe, the Chairperson of the Amadiba Crisis Committee fighting against mining companies in Xolobeni in the Eastern Cape, who was gunned down at his home on the 22nd of March 2016.

These are just a handful of the freedom fighters who have been murdered for fighting against oppressive systems. Violent attacks against human rights defenders – particularly those fighting the capitalist system and transnational corporations – are clearly on the rise, and such a trend cannot be ignored. But instead of merely describing the trend, we should also try to understand what is causing it. Can we see the increased power shift towards the global concentration of capital as a driving force behind the ‘shrinking space for dissent’? In what way is the shift to the right of mainstream politics in the Western world connected to the trend of ‘shrinking space’, like the rise of fascism in much of Europe and the US for instance? Is it due to the nature of power itself, which would always meet increased pressure from below with repressive means? Does the trend correlate with the increase in populism that seeks to limit freedom of speech?

In the end, it is probably a combination of all these elements that contribute to this ‘shrinking space’ we have been witnessing, and we must continue exposing the repressions in their various forms. It is only at this price we will be able to continue our common fight against global capital and its oppressive structures of power. A luta continua!