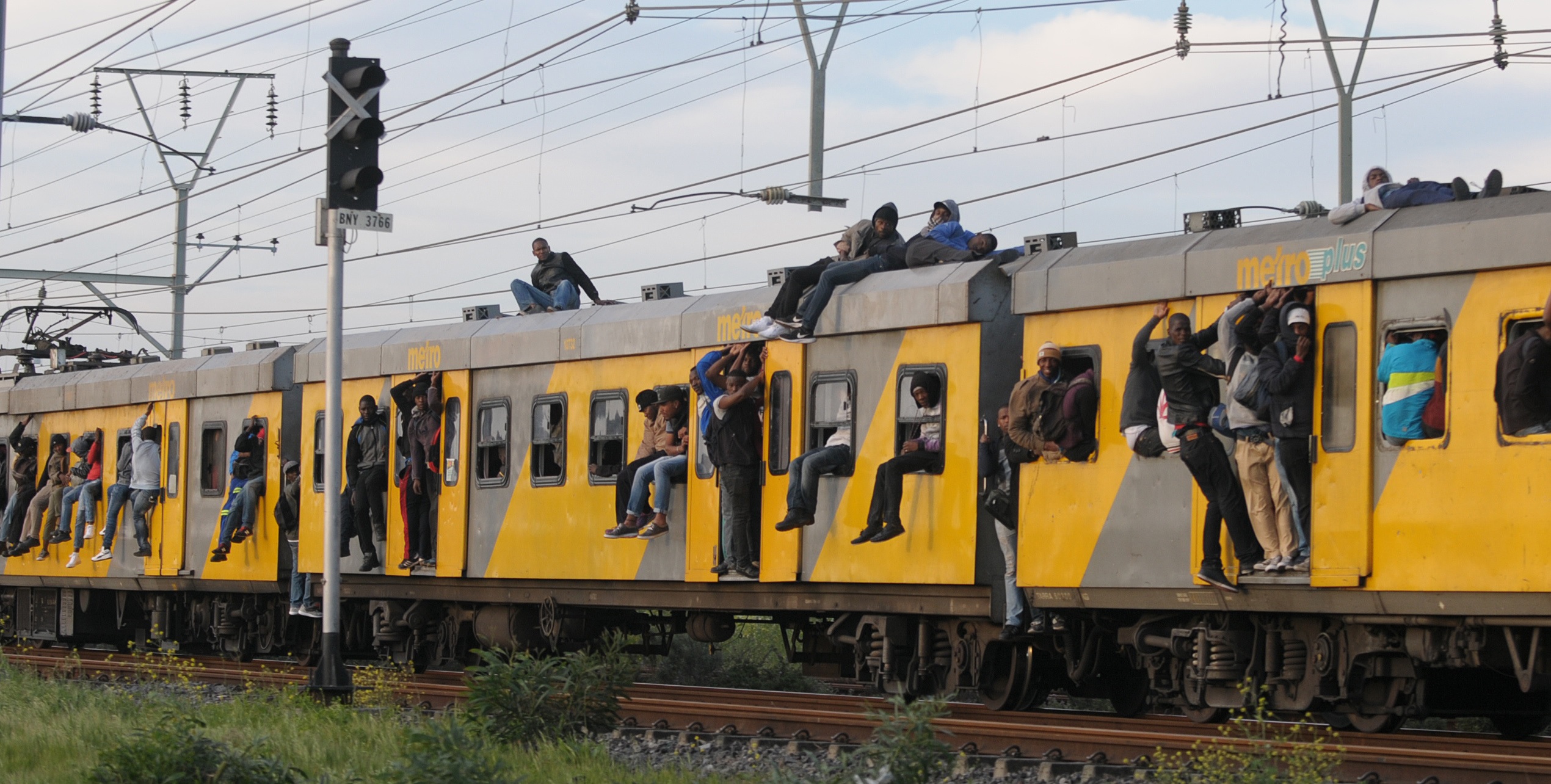 On 6 April 2017, activists from various peoples’ movements and NGOs came together to organise the Cape Town Memorial for Ahmed Kathrada. The event came just days after then President Jacob Zuma had summarily dismissed Pravin Gordhan and Mcebisi Jonas from the National Treasury. The moment marked the height of the crisis of state capture, where Gordhan was the last obstacle to securing the infamous nuclear deal.

The memorial was notable for the landmark speeches delivered by Gordhan himself, calling on South Africans to “connect the dots”, and then SACP Deputy Secretary General, Jeremy Cronin, finally calling for Zuma to resign.

It was the other speeches however, that were the catalyst for a new campaign against state capture. These refocused on the now obvious corruption of Zuma’s network and explained the devastating effect it was having on the poor and working-class of our society. Activists spoke of how their individual and collective struggles could not be won under Zuma.

Crucially, there was also no illusion that the problem began and ended with Zuma. His network was not the only problem. But building a just and equal society could not begin until that network was removed. This deviated from the narrow demonstrations held under the banner of “ZumaMustFall”. These were overwhelmingly led by the upper classes and elites and were easily dismissed by Zuma and his forces as reactionary agents of white monopoly capital who were holding back Zuma’s project of “Radical Economic Transformation”.

#UniteBehind was launched on 28 April in Khayelitsha. The founding organisations included, amongst others: Equal Education, Sonke Gender Justice, the Social Justice Coalition, the Treatment Action Campaign and Right to Know (Western Cape). They were later joined by Reclaim the City, Alternative Information Development Centre (AIDC), the UDF Veterans and the Trust for Community Outreach and Education (TCOE).

The immediate and urgent task for #UniteBehind was to rapidly organise mass action against state capture in response to the upcoming vote of no confidence in then President Zuma. But #UniteBehind members were, from the beginning, adamant that our work should be a long-term project that was not only concerned with the Zuma network and state capture. #UniteBehind’s mission was one of unifying struggles and campaigns to empower the single issue mandates of many organisations.

The day before the vote, #UniteBehind mobilised thousands of people who marched on Parliament in support of the motion. Whilst the motion was unsuccessful, the public rift in the ANC was apparent. More crucially, #UniteBehind had begun to establish itself in the public imagination as an anti-corruption and anti-racism coalition that was led by the working class and the poor. 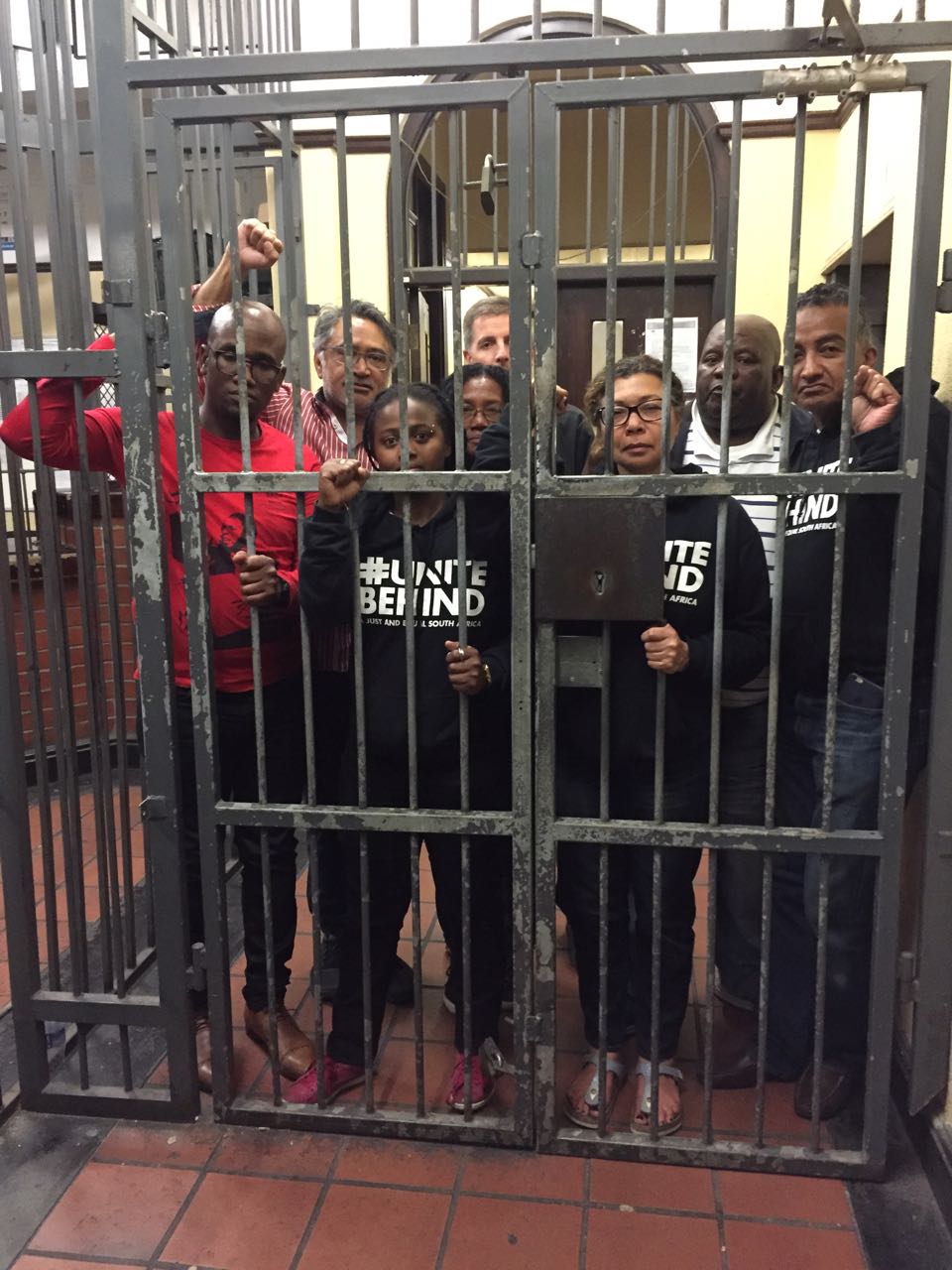 After our march, #UniteBehind focused its attention on the crisis at Metrorail and the capture of Prasa. The service provided by Metrorail, known by commuters as “Metrofail”, was and remains on the verge of collapse. Commuter rail is the only affordable means of public transport for the majority of people in Cape Town, where spatial apartheid has left a legacy of long and expensive commutes for its African and Coloured residents. Only a decade ago there used to be over 620,000 daily rail commuters. This number has now dropped below 400,000.

The systemic delays, cancellations and subsequent overcrowding subject working people to daily experiences of uncertainty and violence. Workers are routinely late for work, face reduced pay and leave, and are often fired. What little time they have left in their days are spent waiting for trains that never come or when they do, are simply too full to board, even if they are brave enough to climb on the roof. In addition, women passengers are routinely harassed and assaulted and others are robbed and too frequently murdered.

The 2010 Football World Cup meant that billions of rands were allocated to Prasa for overdue recapitalisation. Over the next eight years, an astounding network of corruption, headed by former CEO Lucky Montana, pillaged the agency. There was the infamous purchase of locomotives from Spain that could not fit South African tracks, amounting to over R5 billion of public money. Another R5 billion contract for access management systems, CCTV cameras and control rooms was never delivered. At the centre of the deal was Roy Moodley, a close friend and associate of Jacob Zuma. Moreover, Mcebisi Jonas was replaced, and Zuma appointed Sifiso Buthelezi, the Chairperson of the Prasa Board during these deals, as the Deputy Finance Minister. All forms of oversight had been destroyed. The “radical economic transformation” faction had deliberately crippled commuter rail, delivering billions of rands worth of profit to multinationals and thieves.

#UniteBehind’s #FixOurTrains campaign has led the fight against this parasitic network. The campaign is committed to building a safe, reliable, affordable, efficient and quality public rail service, and activists have begun by employing a range of tactics:

• Meetings of corrupt executives have been publicly interrupted, whilst eight activists were arrested when they occupied the offices of the National Prosecuting Authority demanding the arrest of Zuma.

• #UniteBehind and its affiliate organisations host regular activist forums where members and commuters come together to discuss politics and plan their actions. These are hosted in informal settlements, townships, occupied buildings and the Cape Town Station concourse.

• Pamphleteering teams go out on the trains every week, whilst others focus on building commuter action committees.

• Beyond pamphleteering and mobilising, these committees are embarking on safety initiatives to walk people safely to and from the stations. #UniteBehind is adamant in its demand to Prasa that it creates commuter oversight and accountability forums. These committees could be a start of such forums and the spine of the genuinely commuter-owned service.

• In the courts #UniteBehind has managed to interdict the payment of millions of rands to corrupt companies and forced the resignation of a previous corrupt board. The galleries of the previously silent and ineffectual Portfolio Committee for Transport were flooded with activists and commuters when #UniteBehind delivered its damning submission on the state of Prasa. The committee has now announced an inquiry that is due to start in August.

One of the most pressing concerns for #UniteBehind is the increasing divisions and racism between African and Coloured communities. The eruption of violence in Siqalo was a brutal reminder of this. The #FixOurTrains campaign has provided an opportunity to tackle such animosity, presenting a shared area of struggle. This racial divide remains the greatest challenge for organising in the Western Cape, where the ruling Democratic Alliance (DA) continues to hold a monopoly on the coloured vote. Dislodging the DA’s power will require building an inclusive political vision of shared struggle that reveals the failure of ANC and DA for both African and Coloured people. Thus, it was extremely inspiring to observe the recent successful congress of Reclaim the City, a diverse and militant mass movement of tenants and occupiers in the inner city calling for “Land for People, not Profit”.

Most of #UniteBehind’s base organisations are restricted to traditionally African areas and so we are proud of the collective that has formed in Elsie’s River. The members of this collective have been at the heart of protest actions alongside their African comrades. Our activist forums reveal shared daily realities and common identities are being forged, often around the total lack of safety and systemic violence in communities. The leaders of the Elsie’s collective, mostly young people just out of school, have organised an after-school literacy programme. A women’s and youth group meet every week and the activists have moved into the nearby Malawi Camp informal settlement, adamant that they leave nobody behind. They aim to build a “working-class culture”, with an objective of giving every child a meal and story before they go to bed. Using traditional methods of organising and experimenting with new ones, the collective is revealing a blueprint for other areas to follow.

At its inaugural congress, #UniteBehind will adopt a constitution and debate its proposed structures. How the organisation structures itself will be crucial. If we are to truly grow we must include and empower collectives like Elsie’s River alongside our more established organisations.

The congress will raise and hopefully begin tackling difficult political questions faced by all progressive social movements. With deepening crises of unemployment, poverty, gender-based violence and repression, an alternative that offers a credible vision and way of organising can no longer wait. What role #UniteBehind will play will be up to the delegates that attend, but some within the coalition believe that the organisation could being to engage local election processes. #UniteBehind could provide the platform that builds genuine and tangible solidarity and support for organisations and movements to put forward their own local candidates, candidates that are accountable to their constituencies and united by a common programme for justice and equality.

Bruce Baigrie is a member of the #UniteBehind Organising Secretariat.

Posted in Partners Tagged with: #UniteBehind