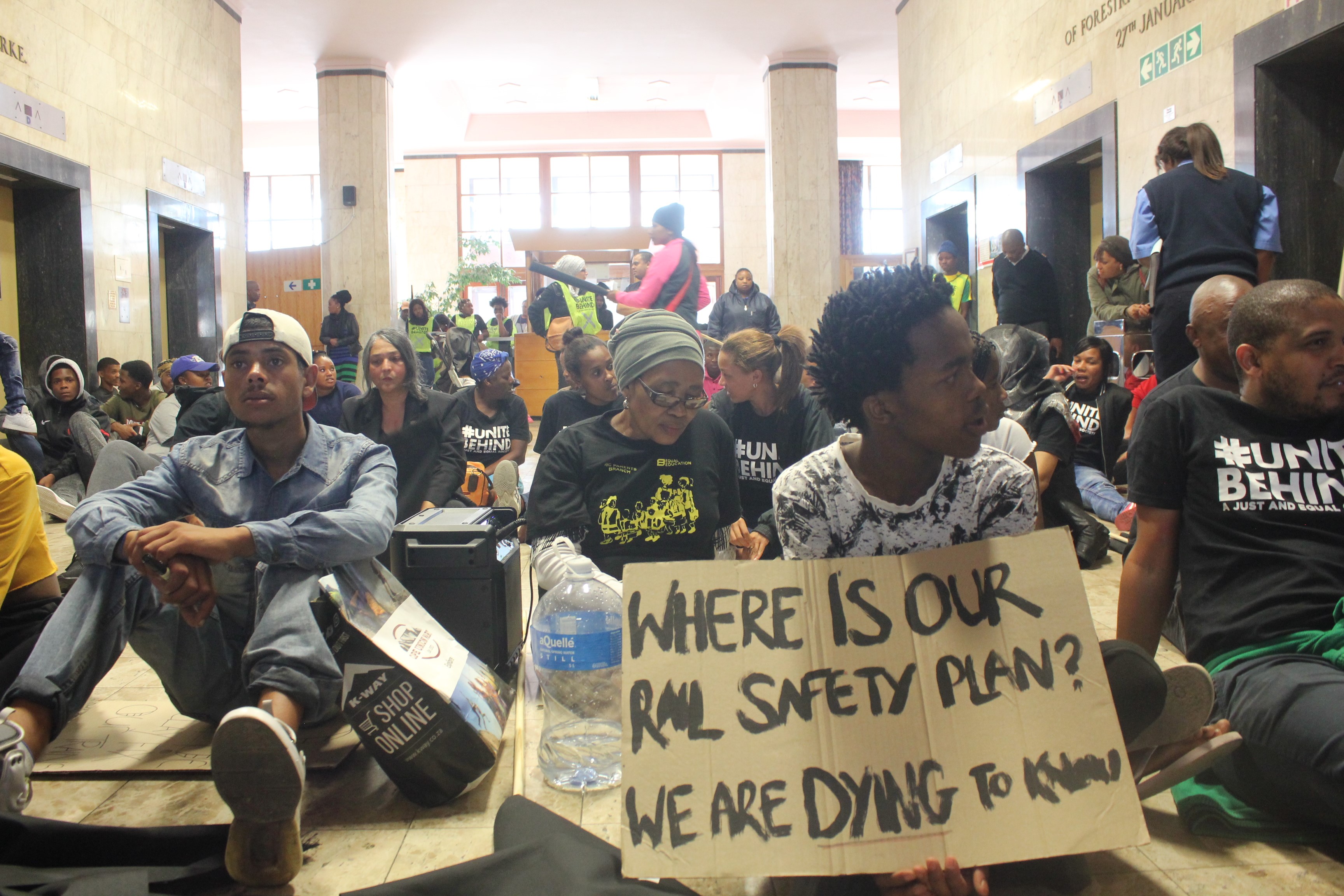 Today, Wednesday 17 April 2019, the #UniteBehind coalition are occupying the offices of the Passenger Rail Agency of South Africa in Cape Town.

120 people from Elsies River, Khayelitsha, Salt River, Woodstock, Gugulethu, Cape Town, Kraaifontein and Kenilworth among others are standing shoulder to shoulder to demand freedom, safety, equality and respect for our rights to education, work and family life.

Death, sexual violence, delays, line shutdowns, mismanagement, train crashes, fear, anxiety and pain is the daily lot of the working-class across our country.

We refuse to accept this injustice any longer.

The ANC is the party of the majority of our people and it has the power to #FixOurTrains.

Ten #UniteBehind activists will also occupy the offices of the Western Cape ANC to receive a reply to the letter we sent to our President Cyril Ramaphosa.

We do this because Minister of Transport Blade Nzimande cannot do his job instead, he has demonstrated cronyism and nepotism which is unlawful.

We demand that the Minister appoint a permanent board at PRASA within six weeks, and to appoint a commuter representative to this board.

The current board has been interim since last year, and has been temporarily extended for six months. We desperately need stable and ethical leadership if we are to #FixOurTrains.

We are also calling on President Cyril Ramaphosa to fulfil his commitment of meeting with commuters in Cape Town. After his misguided electioneering stunt in Cape Town last week at the launch of two new trains, we peacefully blockaded his motorcade to demand to be heard.

We had questions on the corruption and looting that has taken place at PRASA and the R24 billion that has been stolen from PRASA over the last decade. We also asked for our commuter-centred safety plan. We also asked if he will still care about the trains after election day on May 8.

There are things the African National Congress (ANC) can do before the election to help stabilise the commuter rail crisis. Do not use the pain of working class people who rely on the train service on your campaign.

#Justice4Simo and all the others who have lost their lives on the trains.

On 26 April 2019, we will commence a hunger-strike to #FixOurTrains and to mark 25 years of freedom.

#UniteBehind is a coalition of people’s movements joined by legal, policy and research organisations working for a just and equal society where the people share in the country’s wealth and our environment is protected for future generations.

President Ramaphosa knows that the commuter rail system is a disaster that affects millions of people directly and indirectly because of state capture, mismanagement, corruption, nepotism and monumental incompetence at the Passenger Rail Agency of South Africa and the Ministry of Transport. Instead of declaring a disaster or even send a courteous acknowledgment to several memoranda and letters sent by #UniteBehind to President Ramaphosa, he accepted misguided electioneering advice to launch two new trains in Cape Town.

To show our discontent #UniteBehind activists gathered and were forced to resist injustice towards commuters at the PRASA and ANC offices in Cape Town. We want you to hear our concerns about the commuter rail service. We have written to you several times before without reply or acknowledgment.

We need to ask you questions we need to talk about how to #FixOurTrains. We have great respect for you and your office. Our research and activism against state capture has given us some understanding of the Herculean tasks that lie ahead.

Here are ten of our many questions for President Ramaphosa:

We will not be silent until we hear from the President. We demand timelines and plans that we can hold to account.

Mr President, please do not let your ANC election machine use the suffering of commuters as an election ploy. We lose our jobs, possessions, lives because of the crisis on our rails.