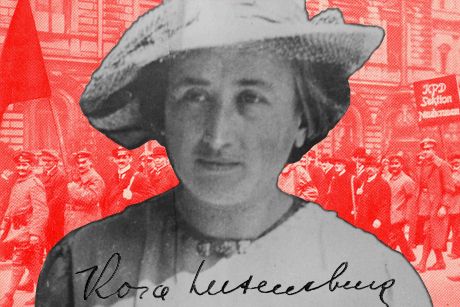 To commemorate the 100th anniversary of the murder of one of the most inspiring revolutionaries of the Socialist movement, Rosa Luxemburg, we share with you Michael Löwy’s appreciation of her contribution to our understanding of the revolutionary process and the fight for socialism.

In his presentation of Marx’s Theses on Feuerbach (1845), which he published posthumously in 1888, Engels described them as “the first document in which is deposited the brilliant germ of the new world outlook”. Indeed, in this little text Marx surpasses dialectically – the celebrated Aufhebung: negation/conservation/elevation – the preceding materialism and idealism, and formulates a new theory, which we could describe as the philosophy of praxis. While the French materialists of the eighteenth century insisted on the need to change material circumstances so that human beings could change, the German idealists affirmed that, thanks to the formation of a new consciousness of individuals, society would be changed.

Against these two unilateral perceptions, which both led to a dead end – and the search for a “Great Teacher” or Supreme Saviour – Marx affirms in Thesis III: “The coincidence of the changing of circumstances and of human activity or self-change [Selbstveränderung] can be conceived and rationally understood only as revolutionary practice.” [1]. In other words: in revolutionary practice, in collective emancipatory action, the historical subject – the oppressed classes – transforms simultaneously both material circumstances and its own consciousness.

Marx returns to these problems in The German Ideology (1846), writing the following: “this revolution is necessary, therefore, not only because the ruling class cannot be overthrown in any other way, but also because the class overthrowing it can only in a revolution succeed in ridding itself of all the muck of ages and become fitted to found society anew.” [2]

That means that revolutionary self-emancipation is the only possible form of liberation: it is only by their own praxis, by their experience in action, that the oppressed classes can change their consciousness, at the same time as they subvert the power of capital. It is true that in later texts – for example, the celebrated 1857 Preface to the Critique of Political Economy – we find a much more deterministic version, which regards the revolution as the inevitable result of the contradiction between the forces and relations of production; however, as his principal political writings attest, the principle of the self-emancipation of the workers continued to inspire his thought and his action.

It was Antonio Gramsci, in his Prison Notebooks in the 1930s, who used, for the first time, the expression “philosophy of praxis” to refer to Marxism. Some people claim that it was simply a trick to mislead his fascist jailers, who might be wary of any reference to Marx; but that does not explain why Gramsci chose this formula, and not another, such as “rational dialectic” or “critical philosophy”. In fact, with this expression he defines, in a precise and coherent way, what distinguishes Marxism as a specific world view, and dissociates himself, in a radical fashion, from positivist and evolutionist readings of historical materialism.

Few Marxists of the twentieth century were closer to the spirit of this Marxist philosophy of praxis as Rosa Luxemburg. Admittedly, she did not write philosophical texts, and did not work out systematic theories; as Isabel Loureiro correctly observes, “her ideas, dispersed in newspaper articles, pamphlets, speeches, letters (…) are much more immediate answers to the conjuncture than a logical and internally coherent theorisation”. [3] Nevertheless: the Marxian philosophy of praxis, which she interprets in an original and creative way, is the dominant current – in the electric sense of the word – of her work and her action as a revolutionary. But her thought is far from being static: it is reflexion in movement, which enriches itself with historical experience. We will try to reconstitute the evolution of her thought through some examples.

It is true that her writings are traversed by a tension between historical determinism – the inevitability of the collapse of capitalism – and the voluntarism of emancipatory action. That applies in particular to her early works (before 1914). Reform or Revolution (1899), the book thanks to which she became known in the German and international workers’ movement, is an obvious example of this ambivalence. Against Bernstein, she proclaims that the evolution of capitalism necessarily leads towards the collapse (Zusammenbruch) of the system, and that this collapse is the historical road which leads to the realization of socialism. This amounts, in the final analysis, to a socialist variant of the ideology of inevitable progress which has dominated Western thought since the Enlightenment. What saves her argument from a fatalistic economism is the revolutionary pedagogy of action: “in the course of the long and stubborn struggles, the proletariat will acquire the degree of political maturity permitting it to obtain in time a definitive victory of the revolution.” [4]

Of course, recognizes Rosa Luxemburg, the class can be mistaken during this combat, but, in the final analysis, “Historically, the errors committed by a truly revolutionary movement are infinitely more fruitful than the infallibility of the cleverest Central Committee”. The self-emancipation of the oppressed implies the self-transformation of the revolutionary class through its practical experience; this, in its turn, produces not only consciousness – a traditional theme of Marxism – but also will: “The international movement of the proletariat toward its complete emancipation is a process peculiar in the following respect. For the first time in the history of civilization, the people are expressing their will consciously and in opposition to all ruling classes. (…).Now the mass can only acquire and strengthen this will in the course of day-to-day struggle against the existing social order – that is, within the limits of capitalist society.” [6]

One could compare the vision of Lenin with that of Rosa Luxemburg with the following image: for Vladimir Ilyich, editor of the newspaper Iskra, the revolutionary spark is brought by the organized political vanguard, from the outside towards the interior of the spontaneous struggles of the proletariat; for the Jewish/Polish revolutionary, the spark of consciousness and revolutionary will ignites in the struggle, in the action of masses. It is true that her conception of the party as organic expression of the class corresponds more to the situation in Germany than to Russia or Poland, where already the question of the diversity of parties defining themselves as socialist was posed.