Million Climate Jobs Monthly Meetings have been taking place at AIDC´s premises since 2012. The main items at its most recent meeting on 27th October 2016, were food security and small scale farming. It was well attended by approximately 30 participants.

The first guest speaker, Emeritus Professor David Sanders, has more than 3 decades experience in public health and primary healthcare in Southern Africa. Between 1993 – 2009, he was head of the School of Public Health, at the University of the Western Cape (UWC). He dealt with three major questions:

1. What is food security?

Food security means, that all people at all times have physical and economic access to sufficient, safe and nutritious food to meet their dietary needs and food preferences for an active and healthy life.

2. Why is food security important for health?

To understand South Africa´s food security related health issues, both eating enough and eating healthy food has to be considered.

In 2012, 26,5% of the children aged 1 to 3 years were stunted, due to long term insufficient food. Undernourished kids are not only too short for their age, but at high risk of several diseases such as diarrhea, pneumonia and insufficient brain development. Only 8% of infants younger than 6 months are breastfed. This, the lowest rate in the world, has serious physical and psychological consequences. 60% of children live in households officially recognised as being poor. 26% of the total population report experiencing hunger.

Obesity has reached epidemic levels. 19,7% of the South Africans live on too much sugar, 18,3% subsist on too much fat. This unhealthy diet does not only lead to weight problems but increases the risk of diabetes and high blood pressure, too. In fact, the rate of diabetics within South Africa’s total population has, depending on the considered age group, doubled to tripled since 1990. Within the population obesity often is not considered to be a problem. Being obese is a sign of being well off, whereas losing weight makes you suspicious of suffering from severe illnesses.

3. What makes us food-insecure?

The main reason for food insecurity is poverty. Price is the main determinant when shopping for food. Even those who are not poor are likely to buy junk food, as healthy food is 10% to 60% more expensive. Likewise cooking fresh food consumes more fuel than just heating processed food. Profit-driven supermarkets perpetuate bad eating habits: hence the much greater availability of processed foods in township shops than in wealthier suburbs.

Many processed products include plenty of hidden sugar and fat. Still, they are very popular, as they are convenient to prepare and can be kept easily even without a fridge. The people often are not aware of the hidden calories. Processed products are pushed to our market by large multinational corporations such as Nestle or Coca Cola Company, who want to enter Africa as a new market and therefore invest high sums in advertising. Because of the neoliberalism embedded in trade agreements, South Africa cannot restrict the importation of unhealthy goods.

Especially the last point makes food security a climate change issue, as commercial food production by multinational corporationsgoes ahead with a much larger carbon footprint than small scale production and distribution. 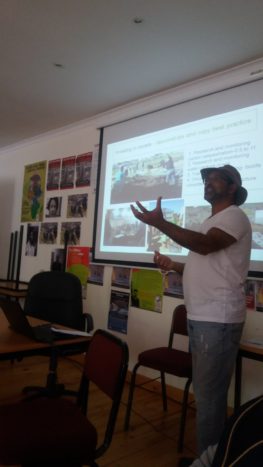 This was a good crossover to the day´s second speaker Nazeer Sonday, who is a farmer at Philippi Horticultural Area and a leading figure in the PHA food and farming campaign. The PHA food & farming campaign´s main objectives are:

The Philippi Horticultural Area has been used for farming for 130 years. With up to 6000 employees it is a big employer onthe Cape Flats. The number of workers even could be incrased to 9000 workers. It supplies Cape Town with 150000 tons of vegetables, herbs and flowers a year and 2000 livestock a week. What makes farming so productive in the Philippi Horticultural Area is the good soil and water supply because of a natural underground aquifer.

Unfortunately, the governmental is now under pressure from housing developers and miningcompanies eager to exploit the quartzite in the sand. If agreed, these changes would not only endanger the horticultural use, but additionally degrade the natural aquifer.

At the moment the Philippi Horticultural Area is mainly farmed by established, commercial farmers that cover 1500ha; approximately 200ha are farmed by new farmers. Nazeer could tell from his own experiences in becoming a farmer, that small-scale farming on 2ha to 10ha farms cannot compete with the agricultural methods of established farmers, which are based on a high financial input for fertilizers, insecticides and technical equipment. Besides small scale farmers cannot live on the fruits of their work, as supermarkets, to which they sell their vegetables, capture profits, and the farmers cannot compensate with increased production, because they do not have the capacity.

According to Nazeer the disadvantages of commercial farming are

• It is based on exploitation of land and labor
• It contributes to climate change
• Intensive use of fertilizers and insecticides degrades water, soil and health
• Corporate control of food and farmers

Instead of strengthening this system, farmers, distributors and consumers should be put at the centre of food system by means of small scale farming.

One obstacle to reach this goal is the state being incapable of delivering on land reform. A large scale purchase of land is not achievable. Therefore the PHA food and farming campaign suggests targeting the land of retiring commercial farmers and making it accessible for small scale farmers. Rather than giving high grants to elite black farmers, the government should let more small scale farmers benefit. On an area of 1000ha there could be 500 farming families instead of 40 grant-hungry wannabe commercial farmers. The advantages are obvious: small scale farming creates jobs and uses natural resources more sustainably than industrial style farming.

The key point of farming is a good soil. On Nazeer´s Vegkorp farm, there is already made use of alternative fertilizing methods. Plants like peas and beans can accumulate nitrogen. Furthermore the soil is no longer ploughed. The decomposing roots add further nutrients to the soil. Compost is used as main fertilizer. These measures of soil cultivation can increase the amount of soil organic carbon by sequestrating athmospheric carbondioxide, having positive impact on both, food security and climate protection. By a smart crop sequence insecticides can be avoided as well. Another promising approach on vegetable distribution implemented at Vegkorp farm is selling them via WhatsApp. You can place your order in a chat and pick up your vegetables on a certain pick up point later on.

The best working methods often have to be found out by trial and error in long term processes. In order to help new small scale farmers to have a good start, Nazeer suggested the following measures:

1. COP 22: Update re Marrakech & Cape Town events. Thembeka to let Jeff have the details for circulation

3. Public Protector Complaints against the Departments of the Environment and Energy + related matters – Update – Richard Halsey (Project 90). No developments, other than a new person from the Public Protector is now involved and Richard’s commitment to keep following up

4. Report back from Organisations/Groups represented today. None

5. Research & other updates. Jeff reported that Lucia Winkler, an intern from Germany, was working on a short cartoon-type video promoting Rainwater Harvesting and climate jobs that might be available for previewing at thenext Climate jobs meeting.

Agreed that it would be on 24th November, with the main new item being an input by Robert Andrews on “Alternative backyard agriculture using waste water”