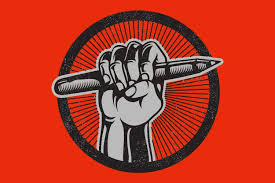 The much anticipated President’s Report on the Feasibility of Free Tertiary education was released. Fees have not fallen, even after three years of student protests under the banners #FeesMustFall and #OutsourcingMustFall. It’s been a week now since the report has been released, and even though most students have been writing exams some have had a moment to reflect on the over 700 pages long report. Here’s what some of them had to say:

“After running from the cops, we all gathered at Steve Biko. Tired and exhausted, we all sat on the floor passing around water to feed our thirst and to calm us down. It was a rough day. Twelve of our comrades were arrested of whom one was dragged and sent to the hospital; we were shutting down the institution since 4:30am and had to run from the cops and private security multiple times.

We felt defeated but not defeated enough to not sing. We sang shiwelele, which is one of those songs that hits the soul regardless of how you feel. Our melody was on Nina Simone’s level. Our pain could be felt from miles away and although singing was a struggle, we kept on pushing. I have never felt so connected with so many people.

“As a student I am disappointed that free education is not viable at this moment. This means that the #FeesMustFall in the last two years was disregarded.  I do like and respect they subjected registration fees be scrapped across the board. Regarding NSFAS (National Student Financial Aid Scheme); this is where the government needs to step up. There should be free education for the poor, a subsidy for the missing middle and dependable income.”

“The fees commission report is an insult to the students who have been protesting demanding Free Education. It is an insult because these students have made it clear that Free Education is possible in South Africa but however have been met with police brutality, exclusions and disciplinary action. All this violence from the universities and government, only to receive such a disrespectful report that doesn’t speak at all on the issues raised by students.

The new loan system discussed in the report needs to be rejected because its the exact same thing as NSFAS but in fancier words. The loan system leaves students from poor backgrounds with debt that they have to pay back for the rest of their lives. The report speaks nothing about financial exclusions which is what most students are facing. Because students who are from middle class families are not able to pay the full fees but can partially afford to pay, they are often in debt and therefore are financially excluded without completing their degree.

The report also doesn’t speak on erasing the NSFAS debt students have. This debt (just like any other debt) reduces your chances of progressing in life because not only do you need to look after your family, you also need to pay back thousands of rands. I accept the idea of having no registration fees being paid as registration fees is a burden on many students during the beginning of the year.

Most students don’t get into university because of registration fees. That’s the only thing that I can say will be beneficial for students in that report. As students we’ve received a smack in the face with that report and the only thing left to do now is to continue fighting. The struggle for free education is a genuine call that we won’t win sitting down in our classrooms. We need to take this fight to the government and not just our universities. This report has given us a reason to continue fighting.”

”The Fees Commission report was released a few weeks ago by the President after months of ‘reviewing’ and ‘engagement’ by the presidency and the cabinet. We were not surprised to learn that the report recommends Income Contingent Loans, basically handing us over to the banks so that we can drown in a pool of debt.

The commission reaffirmed our position that the state has reached a cul-de-sac; hence the lack of political willingness and commitment to concede on Free Education, not even for the ‘poor’. What we always get from these commissions is long reports with very little solutions, we are not getting value for money. We can already see what the banks are doing on student loans in the United States, the UK and elsewhere, we therefore cannot comprehend the logic of subjecting students to the same banking vampires; particularly given our history and current context when we seek to undo inequalities, unemployment and poverty instead of trapping mostly ‘first-ins’ from the rural and working-class areas in a spiral of debt. The FeesMustFall movement is also bleeding, but we were happy to see a new injection of first years into the movement, the challenges that are ahead of us are great but not impossible. The movement at UCT has already resolved to spend more time on movement building by strengthening ourselves internally and reaching out to organizations outside the university and internationally. The direction of the campaign is heading towards challenging the state and the political economy of our country, we have a very small number of filthy rich people in this country who seem to be asleep and oblivious to the challenges that are facing the majority, it is high time that we wake them up.”

Read more on the feasibility of free-fee education and the failure to consider radical solutions here.