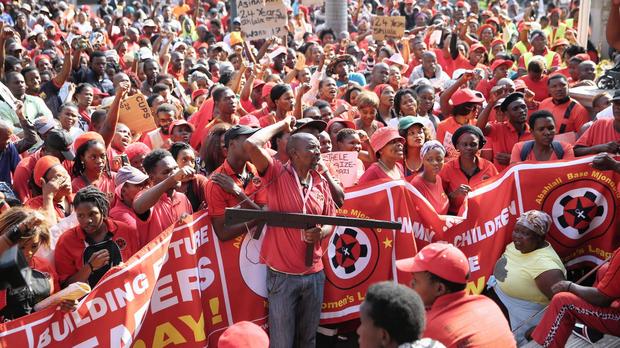 Abahlali baseMjondolo is a democratic movement of impoverished people with members in five provinces. The movement was formed in 2005, after a blockade of one the busiest roads accessing the city. The protest came about as a result of the failure of the municipality to keep its promise that it would build houses on a nearby piece of land. The land in question was then sold to a local businessman.

Since then we have grown, in April this year our audit of our membership in KwaZulu-Natal passed 50 000 people. Our movement represents the residents of more than 40 new land occupations in the province of KwaZulu Natal. In total the movement has 47 branches in five provinces countrywide.

Our first press statement issued when we were formed in 2005 declared a clear commitment to the expropriation of land. Despite repeated waves of severe state repression, sometimes supported by some NGOs and academics, our movement has grown into a powerful force in Durban, and is rapidly growing elsewhere. We have mobilised under the banner of ‘Land, Housing & Dignity’ and are a movement that considers itself to be on the left, committed to building popular democratic power from below.

In the past five months our movement has lost seven leaders to assassination. We have also lost members to violent repression from the police, anti land invasions units and municipal security. In our view it is clear that we, as impoverished black people, do not live in a democracy. We are ruled by the gun and the politics of blood. In June 2017 we lost a young activist, Samuel Hloele who was shot at by the municipality’s Anti Land Invasion Unit. Also in the same year we lost a two week old baby Jaden Khoza who inhaled smoke from teargas which was thrown by police at the Foreman Road Settlement. In the same year our chairperson in Sisonke village Sibonelo Mpeku was kidnapped and killed by unknown men. Soyiso Nkqayi a branch Youth League organiser was also brutally killed in the eNkanini land occupation. Sandile Biyela from the Solomon Mhlangu branch died while running away from the armed metro police, he was electrified. In the eKhukhanyeni land occupation we have Sifiso Ngcobo a chairperson of the branch who was shot at by unknown men.

This is not new, in the past we have lost comrades in the struggle for decent land including Nkululeko Gwala, Thembinkosi Qumbela, Thuli Ndlovu and Nqobile Nzuza who have all died fighting for the right to access land. In all these killings we have received only two convictions.

In Durban we have seen how the housing budget has not been used to assist people who need housing. It has been misused by the ANC to enrich party leaders and to divide and control impoverished people. We have seen the same with the Public Works Programme where only card carrying members of the ANC are employed.

Abahlali baseMjondolo have been building the democratic power of impoverished people for more than ten years and engaging in urban planning and land reform from below. We have been implementing ‘expropriation without compensation’ for more than ten years. The land that we have occupied was taken from below and held, often at a very high cost, against a violent and repressive state. ‘Siyahlala ngenkani’ is an important slogan in our movement. We have often made the point that for impoverished black people the price for land has continued to be paid in blood. Our experience is that for every land occupation to be successful, there must be bloodshed.

The land reform from below that we have achieved is a progressive action by democratically established grassroots formations who occupy land not for profit but for survival and towards living a decent life. However, this has not come easily. We have become experts in organising political funerals. We have scars as a result of occupying land. Regardless of this extreme repression we continue to fight for the rights of the poor and marginalised.

Today the hypocrites in parliament are talking about the expropriation of land without compensation yet they continue to drive poor people off of the land in the cities. In KwaZulu Natal the ANC divide people according to their tribe, while people from the Eastern Cape are evicted and told to go back to their province.

Thapelo Mohapi is the General Secretary of Abahlali baseMjondolo.