By Patrick Bond, Professor of Political Economy, University of the Witwatersrand Originally From The Conversation

The whole economically-aware population of South Africa is celebrating that the three main ratings agencies held off on junking the country’s financial reputation in the past two weeks. I am celebrating too. But a closer look is needed.

The statement by Standard & Poors – more strict than Fitch and Moody’s – lacked logic and conviction. Aside from predictable neo-liberal nostrum to cut the budget deficit and reduce labour’s limited influence even further, Standard & Poors neglected some critical economic weaknesses.

Credit rating agencies are dangerous institutions. Their mistakes can be catastrophic to investors and the broader economy. As the 2008 world financial meltdown gathered pace, for instance, they gave AAA investment grade ratings to Lehman Brothers and AIG – just before these companies crashed.

No wonder the Brazil-Russia-India-China-South Africa 2016 summit in Goa agreed to explore setting up an independent BRICS Rating Agency based on “market-oriented principles” to “further strengthen the global governance architecture.”

However, given how poorly “market-oriented principles” hold up in today’s chaotic world financial system, this strategy appears as serious as the BRICS’ alleged “governance” reform of the International Monetary Fund in December 2015. Then, aside from South Africa which lost 21% of its vote, four BRICS members increased their IMF voting shares. This was mainly at the expense of poor African and Latin American countries. 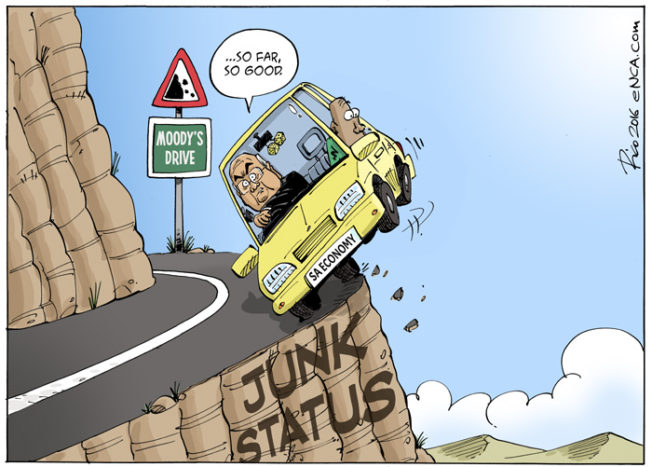 This week the main question to ponder is why, given utterly zany politics and the stagnant economy, South Africa was not downgraded all the way to junk. S&P lowered the risk rating of local state securities, but not the sovereign debt grade considered by foreign investors.

The main reasons Standard & Poors gave for the reprieve are telling:

“the ratings on South Africa reflect our view of the country’s large and active local currency fixed-income market, as well as the authorities’ commitment to gradual fiscal consolidation. We also note that South Africa’s institutions, such as the judiciary, remain strong while the South Africa Reserve Bank (SARB) maintains an independent monetary policy.”

What Standard & Poors meant by a “large and active local currency fixed-income market” is that exchange controls stipulate that pension and insurance funds must keep 75% of assets inside the country. This creates a large artificial local demand for state securities.

“Gradual fiscal consolidation” was a reference to Finance Minister Pravin Gordhan’s promise that the budget deficit would fall from this year’s 3.4% to 2.5% by 2019. But this will require cuts into the very marrow of already tokenistic social grants. It will result in recent increases for 17 million recipients falling below the inflation rate faced by poor people.

To say that “institutions such as the judiciary remain strong” means not only do the courts regularly smack down President Jacob Zuma. They also religiously uphold property rights. In South Africa these are ranked 24th most secure out of 140 countries surveyed by the Davos-based World Economic Forum.

“The SARB maintains an independent monetary policy” means that in spite of incredibly high consumer debt loads, the SARB has raised interest rates four times since 2015. Nearly half the country’s active borrowers are considered ‘credit impaired.‘

Another reason S&P is optimistic is supposedly that “The trade deficit is declining on the lower price of oil (which constitutes about one-fifth of South Africa’s imports)…” In reality, the trade deficit just exploded: from a R19 billion trade surplus in May to a R4.4 billion deficit in October.

Meanwhile over the past month the oil price soared 21%, from $43 to $52 per barrel. OPEC’s latest collusion to cut output is likely to push the oil price past $60 in coming weeks. The stronger rand witnessed over the course of 2016 did not offset that rise because over the last month, the rand fell from a high of R13.2/$ to around R14/$.

Not only are S&P’s rudimentary observations off target. The silences in its statement are telling. For example, S&P was surprisingly blasé about the country’s foreign debt. The last SARB Quarterly Bulletin records debt at the highest ever (as a ratio of GDP) in modern South African history. It now stands at 43%. That’s higher than apartheid-era President PW Botha’s 1985 default level of 40%.

S$P does not mention South Africa’s exceptionally high international interest rates on 10-year state bonds. At 9% these are lower only than Brazil and Turkey. It ignores corporate overcharging on state outsourcing, which the Treasury’s Kenneth Brown says costs taxpayers R233 billion per year.

To S&P’s credit, however, the agency was concerned about “the corporate sector’s current preference to delay private investment, despite high margins and large cash positions”. In an opposite signal, though, S&P awarded the country’s leading disinvestor, Anglo American, an improved credit rating on Friday.

It still strikes me that like the Gupta and Rupert families, the ratings agencies will continue attracting the accusation of “state capture” insofar as the public policy this neoliberal foreign family dictates is also characterised by short-term self-interest, occasional serious oversights (such as those above) and national economic self-destruction.

The only reasonable solution is progressive delinking from the circuits of world finance through which these agencies accumulate their unjustified power.