The Capitalist system remains irrational, and is not about to change now because of political events

Despite the recent downgrading of South Africa’s sovereign credit rating to junk status by Standard and Poor’s (S&P) Global and Fitch Ratings, foreign investors should be the least of our problems, and I will illustrate why. What must be of concern to everyone is tremendous inequality, high unemployment and extreme poverty the African National Congress (ANC) has failed to offer meaningful and sustainable solutions for. It is the more than 17 million social grants recipients’, poorly skilled youth, millions of workers who earn below working poverty line, and millions languishing in squalor hungry we must all be extremely worried about.

In Fitch Rating Agency statement when they downgraded South Africa’s long term foreign and local currency issuer default rating from BB+ from BBB-, central to the factors mentioned was cabinet reshuffle. Fitch said, “the tensions within the ANC will mean that political energy will be absorbed by efforts to maintain party unity and fend off leadership challenges and to placate rising social pressures for addressing departmental demands for increased spending may also weaken”. In similar approach, Moody Rating Agency said, “the negative outlook reflects our view that political risks will remain elevated this year, and that policy shifts are likely, which could undermine fiscal and economic growth outcomes more than we currently project”.

The idea that rating agencies acting in the interest of investors, foreign investors in particular, are concerned about political events is misleading and simply illustrate deepening crisis of the capitalist system. But more importantly, this is a clear call on the progressive left forces to properly understand the changing nature and character of capital, and its impact on domestic political environment. Of which failure to do so, there is likelihood of growing understanding that capital operates within rational basis and we will have people like the new Minister of Finance Malusi Gigaba saying inclusive growth, radical economic transformation, unchanged macroeconomic policy and prioritize foreign investment in one sentence and it becomes perfectly acceptable. This is an understanding that must be exposed and discredited for what it is, deepening crisis facing the capitalist system.

It must be said from onset that the capitalist system does not work within rational basis and it is not about to start now. And the contradictions and irrationality of capitalist system is something that has been thoroughly problematized by many economists’ likes Ha-Joon Chang, Thomas Piketty and others. With that in mind, the purpose of this short piece must be viewed in boarder need to aggressively understand the changing nature and character of capital. And one of many questions in this process that must be asked is whether within the capitalist system, foreign investors are concerned about political events, particularly ‘political instability in emerging markets’ as referred to by rating agencies? This is not a new question, and historical contexts offer a clear basis going forward. 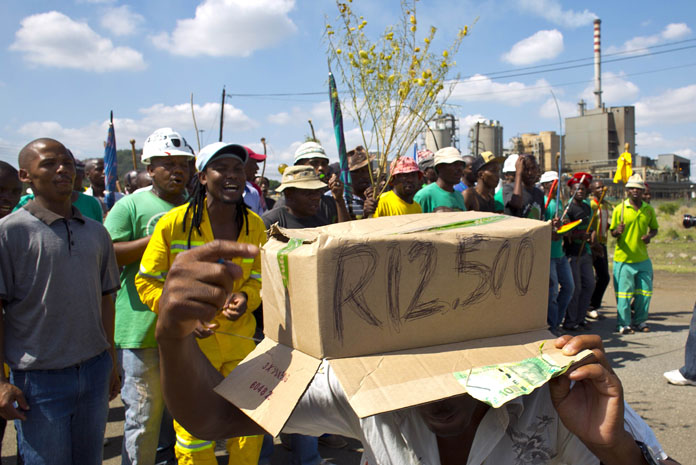 A striking miner holds a cardboard box on his head with text reading “12,500 Rands” as striking miners chant slogans while marching to Wonderkop Stadium near Lonmin’s platinum mine in Marikana on January 23, 2014. AFP PHOTO / ALEXANDER JOE

In 1972, the Fortune magazine remarked that, ‘the Republic of South Africa has always been regarded by foreign investors as a gold mine, one of those rare and refreshing places where profits are greater and problems are small. Capital is not threatened by political instability or nationalisation. Labour is cheap, the market is booming, and the currency hard and convertible”. Labour in South Africa has remained extremely abundant and cheap. More than 100 years of institutionalised slave wage remains intact. When the ANC government killed mine workers in Marikana for demanding R12 500 living wage, it was a remainder of such exploitive institutions. South Africa being mineral rich country, the market is likely to recover as the global economy is gaining momentum through higher commodity prices among other factors. More than 40 years letter, Fortune magazine remarks is still very relevant.

In his book, King Solomon’s Mines Revisited: Western Interests and the Burdened History of Southern Africa published in 1986, William Minter illustrate how “the social order of segregation, far from withering away, had been systematized and bureaucratised under the Apartheid label”. Minter observed how even though “in theory this might be irrational for modern capitalism, but like Ian Fleming’s Goldfinger, investors in Zurich and New York as well as London and Johannesburg found it (South Africa) profitable”. And as long as South Africa was profitable, modern capitalism could not be prevented from exploiting the situation by what seems to be irrational. Post 1994, South Africa’s financial sector has been among the most profitable economies in terms of return on investment for foreign investors. Foreign Direct Investment (FDI) now accounts for more than 40% of the GDP. This is despite the high unemployment, corruption, inequality, high poverty levels and crime.  Just goes to show how irrational capital is.

John Saul simplifies this in his book the Next Liberation Struggle: Capitalism, Socialism and Democracy in Southern Africa, when he said through the capital eye whose concern is not developmental or political stability. As long as the prospects to exploit profitable opportunities exist, the prospects will always appear bright enough despite social and political instability.

Thomas Piketty, in his famous publication “The Economics of Inequality” of 2015, makes an interesting observation that unless there is social and political struggle, and that the redistributive efforts of government penetrates to the very heart of the productive process, capitalist in this case foreign investors are unlikely to be bothered including by ‘political instability’. As long as market forces that determine the profits of capitalists and unequal remuneration of workers remains intact. Minister Gigaba confirmed that with his appointment, “the work of the Ministry of Finance will continue guided by policies of the ANC”. ANC policies that have guaranteed maximum profits for foreign investors without interruption at the expense of unemployed youth, poorly paid workers and majority of landless poor black people.

The historical and ideological illustration that foreign investors in a capitalists system facing serious crisis are not at all threatened by political events, let alone instabilities does not mean downgrades to junk status will not have consequences. Since the ANC has relegated the core responsibility of managing country’s macroeconomic policy to foreign international capital and rating agency. Such downgrades have devastating effects on country’s abilities to borrow for the purpose of budget shortfall. No doubt South Africa will find it difficult to raise funds for its budget deficit. When we do borrow, no doubt it will be more expensive.  When we don’t borrow, no doubt austerity measures will affect governments ability to expand delivery of social services. After all, the International Monetary Fund (IMF) will not bail the country out of its balance of payment difficulties without conditions. This is inescapable looming future we must be ready for.

Because of Mr. Zuma derelict leadership, it does not matter how one looks at it. Any scenario leaves the poor poorer, the unemployed with minimal chance of securing decent employment, and the working class poorer as their income diminishes against increasing prices as long as the ANC continue to govern. It is not the foreign investors that need immediate attention. If there is any chance for economic freedom in our lifetime, it is not going to happen through prioritising foreign investors but inward looking and prioritize of domestic key stakeholders, the most vulnerable, workers and citizens through civic society mobilisation of a progressive left bloc. But the left still has the responsibility to thoroughly understand the changing nature and character of capital.

Gumani Tshimomola is a senior researcher for the EFF parliamentary caucus