By: Richard Raber. Origially published in the Daily Maverick 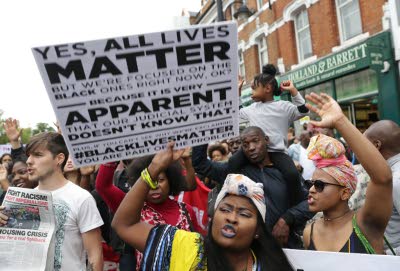 Beginning with the contention that most white people view racism conceptually as bad, evil or at least something that is undesirable to be associated with, it is disheartening to see so much support for reactionary #AllLivesMatter, #BlueLivesMatter and similar postracial rhetoric from ostensibly decent people. White America must seek to understand our own existence and its relation to the lived realities of both others and ourselves.

#BlackLivesMatter is a step towards the fulfilment of the modest ethical idea that all human beings deserve dignity and have an inherent right to life; something that the vast majority of #AllLivesMatter supporters (given the benefit of the doubt) may be trying to get across.

The problem with the #AllLivesMatter position is that it stems from a postracial imagination that assumes we have somehow moved beyond race. Unfortunately postracialism does not bind with reality – the legacies of slavery, convict-lease system, lynchings and Jim Crow breathe life into the lungs of contemporary police brutality and the prison-industrial complex, among other issues.

Evidently black life has been systemically deemed disposable. While individual whites may be treated brutally, such abuse has never been institutionalised in our policies and structures of power. This reflects the fact that normatively black life is pathologised while white life is individualised. The interrogation into the personal lives and criminal records of murdered people of colour combined with the relative silence on that of the officers’ reveals this.

The kind of formal equality achieved by the Civil Rights Movement has not stopped historical circumstances that continue to shape the lived experiences of communities of colour profoundly. Increasingly, race has been viewed as aproblem of the past for (primarily white) postracialists. At the heart of this confusion is that equality does not always amount to equity; political equality alone may not create an atmosphere of fairness and opportunity for all. Without addressing existing disparities, universal or unspecialised initiatives are empty, thus in terms of protection of human life #BlackLivesMatter.

It is difficult not to view the rise of the #BlueLivesMatter concept as highlighting both an intellectual flaw as well as a gut-wrench reaction to black liberation in some with internalised racism; standing for an idea or community does not necessitate the devaluation of another concept or group.Defending the lives of black citizens does not mean wishing ill upon police officers – it is actually what most people want the latter to do.

A potential product of #BlackLivesMatter could be the improvement of Blue Lives, as pressure from civil society is needed to reform institutions of power and thus create conditions conducive to the formation of relationships with communities of colour. However, while that would be a welcome result, the inherent value of black life must remain primary and is not contingent on the depreciation of any other community.

Perversely, postracialism exists among some white supporters of #BlackLivesMatter intent on showing solidarity. White supporters of #BlackLivesMatter must understand that police brutality, racialised poverty and similar issues are not simply stemming from individual racist whites or cops; we are all racist, it is impossible not to be. When living under a system of white supremacy it is impossible simply to extricate oneself from the system or proverbially stand outside of it.

The belief that one can step outside of this context is itself a position of privilege, reinforcing a system of domination said person is opposed to. Intellectually rejecting a phenomenon does not prevent benefiting from its existence. This country was birthed in the dispossession of indigenous peoples and nurtured in the bondage of Africans; racism is built into the fabric of the settler-state.

For many of us from ethnic white backgrounds, recognising our own privilege and internal racism can be especially challenging given our own families’ histories of oppression. Understandably it can be very painful to reconcile the fact that the Americanising or whitening of our communities was contingent on the exclusion of black Americans, as highlighted by scholars such as David Roediger. While our families may not have been present during slavery or colonialism, in the American context we have still benefited from its occurrence.

For white Americans writ large, moving forward we must re-evaluate how we look back on our history while changing our perceptions of current events. Far too often we relegate historical themes and events as well as modern phenomena led by people of colour as theirs and thus something over there. While we must respect the ownership of experience of oppression we need to begin to question how being on the other end of oppression has affected us.

Inaction in this regard is both a manifestation of privilege and a poverty of understanding; self-criticism is one of humanity’s strongest tools, use it. In conversation with Margaret Mead, James Baldwin hit the proverbial nail on the head: “ …somewhere, something happened to white people one day, I don’t know what it was, which dictated their sense of reality”. In others words, the enforcers and benefactors of white supremacy have been morally damaged, implicitly recognising the fallibility (and thus humanness) of whites. Part of coming to terms with our own history and privilege is understanding the perversion of white supremacy; a system so toxic it even serves to denigrate its benefactors.

Working towards ending white supremacy should be a political project all white people support. Genuine participation stems from a sense of justice and should not require Pavlovian reinforcement from self, other white people or people of colour. When actions against white supremacy are done for self-congratulatory reasons or to alleviate white guilt, integrity and merit are lost from the act; this expectation is itself form and function of privilege.

In order for white people, all of us, to work effectively towards dismantling white supremacy we must first recognise and attempt to expunge our own internal racism and privilege, transform guilt into action and mobilise away from a politics of apathy and towards a politics of responsibility.

These steps must be taken both internally and in our actions in collaborating with and listening to our family of colour. Vital to this process is a humbling; white people need to stop expecting to be celebrated for being decent.

Richard Raber is a Canadian-born activist currently based in New York City. Previously the Mail & Guardian’s Thought Leader platform as well as New Politics and others have featured his work. The author’s writing does not necessarily reflect the views of any organisation he is or has been affiliated with, and are also subject to change. Richard can be found on Twitter @RaberRichard. This September, he will become a master’s degree candidate at the European Inter-University Centre for Human Rights and Democratisation based in Venice, Italy. Other works of his can be found at http://richardraber.blogspot.co.za/