A Popular Hegemony – Students and Struggle

Entering a new round of struggles, bruised and smarting from a defeat, students across the country are coming to realise that this year may prove decisive in the battle for free, decolonised education. The current lull in protest presents an opportunity to take stock, understand the problems and search for prospects. What are the conditions in which we are struggling? What do we hope to achieve? Importantly, how do we get there?

More importantly, how do we counter the petty-bourgeois, bourgeois and opportunist elements of fallism? These elements have not only played straight into the hands of a government dedicated to neoliberal rule. They also provide no strategic guidance and employ disastrous tactics, such as seen at Kempton Park.

First though, a note on context. It should come as no surprise that the student uprising has been led by the first generation of “born-frees” – those born around the transition from Apartheid. We were raised under the myth of a rainbow nation. We have matured in a reality far from the dreams sold in 1994.

To be sure, the transition to democratic rule in itself presents a major victory for all South Africans. Civil war would have resulted in the decimation of the country and its people. Avoiding that, together with the ushering in of a democracy in which political freedom is guaranteed, was no small feat. The problem is that the economic and social policy pursued by the hegemonic ANC since then has not taken us beyond the terms of the compromise. Twenty years on, and this failure is quickly causing the disintegration of the ANC’s hegemony.

It is in fact the ANC’s failures over the past twenty years which are at the root of what Saleem Badat calls the “organic crisis” of universities. Determined to pursue a neoliberal governance and economic path, the ANC has straight-jacketed itself. Its policies simply do not allow it to break free of the power of international and local capital of any kind, crony or monopolisitic. 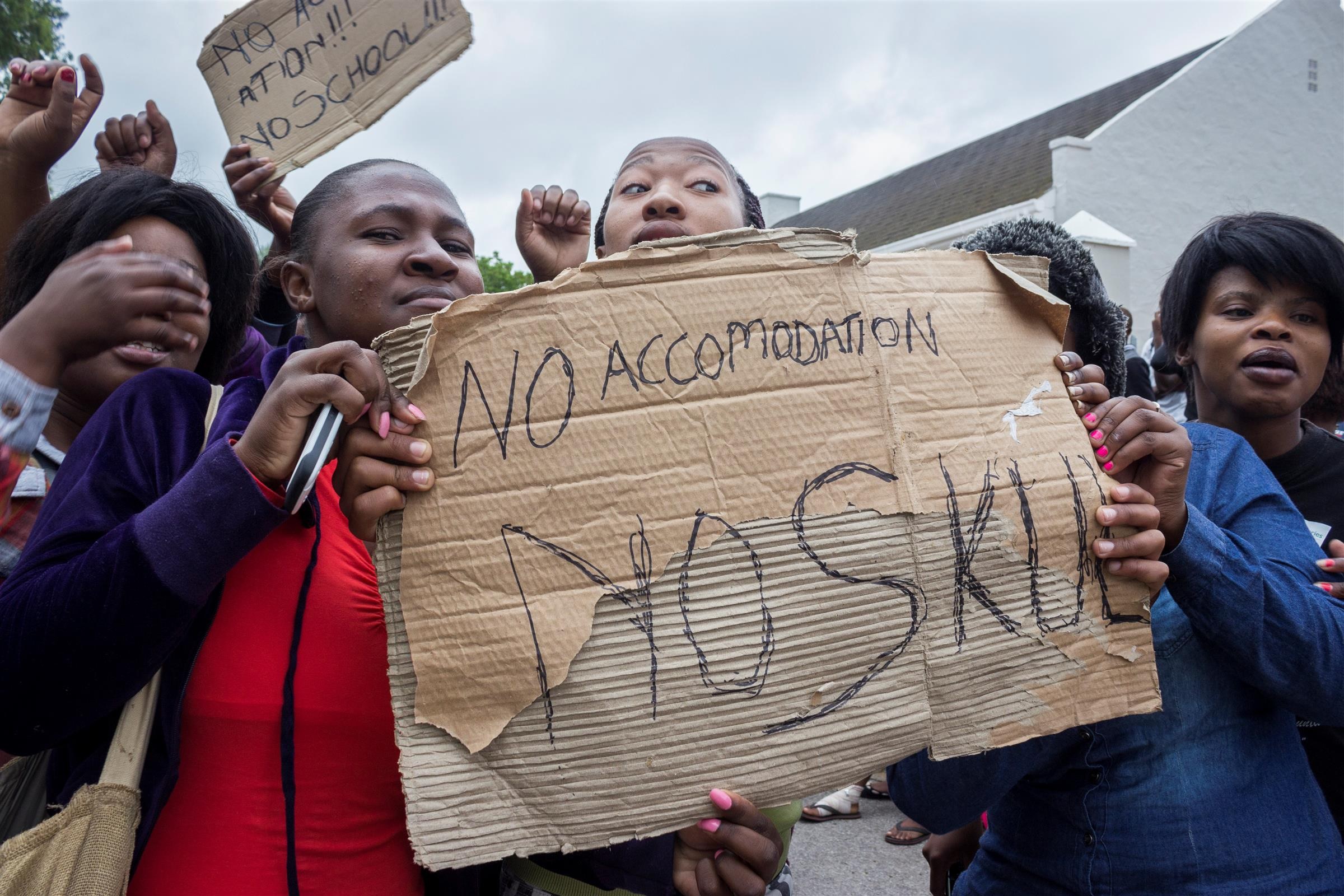 Unity must be the watchword. It must be a unity forged in struggling for immediate demands such as accommodation, food, security (particularly for women and those who experience gender and sexual violence).

The ANC ditched the social democratic Reconstruction and Development Plan (RDP) and turned to the neoliberal Growth Employment and Redistribution (GEAR) and National Development Plan (NDP). This “social extractivism” has been persistently, if spontaneously and sporadically, resisted in the numerous “service delivery” protests, strikes and land occupations. The restructuring of labour, and downward pressure on wages, dramatically boiled over in the tragic massacre at Marikana. Universities and students have not been immune from the effects of “rationalised” government – reduced funding, cost recovery, corporatisation and the restructuring of labour at universities.

The ANC has been and continues to be at the forefront of an attack on the capacity of the state to deliver on a historical promise to transform the lives of the working and popular classes. The ANC abuses the political power the popular classes have given it. It is no longer willing or able to tackle the fundamentally unjust economic, social and political structure of South Africa. The effect is to leave contradictions of race, gender and class unresolved and aggravated. It is captured by the petty-bourgeois and opportunist elements which have been part of the decimation of organised forces of the people. These include once gigantic institutions such as COSATU, as well as grass-roots movements, which at their height comprised the United Democratic Front of the 1980s. Today the petty-bourgeois and opportunist elements at the universities, in typical fashion, are loudly and with disastrous consequences laying claim to these struggles of the popular classes.

If we are to remain faithful to Amilcar Cabral’s famous call, then we must be careful not to claim easy victories. Fallism has become a part of our vocabulary. But that is more as a result of the sound and fury which animates the protests than the united and organised mass power of students. Without dismissing the creative potential that the movement and students possess, the lack of patient, persistent and thorough organising on the part of Fallists has resulted in the defeat of last year. Despite some valid and some not so valid criticism of the National Education Crisis Committee, celebrity Fallists and opportunists from the political parties brawled on live television. A united student movement, with mass support, including strategic allies, and a clear strategic and tactical approach should have used the platform to drive forward the demand.

Easier said than done… Putting aside identity, political and ideological differences in order to build mass support for Free Decolonised education will require more than a theoretical or even moral argument. Building a mass movement requires patient and persistent work. Students cannot come together at the end of the year and expect everyone to be on board because of the obvious justice of our position. We need to use the time we have now to build a movement with mass support of students, organic links with popular movements in communities, the unions and rural movements, and a politically independent stance. This must ensure that the goal of free decolonised education is not sacrificed at the altar of opportunism. Spontaneity and drama are good for bringing an issue to the fore. But building a movement capable of pushing forward an alternative requires unity of purpose and identity.

Unity was must be the watchword. But it must be a principled and programmatic unity. Our interests as students, particularly as black working class students, do not lie with opportunists and sexists. They lie in working together to carry through programmes that bring change to the material and spiritual life of students. It must be a unity forged in struggling for immediate demands such as accommodation, food, security (particularly for women and those who experience gender and sexual violence). It must be a unity which includes constant strategising for longer term goals, and building of a new political culture, symbolism and mass support.

Unity must also extend beyond the ivory towers. Beyond the political parties, students must seek out those movements and grass-roots organisations, workers, high school learners and communities engaged in the fight against neoliberalism, capitalism and the oppressive systems of patriarchy and racism. The higher education crisis is only one instance of a generalised crisis we are experiencing at the moment. It will be imperative that we make the links to forge unity across divisions rather than within them. Political opportunists, Mzuptamites, petty-bourgeois elements and celebrity fallists must be out-organised by the mass of students, conscious of their interests and unwilling to be distracted by divisiveness, empty rhetoric and poor strategy and tactics.

Chris Morris is a Politics Student at the University Currently Known as Rhodes (UCKAR). He is a member of Asinamali and writes in his personal capacity.