Pay Back the Curry [Review]

Pay Back the Curry Review 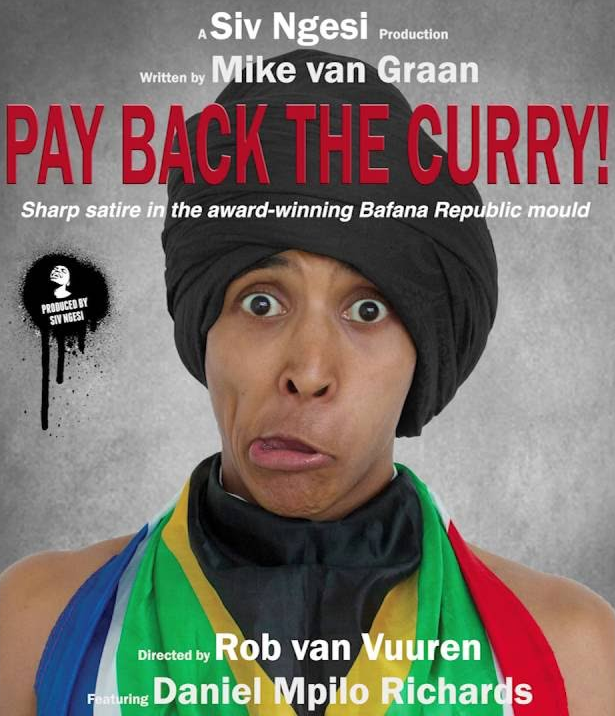 In Mike van Graan’s one-person revue, “Pay Back the Curry”, the multi-talented Daniel Richards take us on a journey in a time machine en route from a terrible past to a glorious happy future.   However, the journey is immediately interrupted by technical faults and Daniel ends up stuck in the present instead. Here the absurdities of contemporary South Africa are laid bare through a series of sketches.

Physical theatre, slapstick, stand-up, song and even a Shakespearean Julius are combined to reveal the corruption, myopia and farce of our sad condition. Maimane, Gwede, the Fallists, Des van Rooyen’s Weak Rand Special, the powerlessness of Eskom, Penny Sparrow and the art of being a racist estate agent, Dudu Miyeni and the crash-landing of SAA and centrally the Guptas and their number one patron all get the treatment.

The revue, which has had very successful runs at the National Arts Festival and around the country since then, travels through the South African wastelands at breath-taking pace.   It is funny, outrageous, provocative and sometimes profound.   The xenophobic parody of Thabo Mbeki’s “I am an African” powerfully touches emotions.   Mike van Graan’s consummate wordplay combines with Richard’s youthful exuberance and technique to produce fast entertainment that, like fast food, has the people clamouring for more while begging some questions about the nutritional value of the offering.

A limitation of a multi-sketch production like this is its randomness. The shotgun skewering of so many aspects of contemporary life, from the sexism inherent in an award for a “female” footballer (when men’s football is never qualified by gender) to a gag-inducing rendition of Oscar’s femicide, leaves one with the absence of pattern. There is no explanatory narrative that transports us beyond the immediate, no coherent story that seeks to understand why we have come to where we are and what it is we need to do to go forward.   The problem is of course compounded by the large cast of pantomime villains like the Guptas that we serve up so easily as a country right now.   They are such soft, easy and deserving targets of ridicule.

Then it struck me that the format of the revue, possibly by design, mimics our contemporary public discourse.   Our South African soap opera itself is a series of slapstick skits. Every day serves up a new scandal and more incontrovertible evidence of corruption and state capture. The instant world of twitter responds with feigned outrage in less than 140 characters.   And yet nothing happens. Brazen lies are repeated.   The good, not the corrupt, get fired. The president laughs. Nothing changes. The truth is upside down. We, like Daniel Richards, in his time machine, are stuck in the present.

Describing our current absurdities is the easy part. False outrage is the distraction. The hard uncomfortable work lies elsewhere. It lies in accounting for how we got here. Like the hubris of those who determined that the obviously venal Jacob Zuma could be controlled by the left rather than being captured by the thieves. Like the strange silence and loss of courage of so many brave democrats for too long.

The accounting requires us to understand South Africa through the lens of tragedy rather than farce. We need to face the very human temptations, fallibilities and failings, individual and collective, that brought us to this point. The complex ambiguous falls of the Vavi’s and Ramaphosa’s are tragedies.   Marikana is a tragedy. The Zupta’s are simple farce.

But the hard work lies even more importantly in discerning where the energy for positive change springs from at this point. Trust in Pravin? The Mmusi-Julius entente as the future of a new coalition politics? Fallism will rise? The mould of our politics is being reshaped in surprising and counterintuitive ways.

It is enough to note that the hard necessary work is always about piecing together again the committed institutions, the unlikely alliances, the fresh thinking, the rejuvenated values and the renewed courage required for progress.

Does contemporary theatre push us enough to grasp these nettles?   Is there enough cultural effort that digs deeply into our diseased bodypolitic to find the hurting points rather than just tickling the funny bone? The fare served up at the National Arts Festival 2016 did not generally rise to the challenge.

And yet, as we emerge out of 2016’s winter of discontent, there are small signs that things are shifting.   Pay Back the Curry is refreshing. Has spring arrived?

David Schmidt is a leadership and institutional development practitioner who is much interested in the Arts.