by the Alternative Information and Development Centre (AIDC) | 6 November 2017 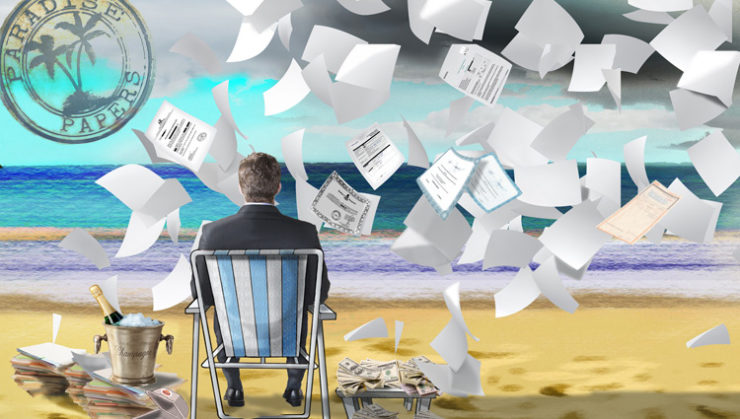 In the Bermuda Connection (2015), the Alternative Information and Development Centre (AIDC) research on Lonmin illustrated that the harm done by Illicit Financial Flows (IFFs) goes well beyond a diminished tax base. What is insufficiently recognized is that though tax evasion is often highlighted, IFF’s also results in a much greater loss to the South African economy – wage evasions, perpetuating the low-wage regime.

The Paradise Papers, a second batch of leaked documents is a massive leak of data from 19 secrecy jurisdictions, that proves how transnational corporations (TNCs) evade taxes and wages through profit shifting, thin capitalization and trade misinvoicing.

The leaked documents underlines the systemic nature and huge scale of wage evasion.  These flows facilitate the ever increasing wealth of TNCs and the rich, at the expense of the growing number of poor. The latest estimates put the worldwide losses to governments at $200 billion a year because of unpaid wealth tax, and a further $500 billion in unpaid corporate income tax but this doesn’t even take into account the further money outflows constituting wage evasion.

It has to be highlighted that the shady tax evasion modus operandi of TNC’s and the rich is enabled by offshore law and auditing firms, like Appleby. They find ways for TNCs and the rich to conceal their wealth in tax havens and secrecy jurisdictions to avoid paying workers a living wage and depriving governments of billions in much needed taxes.

Large corporations like Lonmin, undertake profit shifting practices to declare less profits, in order to claim that they have no money for ‘unrealistic’ wage demands. This leaks shows that far from being an exception, these practices are systemic.

Trade unions have an important role to play in ensuring that corporations are held to account. If workers organise themselves and trade unions insist on seeing the financial statements of subsidiaries where their members are employed, it can be powerful tool in wage negotiations – in the demand for a living wage.

In order to lift the corporate veil, dismantle the architecture of impunity and curb wage evasion by re-establishing popular sovereignty over the economy, we, as AIDC, requires the SA government to: