Following the “R3500” national minimum wage (NMW) proposal from the government, we hope to see the start of a broad public debate about the conditions for the workers in South Africa. We welcome this debate pushed by unions and civil society who relentlessly has arguing this cause and now have a long overdue response.

There has already been a “R4500” response from Cosatu, a “at least R5000” response from EFF and “R6500” as an absolute minimum, from other progressive observers and researchers. Given this, we must talk about what the working class can do to improve its position and how the pillars of the low wage regime in the country can be brought down. Especially, since it was inevitable that a “compromise” bid from the government that has all kind of strings and exemptions attached to it would lead to a divided response from the working class and the broad public, and since what the people want is a living wage.

On the one hand, more than six million employed workers are paid below and way below R3500 per month. R3500 would in fact double the pay of millions of workers. Given the massive amount of overtime worked, a comfortable majority of workers no doubt earn less than this bid for a minimum, which can be translated into “R20 per hour”. This is why media can catch positive responses from many women and the men on the street.

On the other hand, the majority of employed workers are the only bread winners in their families of children, elders and unemployed. Divided on four or more family members, R3500 will not even lift their incomes above the official poverty line. This is why the proposal also has met an outcry of protests and strong concerns. Any national minimum wage is at risk of becoming a national maximum wage, giving credibility to every employer that is paying R1 more per month than R3500. Used in that way, a low minimum wage will can undermine the struggle for better wages and working conditions.

From the point of view of the Constitution with its guarantee of dignity for everyone, the suggested R3500 is an insult. Everyone knows we need the implementation of a living wage, no matter if a national minimum wage is decided. This living wage will not be done in legislation, or through a ‘social compact’ where Government, Business and union leaders agree to limit the right to strike, as demanded by credit ratings institutes. It will be done by workers fighting for higher wages at the expense of profits. 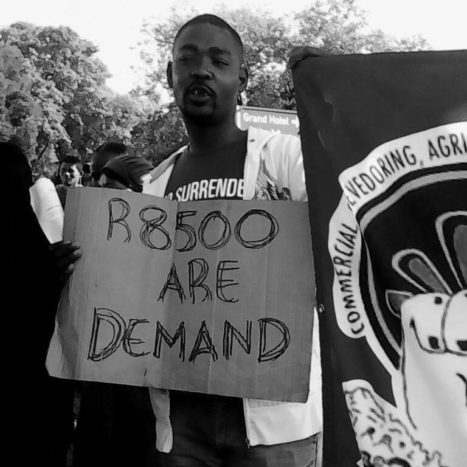 As I write this, this was right now demonstrated by 220 workers at Robertson Winery in Western Cape. Today, the strike settled just above the R3500 per month for the majority of the workers. This happened after 14 weeks of strike where the workers had demanded R8500 as a living wage minimum. For the grass roots, the battle will never be about the “absolute minimum” in its different shapes or sizes, all of which are now hurled against the “R3500”, but falling short of a living wage, all of them.

At the centre of the strike at Robertson Winery was the rule of business secrecy. The use of trusts, daughter companies, tax planning and – in the huge corporations – the use of tax havens and illicit capital outflows, is all a part of the structure that keep wages down in South Africa. These facts and that only higher wage levels can create economic demand that ends mass unemployment, must be a part of the roar against the “R3500”.

The battle on the ground has been and will be for a living wage, for a working life in dignity, for economic safety and security. Many of the lowest paid workers will not gain from minimum wage legislation. Large chunks of the labour market will be exempted from the minimum, as the government has already indicated. In other parts of industry, and in the informal or half formal sectors, the minimum will not be implemented. This is already the case with other laws designed to protect from extreme exploitation. When there isn’t lack of political will, there is simply no power to oversee and impose the labour laws.