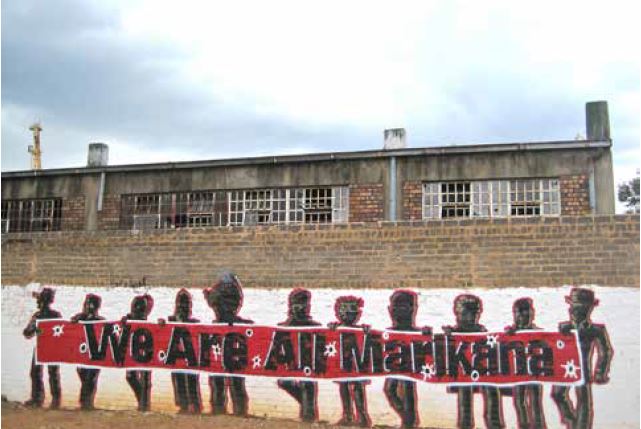 Often When the history of ‘big’ events is recorded, after a while the stories with specific details are often eroded and obscured. They are made to fit easily into a certain kind of analysis that endures over time. So much so that what are subsumed under these theoretical beacons of hope are the very real, very human stories of everyday life and the complexity involved in the moments leading up to them.

When one reads representations of Marikana among some left circles in the elite public sphere, there is a propensity to fit workers’ struggles into narrow and dogmatic forms of class analysis, in which race, class and gender politics can be divided neatly and spoken about separately. It is as if the inclusion of these issues are a threat to solidarity. The failure to see how workers’ struggles are profoundly linked to community-based struggles places workers in perpetual isolation. This isolation not only distorts the everyday reality, in which workers are part of a broader community, but also limits the way in which people think about the wave of strikes on the platinum belt in 2012. Often, the historical picture of male-only hostels on the mines endures despite the reality that there is a huge community of men, women and children present in Marikana. So much so that many representations of Marikana carry an overtone of triumphalism in which the Lonmin workers appear victorious. This tone distorts both the unfinished status of the struggle for R12 500 and neglects the counterattacks of Lonmin on workers over the last year.

This tone also distracts from the necessary moral outrage that should have been expressed after Marikana, which was both drowned by lies and distortions in the media pinning the massacre on savage muti-crazed miners or outside agitators, as well as by the left’s own triumphalism. Exploring other narratives of Marikana adds to our understanding of the reasons workers went on strike as well as how the confluence of race, class and gender issues affect people living in Wonderkop.

For example, many people in Marikana express concerns about the way in which race still functions as a mechanism of power and control on the mines, preventing black people from receiving promotions or getting wage increases. People are also concerned about their health and the lack of attention and compensation given to work injuries. It is less about changing the entire system – although there is no doubt that Marikana was a challenge to that system – than it is about improving one’s life and that of one’s family and community, and asserting one’s humanity. The notions of dignity, respect and communalism cannot be ignored. 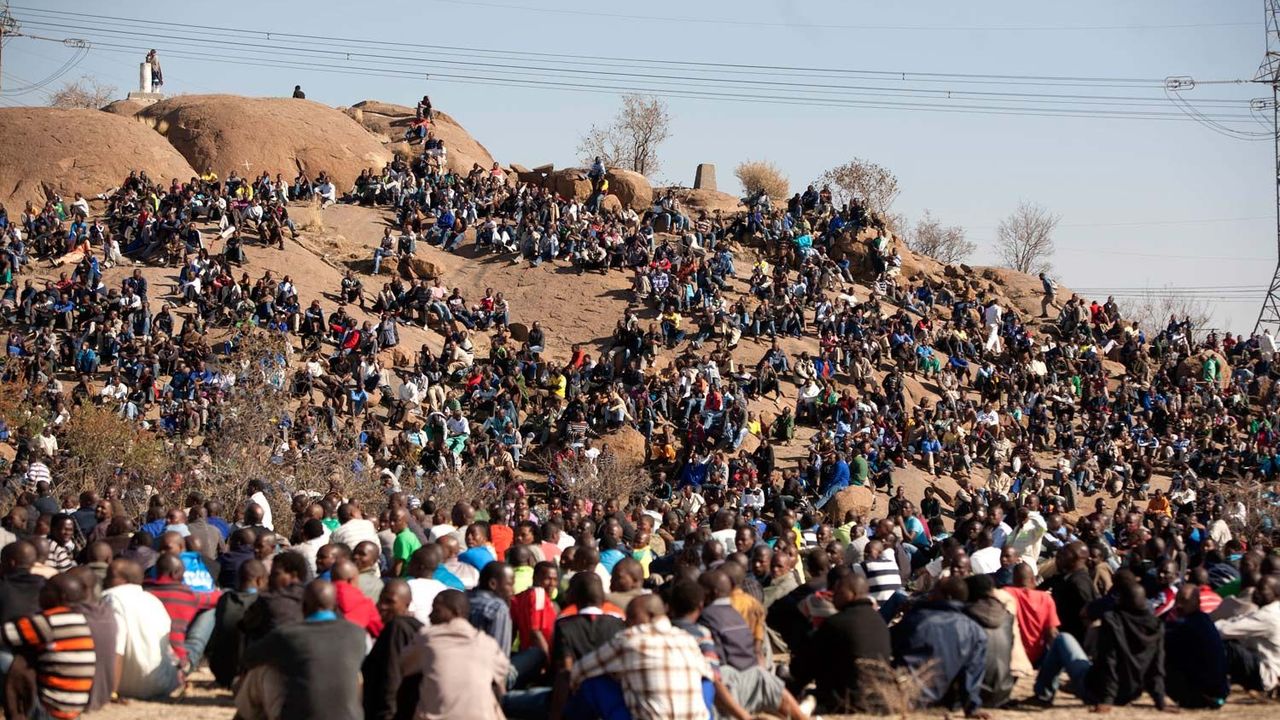 Many people spoke about how their families suffered because of these inequalities and how wives and girlfriends and mothers provided support. For Silvia Tklabane, her experience of Lonmin is profoundly shaped by the intimidation and racism of senior management who openly threaten her and refuse her promotion on the basis that she is a ‘trouble causer’. When she described her job situation she said, ‘I’ve got so many [problems] to tell, because really I, if I talk about these issues, I feel like I can burst, because this company really it doesn’t treat us like human beings. We are nothing, especially we blacks, we are nothing.’

Still, the representations create a sense of isolated workers fighting against capital, with their families as merely dependent on their wages. Yet Inkaneng is a huge community in which the Marikana women’s group has been instrumental not only in sustaining the men on the mountain during the strikes and then caring for them after the massacre, but also in struggles around land, water, electricity and roads which many in the settlement still live without. Accounts of resistance should not treat this as separate from workers’ struggles for wages, dignity and respect. The support and solidarity of the community before and after the strikes allowed them to endure over a long period, as has historically been the case in South African history.

When Simba Chips factory workers went on strike during apartheid, there was an immediate boycott of Simba products in their respective communities, as was the case in the famous red meat and Colgate boycotts. In many instances, these acts of resistance were organised and sustained by women, who usually made decisions about household purchases. Yet the narratives of worker struggles continue to write out not only the way in which women’s organisation and support strengthens workers’ struggles, but also how women, through care work and domestic labour, reproduce workers themselves.

This is taken up even by some forms of feminism to force the actions of waged and unwaged female labourers into a narrow frame which asserts that women who are involved in political action that centres on their role as mothers or care givers are not feminist. This notion of feminism and women’s politics proliferates in South Africa and often does not see women as agents in just any situation, unless they are talking about reproductive rights (not an unimportant issue in itself). Rather it is the failure to valorise the work of women in every community, to provide political will, support, care and often political organisation, that are the failures of feminist discourse.

Surely to take only women who scream ‘f*@# patriarchy’ seriously is equal to not taking workers who are not screaming ‘f#@%* capitalism’ seriously, and both are tantamount to denying the legitimacy of struggles that are not explicitly stating a political agenda that fits the elite norms.

The caricature of women on the mines in South African literature, perhaps thanks to Alan Paton and others, has been that women are always on the edge of urban deviance. They are at the mines as prostitutes, mistresses or beer-brewers, or they are common women whose contributions are only sexual. There is no doubt that this has historically been the case, that women migrants often had to attach themselves to men in one way or another because of the patriarchal structure of South African society. But the depoliticisation of sex as work, whether one is a wife, girlfriend, or sex-worker, creates the image of urban women as cheap and therefore operating outside of the realm of the political. Yet it is also the case that many women in Marikana have come to seek work, or to be with husbands and boyfriends or fathers and brothers, and to carve out a small space for themselves within the community and to improve it.

Sikhala Sonke, the women’s group in Marikana, began to organise because they felt they needed to support the men on the mountain, so they gathered women they knew, some of whom came from church groups, and first they prayed for the men on the mountain: their friends, lovers, husbands, fathers and brothers. Then they collected donations from Somali shop owners to cook food for the strikers. When the police entered their homes and the community space and began shooting, resulting in the death of a councillor and friend Paulina Masuthlo, they marched to the police station to say, ‘Enough!’ They marched for safety and security for themselves and their children and to be treated like human beings. For a while now, women in Marikana, and some of the men who are also part of SANCO, have been trying to organise around securing running water for everyone, and electricity. And around roads, which is one of the most important resources for them, since it is impossible to leave one’s home sometimes when it rains heavily. Lonmin, however, has never been helpful in this regard; not only have they refused them gravel for a road, but they have refused to fence off a dam where a child drowned last year on the way to school. Women have made contacts with various organisations in Johannesburg to learn more skills and to share their experiences and their struggles. Many of the women in Inkaneng remain unemployed and help each other through stokvels, or through subsistence farming, and provide support to the mineworkers who in turn support them.

Recently Nomzekhelo Sonti, one of the leaders of the women’s groups, wrote a play about the massacre that was performed by 50 women at the oneyear memorial held at Marikana. They continue to struggle for roads and for Lonmin to start taking more responsibility for its workers and their families. Some would argue that this is not a feminist organisation because it lacks the kind of ‘political thrust’ that Shireen Hassim and others believe should be at the centre. Of course, in the face of extreme conditions and little resources, the political will and organisation of women like Nomzekhelo Sonti and others cannot be seen as anything other than autonomous, radical political thrust rooted in community struggles within which workers’ struggles must be located.

Camalita Naicker is a member of the Amandla! Editorial Collective