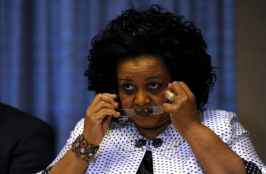 MINISTER Edna Molewa’s public rebuttal of a civil society complaint to the public protector regarding the elaboration of desired reductions in greenhouse gas emissions denies any shortcoming. This simply affirms the need for intervention by a Chapter 9 institution.

The minister’s generalities side-step the issue: ongoing failure to elaborate climate-change mitigation objectives for the medium and long term, the pressing need for which is clearly recognised in the policy framework the minister champions. It stipulates that 2030 and 2050 desired emission reduction outcomes be set within two years of its adoption, in 2011.

The complaint is not uninformed or generic, as described by the minister, and we are not “… attempting to ‘sanction’ the government”, but seeking remedial action, as stated in the opening: “This complaint to the public protector seeks an urgent instruction to government to elaborate national climate-change mitigation objectives, as required in the 2011 white paper….”

Recourse to the public protector follows many years of concerted effort including civil society participation in all available stakeholder processes and the proactive pursuit of documentation.

The latest “consultation” of stakeholders — a briefing by consultants commissioned to work on methodology proposals for a “phase two” to 2025 — confirmed persistent avoidance of big strategic issues or anything beyond incremental change.

The minister does note one pertinent development: “The Department of Environmental Affairs has engaged with the Department of Energy in its integrated energy planning process, setting an emissions constraint….”

The question put to Molewa in an open letter in May still stands: “When and how will stakeholders have the opportunity to deliberate … the question of the most desirable emissions trajectory or appropriate mitigation ambition for South Africa — the aspiration that will guide our planning and underpin our pursuit of international climate finance?”