“Some are born great,

and some have greatness thrust upon them”.

Mandela Day is celebrated every year on 18th July, Mandela´s birthday, to honour his legacy. Let us pay tribute to him as well.

After a long illness and great suffering Nelson Mandela, the father of our nation has died.

We do not believe in miracles. Mandela is not immortal. He has lived the fullest of lives. Amandla! stands with his family, the ANC (the organisation he lived and died for), his closest comrades, especially the surviving Treason Trialists and Robben Island prisoners, the South African people as well as millions of people around the world to mark the passing of a great man.

Yet Mandela was no God, no saint but a man of the people. He reaffirms that people born of humble beginnings can rise and achieve extraordinary feats. Victory is possible against all odds.

Mandela had all Shakespeare’s attributes of greatness. It is with this sense that the South African nation, such as it exists, in its divisions, polarisations and inequities pays tribute to a man that dedicated his life to the liberation of his people.

People who never knew Mandela have woken up to a sense of numbness, you only feel when told of the death of one’s closest. This is how most of Venezuela felt with the death of Chavez. Strangely in this divided nation, a nation still under construction and at times deconstructing, Mandela’s passing will almost universally be mourned.

He was dignified and above all he had an immense love for his people and for the project of building a non-racial and non-sexist South Africa. 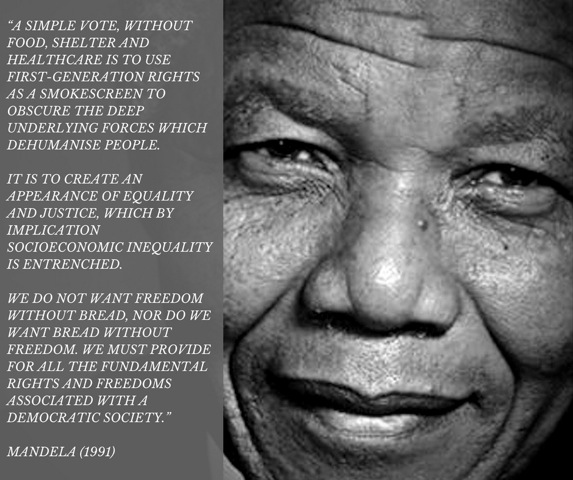 But above all he was an African man of conscience. He was a man of virtue. Virtue and conscience that made him so acclaimed globally since he led a nation at a time when virtue and morality were universally absent amongst global leaders. He slammed Bush and Blair for the war on Iraq: “What I am condemning is that one power, with a president who has no foresight and who cannot think properly, is now wanting to plunge the world into a holocaust.” For Blair he had these words: “He is the foreign minister of the United States. He is no longer Prime Minister of Britain.”

He rose above bitterness and resentment. He was self-sacrificing and could reach out to his enemies and cross many divides. He was great because he was the great unifier. In many ways he was the architect of the New South Africa.

But for all this we must avoid myth making. Mandela was neither King nor Saint

Mandela was not alone. You only have to read Bertolt Brecht’s great poem to know. Questions From a Worker Who Reads (alongside)

Who built Thebes of the 7 gates ?
In the books you will read the names of kings.
Did the kings haul up the lumps of rock ?

And Babylon,many times demolished,
Who raised it up so many times ?

In what houses of gold glittering Lima did its builders live ?
Where, the evening that the Great Wall of China was finished, did the masons go?

Great Rome is full of triumphal arches.  Who erected them ?

Over whom did the Caesars triumph ?
Had Byzantium, much praised in song, only palaces for its inhabitants ?

Even in fabled Atlantis, the night that the ocean engulfed it,
The drowning still cried out for their slaves.

The young Alexander conquered India.
Was he alone ?

Caesar defeated the Gauls.
Did he not even have a cook with him ?

Philip of Spain wept when his armada went down.
Was he the only one to weep ?

Frederick the 2nd won the 7 Years War.  Who else won it ?

Every page a victory.
Who cooked the feast for the victors ?

Every 10 years a great man.
Who paid the bill ?

The struggle to liberate South Africa was a collective effort. Moreover it was the power of the most downtrodden, the workers in the factories, the poor in the community, working class women and youth that brought the Apartheid government, if not completely to its knees – at least to negotiate the terms of the end of their racist system.

Every struggle needs a vehicle, a movement with a leadership that can give political direction, take the difficult strategic and tactical choices. Mandela’s ANC came to predominate. Yet Mandela was the first to acknowledge the role of a broad range of movements that made up the struggle for national liberation and the mass democratic movement.

And while Mandela was the one to initiate talks with the Apartheid government, he bound himself to the collective leadership of the ANC. He took initiative, he led but he did so as part of a collective. He was an organisational man. He was at pains to explain he was a product of the ANC He was a man of the black, green and gold but he could reach beyond organisational boundaries.

In the words of Fikile Bam, a Robben Island prisoner from the left-wing National Liberation Front:

“Mandela had this quality of being able to keep people together. It didn’t matter whether you were PAC or ANC. or what, we all tended to congregate around him. Even his critics — and he had them — deferred to him at the end of the day as a moral leader. He still has that quality. Without him I can’t visualize how the transition would have gone.”

Yes, millions of words will be spoken and written on Mandela’s legacy, now, in the months to come, next year and thereafter. And we will struggle to do this legacy justice. The most difficult part will be to capture the essential Mandela going beyond myth-making while accurately assessing the contradictory nature of that legacy.

For the present cannot be understood without understanding the past and not all that is wrong with current day SA can be put at the door of Zuma or Mbeki.

The negotiated settlement that brought about democratic SA on the basis of one person one vote will be regarded as Mandela’s greatest achievement. It avoided the scorched earth path of blood letting which we now see in Syria.

”His goal always was the deracialization of South African society and the creation of a liberal democracy, for that end he was willing to make compromises with people of different views. He was able to concentrate on his goal with utter conviction and lucidity, and he was a man of extreme discipline.”

And yet it is those compromises that are now coming apart at the seams. The unresolved social inequality that has given rise, in the words of Thabo Mbeki to South Africa as a country of two nations: one white and relatively prosperous, the second black and poor.

Mandela’s legacy will also have to be weighed by the fact that SA is more divided than ever as a result of inequality and social exclusion. The rich are richer and the poor poorer. The great unifier could undertake great symbolic acts of reconciliation to pacify the white nation but because, by definition, this required sacrificing the redistribution of wealth, reconciliation with the whites was done at the expense of the vast majority of black people.

Mandela was great but not so great that he could bridge the social divide rooted in 21st century capitalism that has given us the era of the 1 per centers. It is the unfortunate timing of SA’s transition occurring as it does in the period in which global power became rooted in the global corporation, empowered through the rules of neoliberal globalisation. Reconciliation required the abandonment of ANC policy as articulated by Mandela on his release from jail, “nationalisation of the mines, banks and monopoly industry is the policy of the ANC and the change or modification of our views in this regard is inconceivable.”

Yet it is this abandonment of nationalization, nationalization symbolizing the redistribution of wealth, which was dictated by the needs of reconciliation not just with the White establishment but with global capitalism. In the words of Mandela in an interview with Anthony Lewsis: ”Private sector development remains the motive force of growth and development.” His encounters with the global elite at Davos, the home of the World Economic Forum, convinced him that compromises were needed to be made with the financiers. It was also the late night encounters with the captains of South African capitalism such as Harry Oppenheimer that reinforced his belief that there was no alternative but the capitalist road.

In the words of Ronnie Kasrils: “That was the time from 1991–1996 that the battle for the soul of the ANC got underway and was lost to corporate power and influence. That wasthe fatal turning point. I will call it our Faustian moment when we becameentrapped – some today crying out that we ‘sold our people down the river’”.

It is precisely this capitalist road that has proved such a disaster and which may ultimately destroy Mandela’s life’s work of the achievement of one person one vote in a united non-racial, non sexist South Africa. To do justice to Mandela’s life of dedication and sacrifice for equality between black and white the strugglemust continue.

It now has to focus on overcoming inequality and achieving social justice. In this struggle we will need the greatness and wisdom of many Mandelas. We will need an organisation dedicated to mobilising all South African black and white for the liberation of the wealth of this country from the hands of a tiny elite. We will need a movement like Mandela’s ANC, a movement based on a collective leadership with the combined qualities of Walter Sisulu, Govan Mbeki, Ahmed Kathrada, Fatima Meer, Albertina Sisulu, Chris Hani, Ruth First, Joe Slovo, Robert Sobukwe, Steve Biko, IB Tabata, Neville Alexander and the many greats that led our struggle for national liberation. But most importantly we will need the people who take their lives into their own hands and become their own liberators.

Is that not what Nelson Mandela fought for?