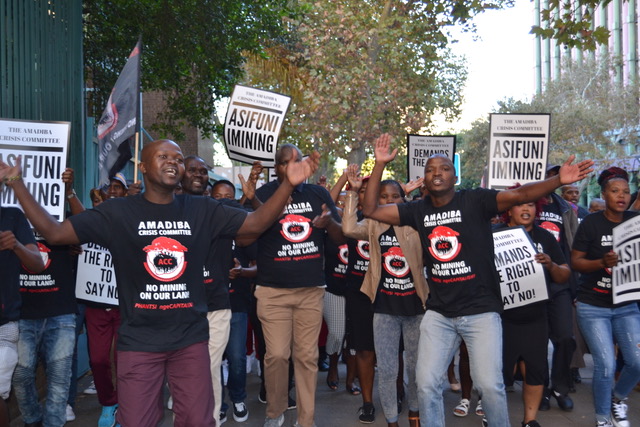 On 15 May, Nonhle Mbuthuma from ACC was allowed to be one of three “observers” when the Environmental Monitoring Committee (EMC) met at Wild Coast Sun. A journalist from SABC’s 50/50 was kicked out from the meeting.

The EMC is supposed to control how Sanral is proceeding with Nazir Alli’s N2 Wild Coast Toll Road (N2WCTR) and its ‘Green Route’.

“My surprise was”, says Nonhle Mbuthuma, “that it was not clear how to enforce the law or what to do when Sanral breaks the conditions in the Environmental Authorisation. Still the Department said Go Ahead.”

Which department can stop Sanral contractors from dumping land fill in wetlands? Where do they empty their portable toilets? Is it in the rivers? Nobody knows. How large shall the fines be? Where shall Sanral pay them?

Says Mbuthuma: “The Department of Environment enforces the law on our communities if something happens, but it is powerless against Sanral’s activities. There is no equality before the law.”

Sanral has not followed the “Biodiversity Offset Agreement” about plants and it has not paid over R300 million to Eastern Cape Parks & Tourism Agency. They should have paid it last year, and then in February and then in March. The payment is now “imminent”, again.

Sanral’s McLahlan stated that Sanral has requested DMR to make sand mining legal in the Eastern Cape. The immediate reason seems to be the needs of N2 ‘Green Route’.

Mbuthuma: “In the communities, we see no capacity or will from authorities to impose law or restrictions on sand mining. Legalised sand mining means the end of the Wild Coast as we know it.” 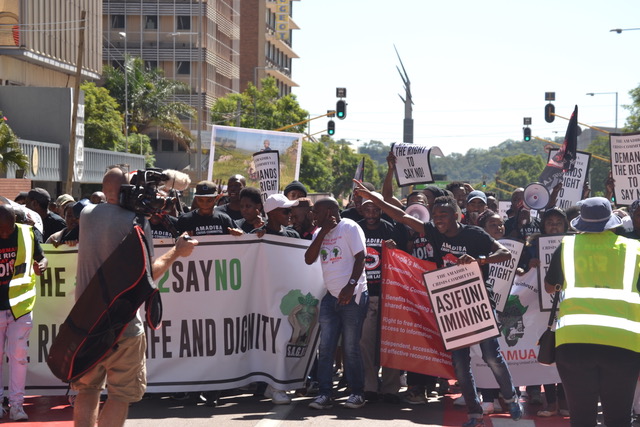 ACC comrades mobilize to say no to mining at a recent court case held in Pretoria.

The Go Ahead of the Minister of Environment started a steam roller with no breaks. “Nobody has managed to interdict Sanral since 2010”, boasted project leader McLahlan. In other words, Sanral can break the environmental laws as much as they like. They will do what they want until they are interdicted.

Conflicts are bubbling everywhere in Pondoland along the “Green Route”. At the EMC meeting, conflicts were reflected in the phrase “Not much work has been done”.

The Australian mining company MRC says in the 2017 annual report that the start of the N2 on the Wild Coast has “enhanced the viability” of the ‘Xolobeni Mining Project’. The N2 is planned to enter Sigidi and Mdatya villages in Amadiba 3km from the coast line.

The 15 May  EMC meeting showed that Government departments and agencies are paralysed and unable to handle Sanral.

Sanral is in substantial non-compliance with its Environmental Authorisation for the N2 Toll Road on the Wild Coast. Amadiba Crisis Committee will detail this in a second media release.