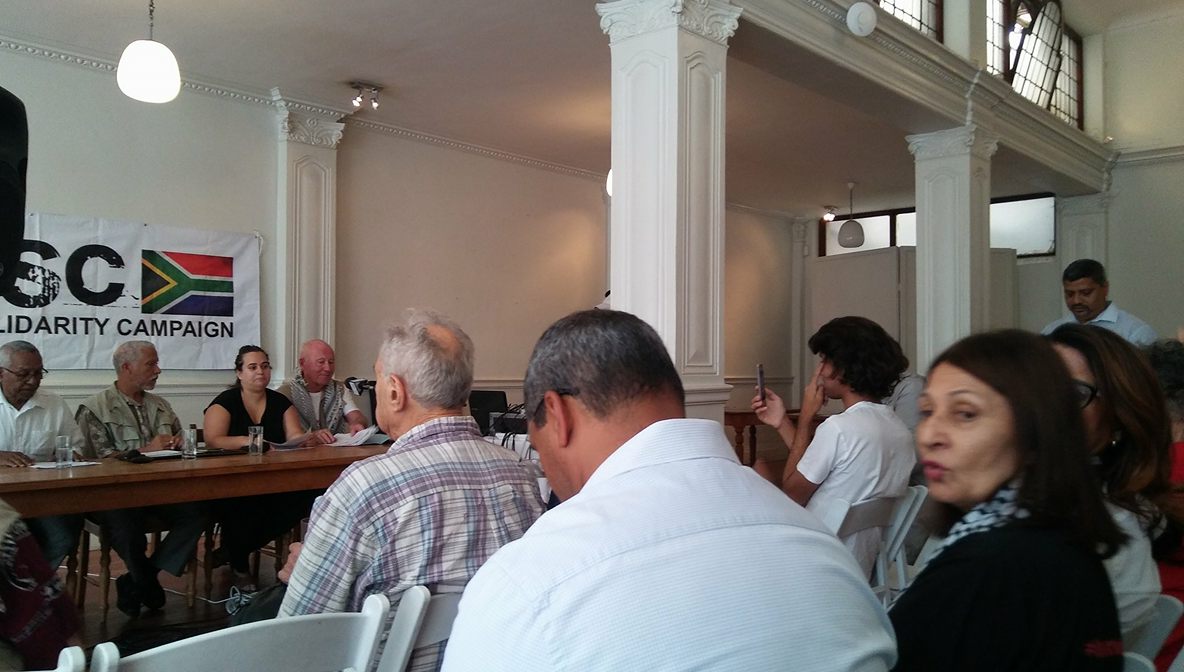 The Israel Apartheid State continues to openly disregard it obligations to protect children from excessively harsh criminal punishments under international Human Rights law. Ahed Tamimi, detained for being accused of aggravated assault after slapping a soldier, will be spending her 17th birthday in an Israeli prison. She is not the only child who finds herself arrested by the Israeli Apartheid State. Yesterday (31 January 2018), the Palestinian Solidarity Campaign (PSC) hosted a press conference to expose the crimes against humanity carried out by the Israeli government, and further to pledge solidarity with Tamimi and all other Palestinian children suffering under the oppressive and violent Israel state.

A panel of activists (including Alex Hotz – student activist, ex-banker and arms deal activist – Terry Crawford-Brown, former Robben Island prisoner – Marcus Solomons, former chairperson of the Western Cape Council of Churches – Lionel Louw and Igshaan Amlay – who was part of the Wynberg 7 – a group of teenagers arrested under the South African apartheid government) made statements and reflected on the current situation in the West Bank.

The Palestinian Ambassador – H.E Hashem Dajani, was invited to speak as well. In a letter the Ambassador expressed his regret at not being able to attend the press conference. Also mentioned in the letter was that 490 people have been arrested in just over a month. Nearly a third of the arrests were children. All of whom, including Tamimi, simply want a life free from occupation and violence.

Lionel Louw reflected on his recent visit to Palestine. He pointed out, how he witnessed a system of apartheid being implemented on grand scale. They even have there own versions of the Group Areas Act and the Pass laws, he said. Worse still, he mentioned the trauma experienced by children suffering in jail, and the psychological harm inflicted on them by the Israeli Military Courts.

Louw indicated that often children were detained by the Israel Defence Force (IDF) without any basis, as a means to intimidate them and their families. Amlay was detained and tortured by the Apartheid South African government, when he was 16 years old, said that he can relate to what Tamimi is experiencing and drew parallels between what is happening in Palestine and what happened in Apartheid South Africa.

Except, today we do not see the same level of international solidarity demanding the end of the Israel Apartheid State.

Marcus Solomons condemned Israel for having virtually ignored every single United Nations Human Rights resolution and demanded that the Israeli state respect the rights of all children and Palestinians. Solomons argued that it is essential to build a strong international movement that can put pressure on the Israeli Apartheid state in light of their refusal to stop violating human rights.

Some of the demands included that:

Israel must be held to account under international human rights law. Please support the campaign against the Israel Apartheid State and sign the petition for the immediate release of Ahed Tamimi and all other political prisoners.

I will end with Solomons apt conclusion “The bravery and fearlessness of Ahed Tamimi and the many other Palestinian children in their struggle for justice and in the face of Israeli state brutality, therefore needs our collective admiration and support”.