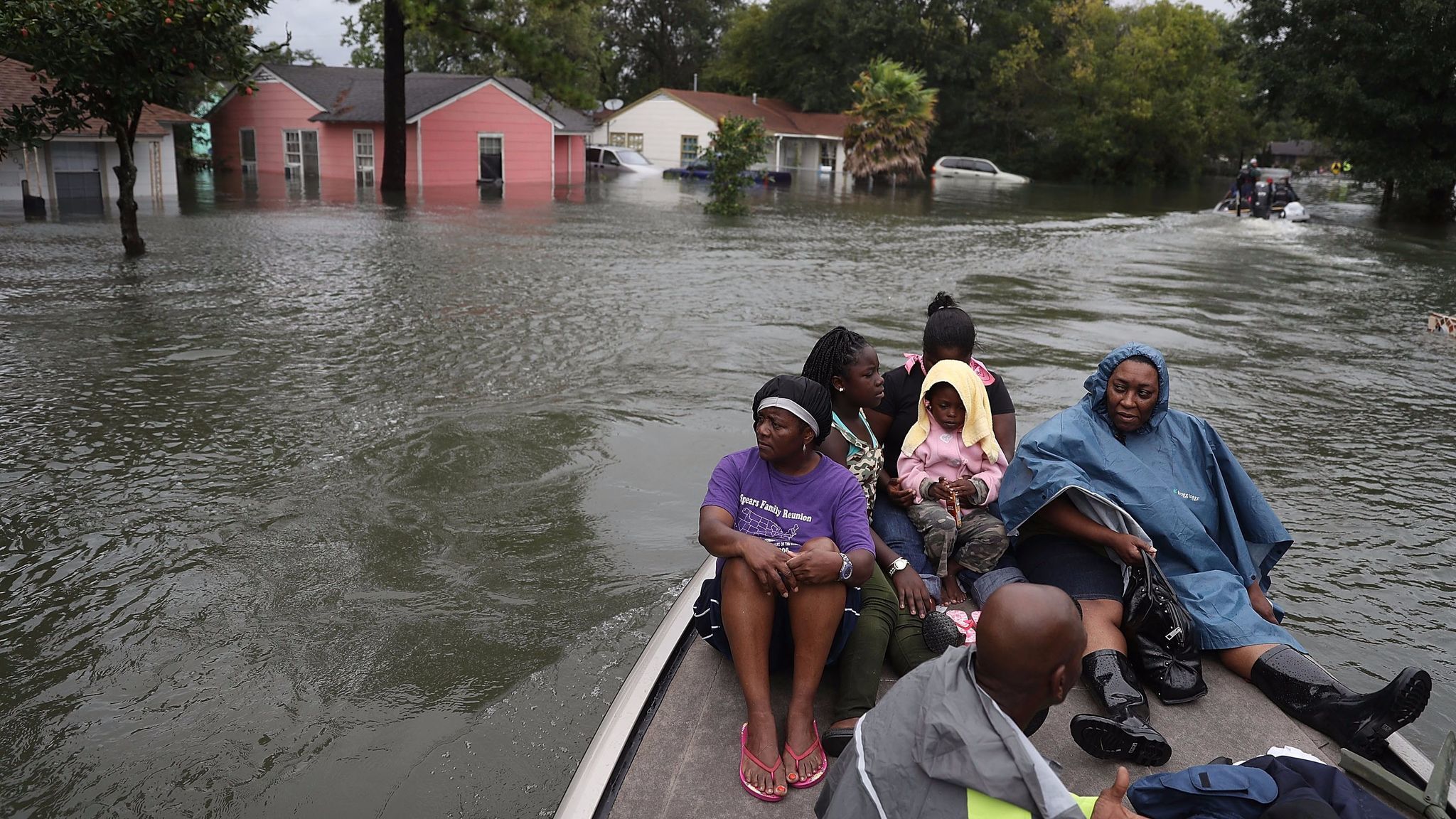 The devastation caused by Hurricane Harvey

Lies, damn lies and statistics, right? Well not always – sometimes statistics dramatise social reality in a graphic way. A year before the devastating floods in India, Bangladesh and Texas, a little-noticed UN report revealed extraordinary figures about the effects of climate change worldwide. Climate-related catastrophe is now not just an additional hazard for the world’s poor, but a central factor in their oppression and poverty. And this will eventually lead to a cascade of millions of climate change refugees, a process already starting.

This is not universally recognized. One much-visited socialist website recently published an insightful article on how the poor had been left to bear the brunt of the flooding in Houston, which however failed to mention the words “climate change” or “global warming.”

The UN report and events worldwide this year point to a number of increasingly self-evident conclusions, although these are not accepted by the climate change deniers on the political right:

The UN’s Human Cost of Weather Related Disasters, which covers the period 1995-2015, shows that in total, 6,457 weather-related disasters were recorded worldwide this period; these events claimed an astonishing 606,000 lives, an average of some 30,000 each year, with an additional 4.1 billion people injured, left homeless or in need of emergency assistance.

In other words, a significant majority of the world’s population have suffered severe negative consequences as a result of weather-related disasters. Of the 606,000 deaths, 202,000 are put down to storms and a further 157,000 directly to flooding.

In rural India, the report explains, children in households exposed to recurrent flooding have been found to be more stunted and underweight than those living in non-flooded villages. Children exposed to floods in their first year of life also suffered the highest levels of chronic malnutrition due to lost agricultural production and interrupted food supplies. 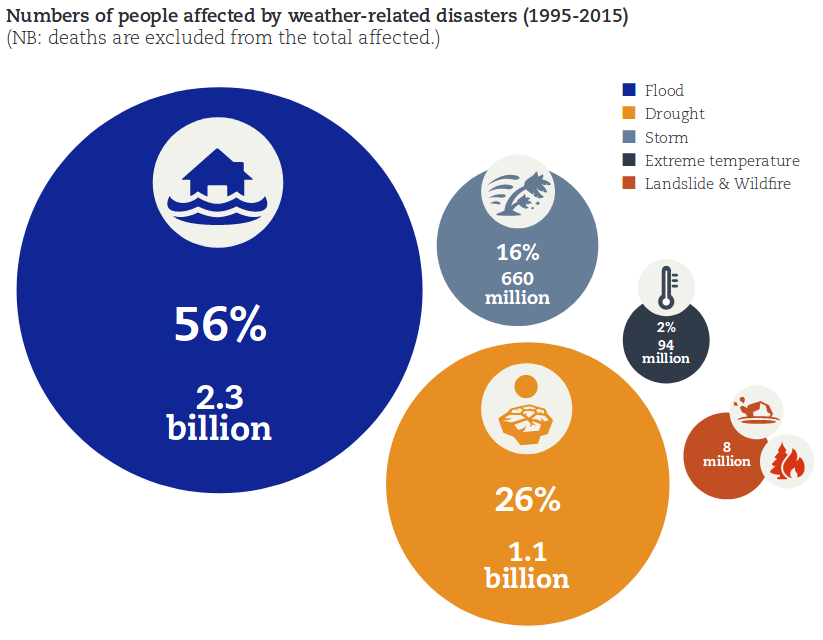 A report from West Bengal on the recent India/Bangladesh flooding shows how the poor in the less-developed countries fails to cope with climate catastrophe. Aditi Roy Ghatak says:

“Comparisons are largely redundant against such overwhelming tragedy, but the discrepancy between the number of lives lost here and in the U.S. is telling. The developing world remains profoundly exposed in the face extreme weather; extreme weather that is predicted to become ever more frequent as climate change advances. In the coincidence of these two disasters, we have the starkest articulation thus far of the UN climate science panel’s prediction that climate change will be disproportionately suffered by the poor world.

“This happens for many reasons, but at its heart it is about poverty and governance. India’s National Disaster Management Authority’s budgeted expenditure in 2016-17 was $100m. In the U.S., a country with one-quarter the population of India, the Federal Emergency Management Agency budget for 2016 was $15.5bn. In South Asia, storms regularly kill dozens of people. When a big flood comes people die in their thousands.”

The article explains how the local water management infrastructure is hopelessly inadequate, but that the response of the local and national state is hopeless. A local teacher explained:

“There were very few rescue boats; there was no water nor water tankers; there was little evidence of disaster management teams that one hears about. Only non-government organizations came with food, medicines and other relief material.”

Repeated flooding is making some poorer area uninhabitable. Nowhere is this more true than in Bangladesh. According to Gardiner Harris:

“River deltas around the globe are particularly vulnerable to the effects of rising seas, and wealthier cities like London, Venice and New Orleans also face uncertain futures. But it is the poorest countries with the biggest populations that will be hit hardest, and none more so than Bangladesh, one of the most densely populated nations in the world. In the Ganges Delta, made up of 230 major rivers and streams, 160 million people live in a place one-fifth the size of France and as flat as chapati, the bread served at almost every meal.”

Parts of Bangladesh are already uninhabitable and it is too late to reverse this trend.

“Though Bangladesh has contributed little to industrial air pollution, other kinds of environmental degradation have left it especially vulnerable.

“Bangladesh relies almost entirely on groundwater for drinking supplies because the rivers are so polluted. The resultant pumping causes the land to settle. So as sea levels are rising, Bangladesh’s cities are sinking, increasing the risks of flooding. Poorly constructed sea walls compound the problem.

“The country’s climate scientists and politicians have come to agree that by 2050, rising sea levels will inundate some 17 percent of the land and displace about 18 million people…

“Bangladeshis have already started to move away from the lowest-lying villages in the river deltas of the Bay of Bengal, scientists in Bangladesh say. People move for many reasons, and urbanization is increasing across South Asia, but rising tides are a big factor. Dr. Rahman’s research group has made a rough estimate from small surveys that as many as 1.5 million of the five million slum inhabitants in Dhaka, the capital, moved from villages near the Bay of Bengal.”

The crisis in the Ganges Delta will have major social effects. It is estimated that 1.5 million of the 5 million inhabitants of the slums of Bangladeshi capital Dacca have fled from the delta. It is also projected that if rising sea levels continue as expected, 50 million Bangladeshis will leave the country by 2050. In other words, they will become climate change refugees.

Nearly all tourists to the Mediterranean holiday centres like Spain, Portugal, Italy and the South of France report that temperatures make staying outside impossible for much of the day. The whole Med has seen temperatures above 40 degrees this year, and this has been accompanied by widespread wildfires.

This year (2017) has seen particularly disastrous fires in Portugal, where 70 people were killed by a giant fire in the centre of the country in June. In fact in the more advanced countries there are many more deaths from wild fires than from floods.

“The number of forest fires in the EU has nearly trebled so far this year, according to figures obtained by Euronews, affecting an area close to twice the size of Luxembourg. There have been 1,068 blazes in 2017 – a huge increase on the 404 the bloc saw annually on average over the previous eight years.

“Experts have blamed climate change for the rise, saying it has extended the traditional wildfire season and increased the frequency of blazes. They have warned Europe’s forest fires will rage more often in the future and engulf new areas.”

Europe is far from the only area to see a major extension of wildfires. At the time of writing (September 2017) a state of emergency has been declared in Los Angeles and a plume of smoke from wildfires hangs over much of California. [Ed.: Over 90 uncontrolled fires in Canada, as of August 30, according to Canadian Wildland Fire Information System.] High temperatures are responsible and local journalist Patrick May reported:

“Triple-digit temperatures barreled through the Bay Area this weekend with an unseasonable gusto, tying or breaking records from Santa Rosa to Livermore, leaving just San Francisco and the coast as relatively balmy oases from the heat searing the rest of the region on Sunday… After Santa Rosa suffered on Saturday through a historically high 102 degrees, besting the previous record of 100 hit back in 1988, and spots in the Tri-Valley seeing highs of 105, Sunday saw Santa Rosa hit 100, falling just short of a 2008 high of 101, while Livermore hit 107, just shy of a 1944 high of 109.”

Of course the poor are usually the victims of climate change in advanced countries as well. This was amply illustrated by the 2005 Katrina hurricane that swamped New Orleans. The same holds true of hurricane Harvey in Houston and surrounding areas. As Wen Stephenson put it:

“Decades of neglect, inequality, and disenfranchisement – to say nothing of heedless development and a lack of flood planning tantamount to criminal negligence – mean that Houstonians of all backgrounds, but especially the poorest and most vulnerable communities, primarily communities of color, have been left utterly undefended.”

“Just as Houston’s catastrophe mustn’t be viewed in isolation, as merely another extreme weather event, it’s time to acknowledge that our climate reality has shifted – and that it’s time for the climate fight to shift with it. I mean the shift from a world in which we struggle to prevent climate catastrophe to the world we live in now, the one where we’re actually forced to live, or struggle to live, through it – the poor and marginalized struggling hardest of all. As the climate emergency converges with our national political emergency, nothing illustrates this shift more clearly, in this country, than Houston. The fights for equality and for democracy, so immediate and pressing in these dark times, are not separate from the fight for climate justice – because we’ll never have the latter without the former.” •

Phil Hearse is editor of www.marxsite.com where this article first appeared. Also published by Left Unity.