Fighting back against repression:CSAAWU organises on the farms of the Western Cape

After the 2012 strike in the Western Cape, farmworkers’ organisations have organised themselves into an umbrella group – and they have experienced a backlash from employers. Amandla! interviewed Karel Swart, Deputy General Secretary of the Commercial, Stevedoring, Agricultural and Allied Workers Union (CSAAWU).

Amandla (A!): For those readers who don’t know CSAAWU, tell me what the union is and where it comes from.

Karel Swart (KS): We decided about 12 years ago that there was a need to build a union on the farms. I was born and grew up on the farms. We experienced the hardships and horrific conditions that farm workers and farm dwellers experience on a daily basis, and that motivated us to build CSAAWU . The union was finally launched and registered in 2007.

A!: Is the union only organising in the farms, or does it organise in other industries as well?

KS: We believe that we have to organise the entire agricultural sector and the entire food chain; we cannot organise in the old ways where you only focus on one area. Then if one day there is action you can call everyone to be part of the action. That is our vision. Currently we organise mainly agricultural workers and we also organise general workers. We are not yet in the stevedoring area. We are not even organised in the entire Western Cape.
This is a very difficult sector to organise. You have to ride from one area to another. Today you address 20 workers on the farm. Most of the farms are currently between 30 and 40 workers. You don’t get the huge farms with hundreds of workers any longer. So it takes time, and it drains our resources.
But we have a strategy. Each area elects a chairperson who is responsible for the area. The area might have 25 or 30 farms. The chairperson is responsible, with the support of the shop stewards, Fighting back against repression: CSAAWU organises on the farms of the Western Cape to recruit in the area. To make life easier for workers to reach other farms, we have also launched the Bicycle Campaign. And as we speak, we are getting a lot of new membership forms – so this approach is starting to deliver some kind of result.
And we use SMS s to communicate. We communicate with members so that they are aware of meetings. And they communicate with us about abuses on the farms. So this SMS is a very effective vehicle to keep everybody well informed. It is a very powerful tool. 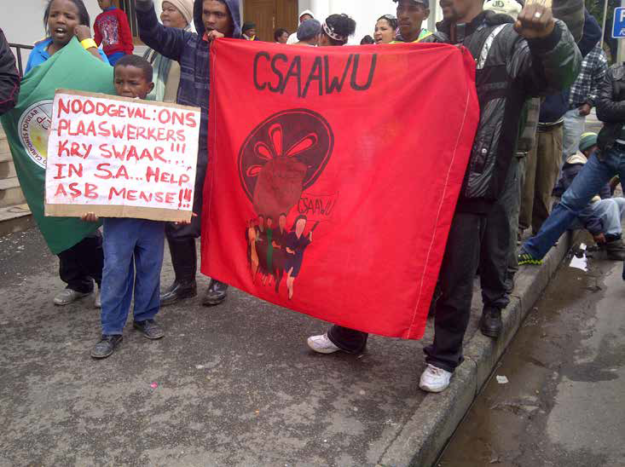 A!: Roughly how many members does CSAAWU have?

KS: Currently CSAAWU represents about 1,600 permanent workers. We have been through a most difficult period. We took farmers to the Labour Court and we lost. And costs were awarded against us. We appealed in the Labour Appeal Court, and we lost again. And then we took the matter to the Constitutional Court, and we lost again. This kind of thing is basically draining the workers. There was a feeling that it takes too long. After the 2012 uprising, the farmers retaliated. They took away facilities that our members had: transport for children and to transport you to town; money for Christmas clothes and Christmas hampers. So some members resigned.
If it was not for the intimidations from the farmers, our union would be a very strong and effective union.

A!: As a result of that strike, wages went up from R69 a day to R105 a day. So that was a victory. Did that not encourage people to think that it is a good thing to join unions? 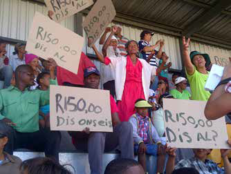 KS: There was kind of a warm feeling. I was in the battlefields, and I could see the excitement. Workers stopped vehicle movement… It was a real revolution. And that gives workers some confidence, and it raised the consciousness of the workers. And to receive a 52% increase has made history.
But the farmers knew that they had to clamp down. They could not allow the consciousness of the workers to increase. They knew workers will then ask for more; not even for 52%, but towards 100%. And then workers will demand other things; workers will demand land.
So they retaliated. They took back the 52%. They increased the rent. Then they increased the price of electricity and transport. Normally the farmers transport the workers on a weekly basis to the town. They took this away, and the workers must take a taxi. And they increased the prices in the farm shops. So when you add all these costs up, some workers then drew the conclusion.

A!: And yet, if I understand correctly, many farm workers have actually contributed some of their wages to paying the legal fees you owe as a result of those cases. So there are farm workers who see the benefit of a union.

KS: They saw that we are standing with the workers. When the farmers started to institute disciplinary action, we were there with the workers. When they took the matter to the CCMA [Commission for Conciliation, Mediation and Arbitration], CSAAWU was there with the workers, right up to the Constitutional Court. So the workers can see the consistency of this union.
We owed more than R600,000. We received donations from civil society, from unions in Europe. As a result, we have been able to pay R400,000. We must pay another R100,000 in September and again in October and then the rest is due in November.
As we currently speak, workers are instructing the union to make a stop order so that they can contribute an additional R5 on top of their R10 subs. We have better-paid workers in a cheese factory in Ladismith. They have instructed the union to make a R50 stop order deduction. Those workers are paying R43 per month, and they are now prepared to give another R50 and up until the end of the year to contribute towards saving the union.
We have also engaged with AMCU under the leadership of Joseph Mathunjwa. He has said that he will go to the Central Executive Committee of AMCU, asking them to support us. He said it will not be in the interests of justice to close down the office of CSAAWU . That will be a serious setback for the farm workers, the farm dwellers and the entire food chain.

A!: I wonder what lessons you feel you and the union have learned from the experience.

KS: Workers learn in the battle how these courts are. Workers were putting high hopes into the legal system. Then the workers were very disappointed that the legal system is not there to support them. The legal system’s role is to support those people with power and with money.
We must agitate for a new Labour Relations regime in the Agriculture Sector. You cannot talk about equality before the law. Where you are sitting there are very powerful agricultural captains of the industry, very powerful and wealthy people, getting the best legal advice. And on the other side, you are sitting with very poor people who do not even know the law. There is no sympathy for those people.
So you need a transitional period where you invest in the farm workers’ organisation, to strengthen organisation, to strengthen the poor; to bring the poor at least on the same level where the farmers are. This current law does not deal effectively with the magnitude of intimidations and victimisations and evictions on the farms. More than 1.7 million farm workers and farm dwellers have been evicted from the farms. So where is the law? The law does not work. This law is not protecting the people. So we need a new law.

A!: Are there other unions organising in the sector?

KS: Yes, there are. There is now what you call the Agricultural Workers Empowerment Trade Union Council (AWETUC), which consists of about nine unions. It was formed after the 2012 strike. Altogether, the unions have about 30,000 members. We are building AWETUC as one umbrella so that we have a collective approach on how to deal with the powerful Agri-Western Cape or Agri-South Africa. The General Secretary of AWETUC is also the General Secretary of CSAAWU .
We believe that the way forward is to strengthen our ability and power by involving workers in taking up campaigns through AWETUC. We are putting pressure on AWETUC to lead the workers.