Feminisms of the Left – and socialist feminists 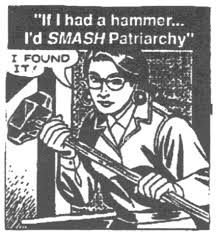 I like our panel’s title: “Feminisms of the Left.” There is a long and confusing collection of names for those who are both leftists and feminists: Marxist feminist, socialist feminist, materialist feminist, black feminist, feminist socialist, anarcho-feminist, and so on. And straddling the line between socialist and liberal feminists would be social-welfare feminists. In the 1960s and 1970s, in the heyday of the women’s liberation movement, when “feminism” was too tame a word, the mainstream feminists were social-welfare feminists. They supported abortion rights of course, and equal pay for equal work, as do all feminists, but they also supported public child care and welfare. Gloria Steinem and Ms. magazine are examples. But the movement declined just as so many activists were moving into careers and families; American politics was moving rightward, into neoliberalism, and this general trend took mainstream feminism with it. So instead of collective social provision, we heard about individual responsibility and self-sufficiency. The Clintons’ welfare “reform” exemplifies this change—and Gloria Steinem’s support for Hillary Clinton, despite all that Clinton has done against the interests of the majority of women in the world, is a sad example of the rightward evolution of mainstream feminists.

There are still social-welfare feminists, of course, who should be included on the continuum of “feminists of the left,” though they are less explicitly anti-capitalist than the rest. Personally, though I am a Marxist, I usually choose the label “socialist feminist” to describe myself just because it is the most inclusive and is less likely to be misunderstood. As I define the term, all socialist feminists (whether they would identify with the label or not) see class as central to women’s lives, yet at the same time none would reduce sex or race oppression to economic exploitation. All socialist-feminist politics have an anti-capitalist edge, not merely anti-neoliberal capitalism. Parenthetically, as with any continuum, it is not always clear how to draw the lines. For example, Iris Young, whom I knew for decades, saw herself as a socialist feminist, as do I, but is included as a liberal feminist in an encyclopedia entry

Which word we choose to identify ourselves largely depends I think on the political context we’re in, and the debates in which we’re involved, as well as how we understand these categories. So the same label may not mean the same analysis, and different labels may not mean different analyses. For example, Margaret Benston was one of the first Marxists to analyze women’s domestic labor, back in 1969. She considered herself a Marxist, used Marxist categories, wrote in Monthly Review, and is described as a Marxist feminist, but in fact her analysis was more like that of feminists who were calling themselves “socialist feminist” in order to distinguish themselves from Marxists. Hilary Wainwright calls herself a feminist socialist rather than a socialist feminist to signal her interest in bringing insights from feminism into the socialist movement and into visions of socialism. She’s been arguing this since the 1970s and recently expressed her frustration that she still has to make the same argument.

Sometimes these different labels do signal different theoretical analyses of women’s oppression and capitalism—in particular, whether you believe that capitalism and patriarchy are two distinct, though intersecting, systems—or three, to accommodate racism as well. Or, alternatively, if you believe that we live in one system, capitalism, that has various kinds of oppression, including sexism and racism, as constituent aspects of that system. But I have found over the years that these abstract differences don’t necessarily entail political differences, which are most important for social transformation.

Feminists of the left are involved in all kinds of struggles, not only those that are explicitly gendered. In some contexts one sort of issue may predominate, and rightly so, in others a different one. For example, women involved in Black Lives Matter organized Black Women’s Lives Matter because women had been left out of the picture. Given the realities of black women’s lives, black feminist theory is less likely to omit class issues than white feminist theory.

What defines socialist feminists is both the politics they articulate and the way they organize themselves and articulate those politics. It goes without saying that we support all struggles for women’s legal rights, but that is far from enough. Gender inequalities today are significantly less than class inequalities, as two recent sex-discrimination lawsuits reveal. In one, a woman who sold bonds at Morgan Stanley sued because her salary of over a million dollars a year was much lower than her male colleagues’; women at Walmart sued because their annual salary was $1,100 lower than the men’s, but the average pay for all Walmart employees is only $10 an hour. So the men’s salaries are pretty damned low too! And non-union Walmart is now the largest private employer in the United States—versus unionized General Motors not so long ago. It’s the struggles of working class women that socialist feminists focus on, whether the struggles are on the job, in the community, or wherever. Working class women’s struggles around the world exemplify certain core principles of socialist feminism, as Johanna Brenner and I discussed in the Socialist Register of 2012.

A core principle of socialist feminism is self-organization, the idea that, in Eleanor Marx’s words, women’s emancipation must come from themselves. But at the same time, they can’t do it alone, but only in coalition with others, so socialist feminists work to build inclusive movements, connecting workplace and community, waged and unwaged work, and caring labor recognized as labor. An excellent model of labor-community organizing is the Chicago Teachers Union work uniting the interests of teachers and parents. Public employees combining with those they serve is a huge step forward, something we’ve never heard from New York teachers. Similarly, I would like to see the transit workers unions reaching out to riders about common interests, like better staffing. Hilary Wainwright has several examples like this in her book Reclaim the State (Verso, 2003).

The paradigmatic gendered struggle for legal abortion was won in 1973 with Roe v. Wade, but socialist feminists pressed to go beyond an individual right to choose to include the material and social conditions necessary for women to have a genuine choice as to whether or not to have children. The concept of reproductive rights was developed in the late 1970s by socialist feminists with prodding from women of color who wanted protection against sterilization abuse along with the social changes that would support their decision to have children: child care, maternity leave, welfare, decent medical care, housing, and education. Reproductive rights pushes toward an anti-capitalist politics because unlike legal abortion, these challenge capitalist profits. We never won these in the United States, and where they were won, neoliberalism has brought continual attacks on these benefits.

In contrast, environmental struggles do not seem gendered. What could be more universal than the need for clean air and water? But this does not mean it is not a women’s issue. Just as women’s rights are human rights, as feminists have argued, so are human rights women’s rights. Feminists should not confine themselves to issues uniquely or primarily affecting women. Moreover, there is often some gender dimension even if it’s not explicit. The UN Population Fund says that women in developing countries are particularly impacted by climate change, directly because of the difficulty of meeting their families’ needs and indirectly by the wars engendered by scarce resources. Women are often the leaders of grassroots environmental movements, which socialist feminists strongly support, as they stress that the roots of the environmental crisis lie in capitalism’s inherent drive to expand production.

Sometimes it’s important to work with others who do not share all our left feminist values. La Via Campesina—the worldwide peasants movement—took a strong position opposing violence against women, which they defined in both interpersonal and structural terms. So that is very progressive and quite different from the conservative “law and order” approach of much anti-gender-violence work. But La Via Campesina at the outset was not comfortable with issues of sexual freedom, abortion, and LGBT rights. Working together, however, with the World March of Women, their position has evolved.

The same conflict can arise in the United States when we are involved in economic struggles with people who are more conservative socially. In Chicago the movement against school closings brought together a diverse group, including gay socialist feminists and black community activists, not all of whom supported gay rights. Rather than tackle their differences directly, they worked in solidarity, recognizing that the parents should be in the leadership of the struggle. Over time, that kind of solidarity is the best way to overcome distrust and change minds.

Another way one can advance struggles from a feminist point of view is to pay attention to the structure and process of the groups in which one works. Differences of power and privilege along sex or gender lines are particularly intimate and subtle. So transforming this power requires the transformation of ourselves and our relationships—an insight associated with the women’s liberation movement. One way to address this problem is to allow—or better yet, to encourage—women’s caucuses, whether in unions, social movements, or left groups. In Occupy, despite their focus on horizontal process, the idea of separate spaces for women and people of color met some resistance, which is sad. Leftists should note that more than one hundred years ago, Marx and Luxemburg supported organizing men and women both together and separately. After the Russian Revolution when Alexandra Kollontai was in the government and women were organized independently within the Communist Party, women won all kinds of gains and prevented women’s jobs from being given automatically to returning soldiers rather than allocated according to need.

In the United States today, there is a new openness to socialism. From Occupy to Black Lives Matter to the Sanders campaign, to new labor organizing, we begin to see the possibility of a new radical left. A key strategic question for that emerging movement is whether the insights of socialist feminism will be brought into the center of its politics.

Feminisms of the Left – and socialist feminists: This essay was originally a talk at the conference held at the New School for Social Research on April 21-22, 2016.