How should we read the raging debate on land reform since Parliament’s resolution to explore constitutional amendments that may allow for the expropriation of land without compensation? What space is there for radical land and agrarian reform policy changes? What does this mean for building the power of the landless?

The motion was initially presented to the Assembly by the EFF. The ANC made substantial amendments . The National Assembly adopted the amended text.

In paragraph 6, the original EFF motion stated that “at the centre of the present crisis regarding the resolution of the land question is section 25 of the Constitution, the ‘property clause’, which protects private property rights, and requires the State to pay compensation when expropriating land in the public interest and for a public purpose.”

The ANC amended this to read that the National Assembly “recognises that the current policy instruments, including the willing buyer willing seller policy, and other provisions of section 25 of the Constitution may be hindering effective land reform.”

In addition the ANC amendment removed a sentence in the original EFF motion recognising: “that this property clause makes it practically impossible for those dispossessed of their land to get justice for injustices perpetrated against them.”

Both of these amendments effectively weaken the original EFF motion.

A further ANC amendment reaffirmed that the National Assembly“called on government to ensure that expropriation without compensation is implemented in a manner that increases agricultural production, improves food security and ensures that the land is returned to those from whom it was taken under colonialism and apartheid and undertake a process of consultation to determine the modalities of the governing party resolution.”

The amendment puts the ANC and its resolutions at the centre of the proposed process. Further, it uncritically commits the National Assembly to dominant discourses on agricultural production and food security. So current dominant economic interests will be the prime determinant in managing popular support for expropriation without compensation.

The ANC’s apparent endorsement of expropriation without compensation is part of its long-term strategy of containing contradictions. It uses radical land redistribution rhetoric whilst also sustaining inequitable, exploitative and still racialist capitalist farming. Key moments of ANC radical rhetoric include the 2005 Land Summit, the 2007 Polokwane Conference resolutions on land, the inclusion of land as a campaign platform in the 2009 and 2014 election manifestos and its 2018 endorsement of expropriation without compensation.

Throughout all these moments, ANC rhetoric is contradicted by its policy failures to undertake systematic land and agrarian reform. This is confirmed by the ANC December 2017 conference resolution which states that “we must ensure that we do not undermine future investment in the economy, or damage agricultural production and food security. Furthermore, our interventions must not cause harm to other sectors of the economy.”

Land and agrarian reform is still positioned as subordinate to the commercial farming model, and under capitalist class relations. Side by side with radical rhetoric is the sustained intensification of an elitist accumulation path of deracialisation in commercial agriculture. A radical land and agrarian reform agenda would destabilise the ANC’s commitment to secure investment for global integration.

Land reform has never been a priority

The low prioritisation of radical land reform is fundamentally shaped by two things: the weak and fragmented nature of the political voice of rural social movements, and the ANC’s commitment to neoliberal economic policy.

In 1996 the ANC government decided to deregulate and liberalise agriculture, and to subordinate land reform to the private market. This was designed to ensure levels of investment that would drive sustained capitalist growth as the basis for job creation. This is what explains the lack of change in the basic features of the accumulation regime in agriculture since 1994.

Deregulation and liberalisation wiped out a developmental state model of regulation, price controls, state support and incentives for beneficiaries of land reform. Amongst white farmers, the inefficient no longer had trade protection and state subsidies. This opened the door to a sustained process of concentration in ownership and an increase in farm sizes in the commercial agricultural sector. This was also driven by agribusiness interests that acquired ownership stakes in farm production.

The ANC resolution’s call for strong action to be taken against so-called illegal occupations effectively continues to protect existing property rights in land. It also continues the criminalisation of what would have been more transformative expropriation through occupation from below. This opens the door to a limited expropriation programme from above. The ANC fears direct popular action from below – particularly action that it does not politically control. It cannot even imagine such action as a positive contributor to shifting the balance of forces in favour of transformation. 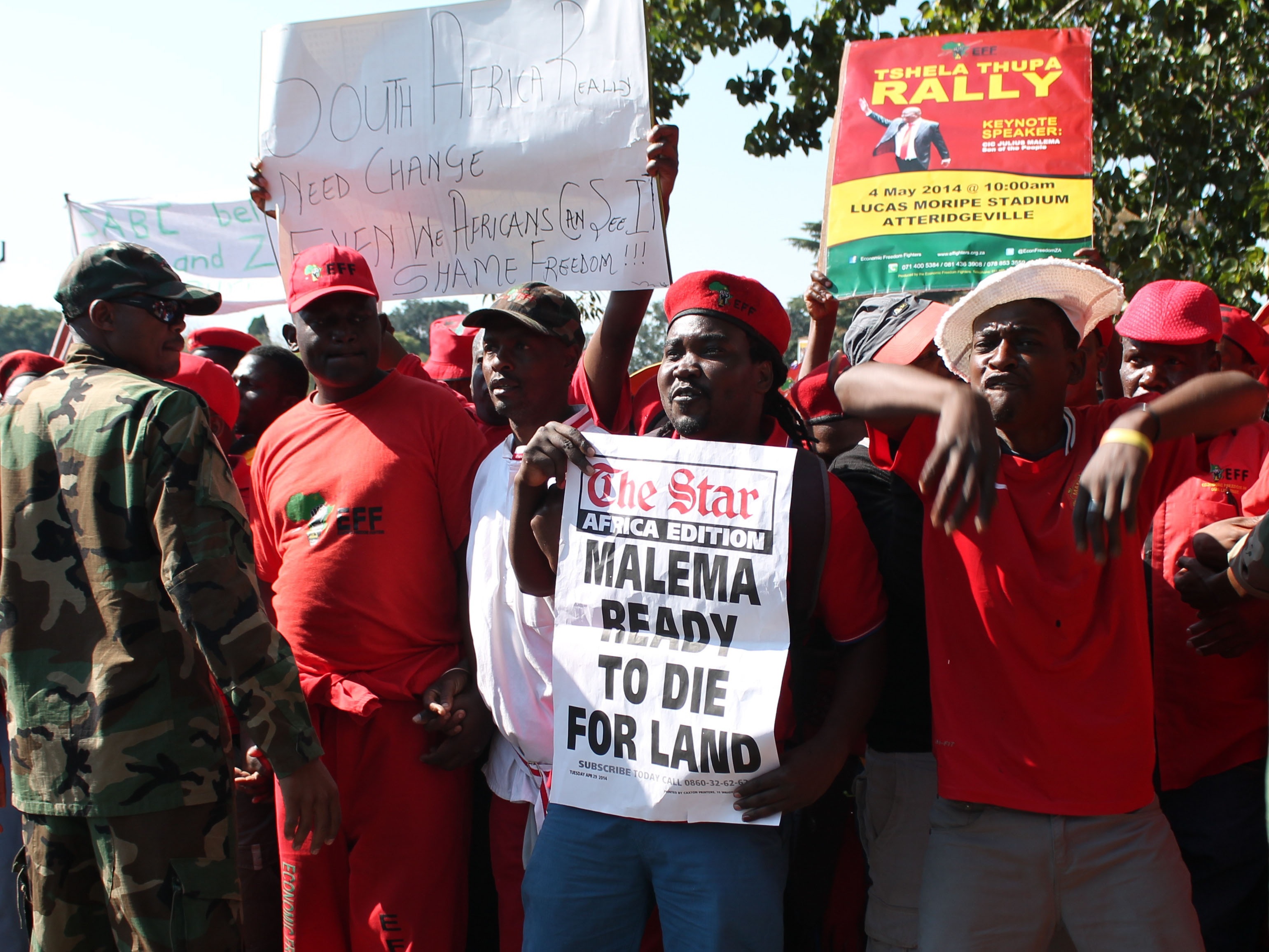 Do we need expropriation without compensation?

Yes. Whilst there is a lot of state land, a lot of the productive land is held by agrarian capital and is entrenching exploitation, oppression and accumulation by a few, whilst also generating poverty and landlessness. It is important to break this class power. It is also important to reorient land and agriculture away from the exploitative and ecologically unsustainable model we have. Of course, addressing historical land dispossession is not to be minimised or forgotten. Expropriation without compensation is critical in all of this, but not as a stand-alone. Rather as part of wider systemic change.

What would such thoroughgoing systemic change look like? We would need policy mechanisms to ring-fence resources for the poor and landless. Government must be pushed to subdivide farm holdings and to support changed, low-input land uses and production technologies. There must be substantial investment in the public institutions and human resources responsible for land and agrarian reform, and development generally.

A number of policies must be revised to make possible the creation of new settlement patterns in support of smallholder production. These include:

• The reintroduction of production subsidies and public support for input, processing and marketing co-operatives.

• The reorientation of these systems away from industrialised agriculture towards ecologically sustainable agriculture and land uses. This is consistent with justice, and has been demonstrated to result in higher levels of employment.

Whilst ANC debates and resolutions matter, we must not forget the reality of capitalist class power whose heavy hand continues to direct ANC policy, even more so in the Ramaphosa era.

Rural unemployment figures today stand somewhere between 35% and 40%. The agricultural sector shed close to 300 000 jobs in the first decade of democracy. It is this sector (landless poor rural women and men) that could be the main motive force for rural transformation. Yet “pressure from below” has not been effectively organised. The landless occupy land and undertake other forms of resistance, but these do not yet a pose a threat to vested interests.

Parliament’s passing of the expropriation resolution is a rare political moment for the landless to mobilise, organise, build their voice and impact on power. This requires a sustained strategy of struggle aimed at transforming the balance of forces and ownership patterns, and thoroughgoing structural transformation of our economy.

This will require imaginative work and a critical mass of rural activists and movements. We cannot even rely on the EFF. Building strategic alliances will be key. The apparent spike in land occupations since Parliament’s resolution is an indicator of how landless people can respond. But this must go even further given the coming public hearings: the majority of the current 160,000 submissions received by parliament are from vested landed interests.

Landless people must also come forward with their views on expropriation without compensation. Without falling for the statist romance of it, landless people must raise a number of crucial areas for the amendment of the constitution:

1. asserting the importance of democratic public power to redistribute land through expropriation,

2. challenging the imposition of legalistic court power over compensation, and also the primacy of compensation in the current Section 25 of the Constitution

3. protecting the security of tenure and land rights of the vulnerable even under expropriated land

6. restoring the social value of land

7. winning the right to occupy land and undertake other social action to ensure equitable land ownership.

None of these will be won immediately. However, it is crucial to use this moment to register them in popular consciousness as a basis for sustained struggle. It is in that kind of long-term struggle that the land question will ultimately be resolved.

Mazibuko Jara is part of the Ntinga Ntaba kaNdoda rural movement in Keiskammahoek.