The core of the South African economy has been hit by significant crises in the steel industry and across mining. Commodity prices have been in a state of collapse for the last five years, following the commodity boom that preceded the slump.

Both crises reflect the madness of the market, and of production being dependent on global market forces. Both have dire consequences for economic development in South Africa – critically jobs – and suggest more deindustrialisation is likely, instead of less. In steel, the international price has plummeted to the lowest in over a decade – about a 45% drop over the course of 2015, from $500 a tonne to about $280 a tonne. This drop in price is a consequence of “oversupply”.

The price of iron ore and coking coal – the key inputs in the production of steel – have also halved.

This crisis has not affected South Africa alone. It is a global crisis. Jobs and plants are threatened with closure in Britain, and the Conservative government there considered the renationalisation of the industry, albeit briefly.

The oversupply is a result of how the steel industry has been caught up in China’s market crash.

China produces about half of the 1.6 billion tonnes of steel made each year. The state subsidises steel production, sustaining domestic production. As the economy has slowed down, a greater part of Chinese steel has been exported. This has led many to argue that China has been dumping steel on the global market, producing a crisis for other producers and threatening mass steel closures. The boom in cheap Chinese exports is what has caused the plummeting of the price.

In South Africa, the industry came close to complete collapse, forcing the government to impose a 10% tariff on imported steel in a last ditch effort to save the industry.

But is the industry worth saving? The answer to that question must be yes. Steel is the most important feedstock into industrial development. It is second only to oil in importance. But it is hardly produced in Africa at all. Only South Africa and Egypt produce steel in any quantity on the whole continent. Construction and the auto industry are big sources of demand but public transport, roads and railways, housing, irrigation schemes, hospitals, schools, and so forth all need steel. It’s a dirty, carbon intensive industry, though producers could be far cleaner than they presently are. But there are no substitutes for steel, unlike in the energy sector where coal can be replaced by renewable energy sources.

The crisis in mining has followed the global collapse of commodity prices from their peak in 2011. The last five years has been disastrous, though mining is still South Africa’s biggest foreign currency earner.

The collapse of commodity prices, sometimes by over 50%, has led to the restructuring of many mining houses, the selling off of assets, and, of course, job losses. Anglo and Lonmin in particular have seen major job losses. Platinum has had six years of crisis. Iron ore and manganese have seen the biggest price changes. Coal export prices have halved, and nickel and gold, oil and copper have been hit hard too.

However, executive pay in mining continues to grow. For example, Nick Holland of Gold Fields received R40 million in 2015 (8.8% up on the previous year) whilst dividends fell by 19% in the same period. AngloGold’s CEO Srinivasan Venkatakrishnan got R26 million, 28% up on the year before.

Consequences of the crisis

The crisis means conflicts over jobs, not only between companies and workers but between workers, and between workers and the unemployed. This accompanies the already deep tensions between the mines and the communities of the mining areas, starved of resources like water and basic public services.

This is not just in South Africa but across all the many mining-dependent economies in Africa.

South Africa does face a specific problem, though. Many of the stronger sections of manufacturing developed to supply machinery and equipment, critical inputs into the mining sector. So they are dependent on mining for demand. A crisis in mining thus quickly becomes a crisis for manufacturing sectors like metals and metal products.

So the mining and the steel crises are crises in the core of the economy, in the core of what Ben Fine and Zavareh Rustomjee have called the “Minerals-Energy Complex”.

The South African state established the Iron and Steel Industrial Corporation, ISCOR , in 1928. Its purpose was to use South Africa’s iron ore to ensure a supply of cheap steel to industry and to develop industrialisation and generate employment (for whites.) It was developed alongside Eskom’s provision of cheap coal-based electricity to the mines and other industry, and later SASOL ’s oil from coal and polymers for plastics. They formed a capital-intensive core of the economy. State-owned enterprises played a key role. They were intertwined with the mining industry, and they rested on cheap, black labour. 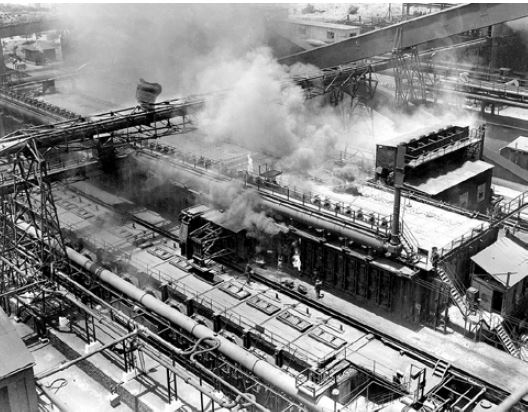 ISCOR was privatised in 1989, one of the cruel last acts of the apartheid regime. It eventually became part of ArcelorMittal – the biggest steel producer in the world. There was a state-owned steel industry which could now be used to help diversify industry and the economy generally, to generate jobs for the black majority, and to help in meeting basic needs (houses, hospitals, school etc.). Instead, we have a private monopoly which hits downstream industries by charging them import parity prices. They add on transport costs so that local buyers pay the same price for steel produced locally as the price they would pay if it came from oversees. This can add as much as 35% above international prices, once these imaginary transport costs have been added on. On top of this, the South African operations of ArcelorMittal were used to subsidise its operations elsewhere in the world.

So the once-nationalized industry in the MEC core of the economy became a barrier to industrial development in the post-apartheid era by squeezing downstream manufacturing. Now it needs to be rescued because of the global crisis! Across the post-apartheid period, what we see is that there was no diversification out of the MEC core of minerals and energy or building up a labour intensive manufacturing sectors. Instead, the labour intensive sectors were first hit by trade liberalisation, and now the MEC core itself is being hit by de-industrialisation.

Global oversupp ly of steel is likely to continue. The impact on the South African economy will continue to be dire. And yet South Africa has high grade iron ore, it has steel making knowledge and capacities, there is vast need for the industries’ products, priced radically differently from how they have been over the last 20 years. And whilst the price of electricity is no longer as cheap as it was, electricity remains relatively cheap. This surely points to the necessity for a state steel company and the renationalisation of the steel industry.

Likewise, to rebuild the industrial base of the economy, we should be debating renationalising SASOL and polymer production. They are the basis of key inputs into plastic goods. Like ArcelorMittal, SASOL has been abusing its monopoly position with monopoly prices that hit downstream industries. And surely now is the time to revisit the nationalisation of the mines debate. Think how cheap it would be, given the erosion in the value of the mining companies. What we can be sure of is this: the further de-industrialisation of the core of the South African economy helps no one.

Sam Ashman is Associate Professor in the Department of Economics and Econometrics at the University of Johannesburg. She is the director of the university’s MPhil programme in Industrial Policy.