Addressing the opening of the House of Traditional Leaders in Parliament in February, President Zuma spoke passionately about the land question in South Africa. He said that political parties representing mainly black people should never argue about the need for radical economic transformation. And at the centre of that transformation is the return of land back to black people. He argued this, of course, after the African National Congress in Parliament had shot down a motion by the Economic Freedom Fighters for a constitutional amendment to Section 25 of the Constitution to allow for land expropriation without compensation.

Mr Zuma is well aware that 23 years of ANC rule have managed to transfer only about 8% of the land back to black people, at astronomical costs to the National Treasury. But what do Zuma and his group in the ANC mean by radical land reform?

The mainstream debate on the land question is drowned in a large number of liberal narratives, using various scarecrows to defocus us from what in South Africa is the central issue.

• The first of these narratives is the warning by liberal white intellectuals and lazy black thinkers that radical land reform will bring calamity of Zimbabwean proportions to this country, leading to more impoverishment than social and economic emancipation of the very people land reform ought to emancipate.

• Secondly, they argue, as Jackson Mthembu and his ANC caucus did, that the Constitution is an enabler for land reform, not an impediment, and that tampering with the Constitution will lead to anarchy.

• Thirdly, and more absurdly, is the argument advanced by Terror Lekota and the white right wing, questioning even the validity of land dispossession as a factor in the debate on land reform.

To avoid further confusion over how we approach the land question, we need to ask why we need land reform and how we carry it out.

Why we need land reform: I think a large section of the South African population, apart from a few people like Lekota and Steve Hofmeyer, recognize that land dispossession was a great injustice done to black people in this country. It set in motion most of the social ills we now have: problems of inequality, differential access to good quality education and to jobs, as well as the gendered dynamics in our socioeconomy.

So, the land question is in this sense about restorative justice, not merely redistributive justice. Land was taken, and it must now be returned. The manner of reform therefore, must consider this fact of historical injustice.

How to carry out land reform: Taking this imperative for land reform into account, most people have acknowledged that land reform since 1994 has not worked in South Africa. This is because of the overbearingly legalistic manner in which land reform has been conceptualised since 1994. Of utmost importance here is the constitutional protection of private property rights, guaranteed by Section 25 of the Constitution, the so-called property clause. The property clause is the most schizophrenic section of the Constitution, and is indicative of the general state of confusion bedeviling the ANC on matters of redress, and recently, on matters relating to their so-called radical economic transformation. 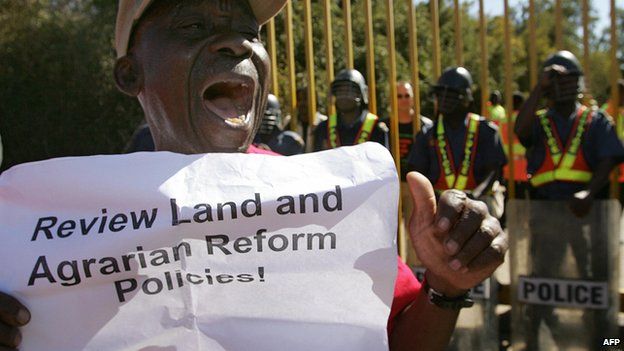 Section 25 (1) guarantees the inviolability of private property rights,  most of which are a direct product of colonial and apartheid dispossession.

• Section 25 (2) does provide for the State to expropriate land for land reform purposes, but unambiguously obliges the State to pay compensation.

• Section 25 (3) requires the compensation to be “just and fair”. It must be calculated taking a number of factors into account; they include the current use of the property, history of acquisition, the market value of the property, extent of direct state investment and subsidy previously received.

I argue, as many others do, that this section of the constitution provides for two irreconcilable imperatives. On the one hand, it provides a constitutional commitment to land reform. It recognises in the preamble and to a limited extent in Section 25 (7), that current rights to property are a result of a systemic and systematic process of race-based dispossession.

Professor Lungisile Ntsebeza provided a nice rebuttal of the Property Clause in his paper “Land Redistribution in South Africa: The Property Clause Revisited”. He questions whether radical land reform is possible within the current constitutional framework. He argues that, of the factors that need to be taken to account when compensation for expropriation is concerned, only the market value is quantifiable.

A more comprehensive rebuttal however is provided by Professor Fred Hendricks. He criticises Ntsebeza for acceding to Ruth Hall’s argument. She says that perhaps land reform could be pursued more radically without changing the constitution. She believes that the Constitution provides for radical land reform. Hendricks argues that “the adoption of the willing buyer willing seller model for land reform was not an aberration at all; it rests very comfortably with the Constitution, especially with respect to its provisions for compensation”.

Radical land reform therefore is and can only be found outside of the current constitutional framework. Private property rights, and the requirement that the State pay for land reform, are anathemas to comprehensive land reform. This is what makes a constitutional amendment to Section 25 of the constitution critical. Without that amendment, we basically have no land reform programme, but a massive land purchase programme.

Lastly, there is a wide-spread misconception that agricultural land is all that land reform should be concerned with. This misses the point on the multiple layers of the land question in South Africa. For the purposes of this article, I highlight just three, and these are:

The former reserves: these are inhabited by approximately 17 million people. There is a very strange land tenure arrangement. Land in those areas is legally owned by the State, but administered, with impunity, by traditional leaders, without any accountability. Land allocations are done through systems of patronage, and women are mostly denied opportunities to access land. Radical land reform would have to take away control of land from these feudal lords and give it over to democratic citizen based land committees.

The urban areas: no attempt has been made to restructure in any significant way apartheid architecture, which has condemned black people to overcrowded, rat infested and flea-ridden squatter camps called the townships. A radical land reform programme must expropriate in secluded areas, which have been enclaves of white elites. This will make land available even in city centres for low cost housing for the majority.

Commercial agriculture: much has been made of the nature and structure of the agrarian economy in this country. It is made up of about 37,000 commercial farmers, producing about 90% of the food. These are then complemented by subsistence farmers, found mostly in the former reserves. They contribute about 10% of our food. Of the commercial farmers, only 20% are considered productive, and 5% are producing about 70% of our food. Of course, the majority of these farmers are white.

These farmers feed into corporate retail sales, which in return have stringent requirements for the control of plant diseases. These requirements close off access to this market for small scale farmers who cannot meet them. As a result, former cooperatives such as SENWES , AFGRI and NW K control about 74% of maize handling and storage capacity in the country. This is but a tip of the iceberg. It shows how a few people have consolidated control over our agrarian economy over time.

Radical land reform must be able to dismantle these systems of control. It is more than just the question of land, primary as that may be. It is essentially about restructuring the nature of our economy, of our geography and of our society as a whole. More fundamentally, the land question is about the creation of a new society based on values of humanity and freedom.

Without land, there is no freedom. Because the ANC has prevaricated for over 23 years on addressing this matter, South Africa remains a neo-colonial society. And as Fanon says in The Wretched of the Earth, “For a colonised people the most essential value, because the most concrete, is first and foremost the land; the land which will bring them bread and above all, dignity”

The talk on radical economic transformation by the ANC is artificial. It is not genuine, because there isn’t now, and there never was before, any commitment to uproot the vestiges of apartheid and colonialism embedded in our economy. Land inequality is the single most important of these vestiges.

One comment on “Land reform requires change to property clause”