Breaking News! CSAAWU COMMUNIQUE ON THE SETTLEMENT OF THE 14 WEEK STRIKE AT ROBERTSON WINERY 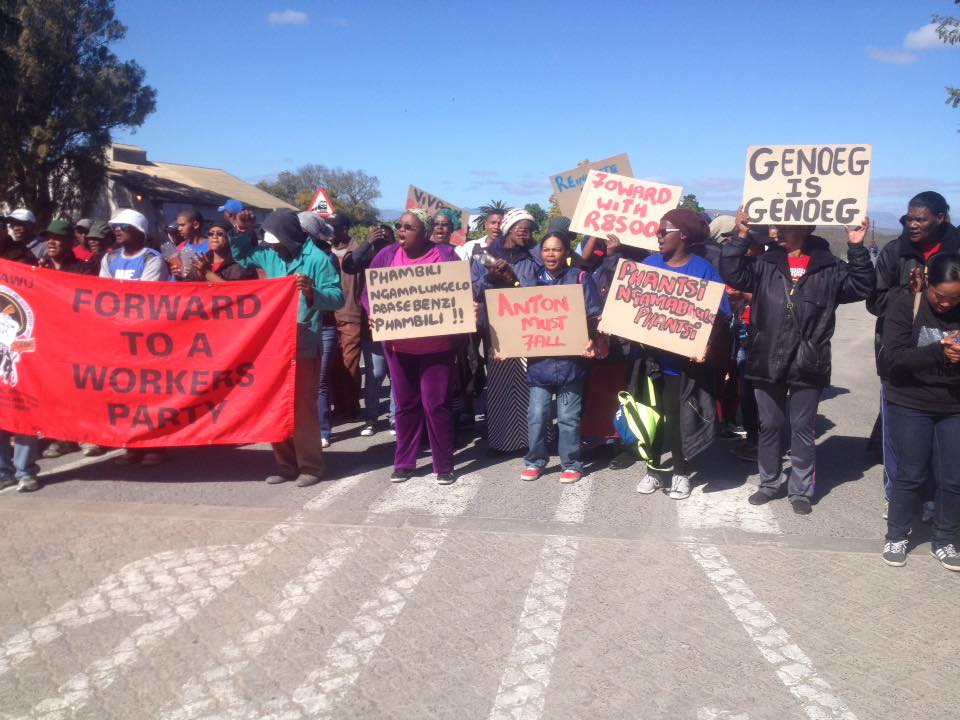 CSAAWU wishes to announce that we have finally reached a settlement with Robertson Winery, which brings a heroic worker – led 14 week strike to an end. Workers will return to work on Monday 28 November. In summary, the terms of the settlement are as follows:

Workers have won an 8% across the board wage increase or R400, whichever is the greater. The increase is backdated to 8 August 2016. Back pay will be paid on 15 December. In addition, workers will receive a full annual bonus equal to a month salary paid on Friday 25 November. Whereas the company insisted on bringing disciplinary action against 16 of the strike leaders, this final agreement excludes any disciplinary action.

Workers went on strike for R8 500 as a living wage. We did not achieve this. However, many victories were obtained. The wine industry will never be the same. The government has been forced to investigate the slavery conditions that exist on the farms and in the wine industry. Workers at the wine cellars across the country will take inspiration from what the Robertson Winery workers have achieved. All the cellars are now going to face militant class struggle to overcome the conditions we have experienced at Robertson Winery. More than that CSAAWU members mobilised a powerful movement of solidarity, internationally and across the entire country. This union, CSAAWU will become the most important union organising farm workers and others in the agricultural sector organising on a militant and democratic basis. Through CSAAWU we have been able to organise solidarity action on farms, solidarity action in related companies such as Robertson Koop, we have organised boycott campaigns, which took Robertson Winery off the shelves not just in SA but in a number of European countries. While our Union does not have the resources for a strike fund we have been able to organise hampers for striking workers that have sustained the workers while they have been on strike. In addition,, some of the poorest paid workers in this country have mobilised a strike for more than three months in a sector where strikes are unheard of. Most importantly, this strike was led by the striking workers who decided when to continue their action and when to reach a settlement. These heroic workers achieved a very high level of unity cutting across colour and language divides. Worker unity was a great victory of this struggle. It is this deep level of unity which gave the workers the capacity to struggle and sacrifice for 14 weeks.

The increase while, still far from the living wage of R8 500 represents a significant increase for workers in the wine industry. This would not have been achieved; the strike could not have endured for this length of time without the tremendous solidarity that was mobilised internationally and locally. CSAAWU wishes to thank all those that stood in solidarity with us. We pledge that we will continue this struggle for a living wage and to defeat the racism and kragdigheid that exists in the agricultural sector.

One comment on “Breaking News! CSAAWU COMMUNIQUE ON THE SETTLEMENT OF THE 14 WEEK STRIKE AT ROBERTSON WINERY”

1 Pings/Trackbacks for "Breaking News! CSAAWU COMMUNIQUE ON THE SETTLEMENT OF THE 14 WEEK STRIKE AT ROBERTSON WINERY"