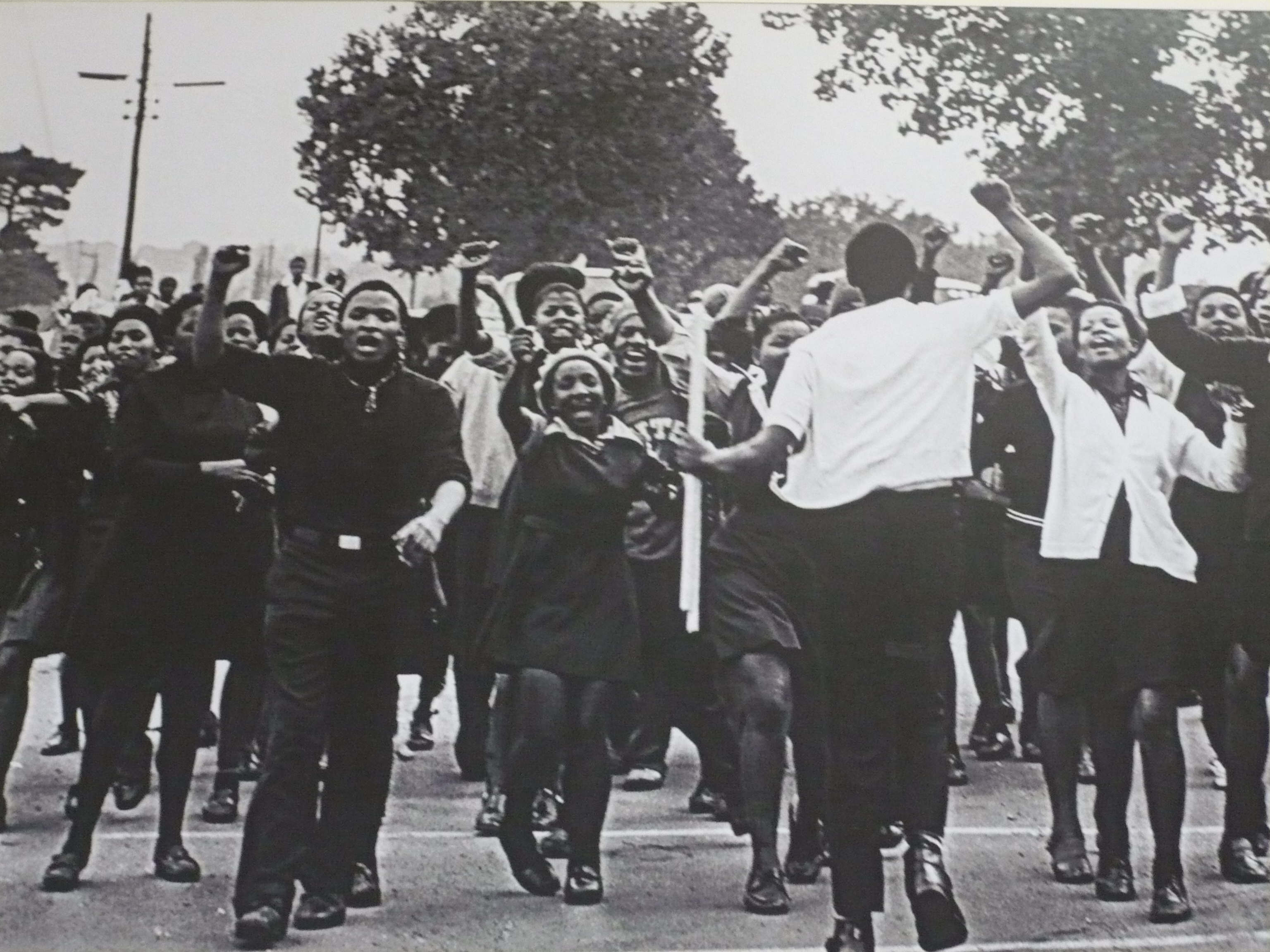 The student uprising which erupted in Soweto on 16 June 1976 and quickly spread to other areas throughout the country was a turning point in South Africa’s politics. It revived the politics of mass resistance which had been harshly halted following the Sharpeville shooting and the banning of the ANC and PAC.

In Soweto, and certainly in many other areas, the uprising was caused by the governments decree to introduce Afrikaans as a compulsory medium of instruction, together with English, in African schools. For many students this was unacceptable because they saw Afrikaans as a language of the oppressors. They also felt that it would not add any value to their future endeavours. What were we going to do with Afrikaans? It was not an international language, remarked a former student leader in Tembisa Township.

Bodibeng High School
In Kroonstads African township, students at Bodibeng High School demonstrated. But it was not because of Afrikaans. It was in solidarity with their counterparts in Soweto and elsewhere in the country. From its inception in 1928, the school had never experienced disturbances by the students. It was only in the 1970s that the students attitude changed and they began to challenge the schools authorities and the blatant racial discrimination practiced in the Afrikaner-dominated town.

From the 1940s Bodibeng High (then Bantu United School) became an educational hub for many Africans in the Orange Free State. As early as 1940 it was one of the two day schools to offer matric. In the mid-1950s, it was the only African school to offer a lower primary teachers course for girls. In the mid-1960s, it was the only African school whose matriculants sat for the Joint Matriculation Board examination and not the Bantu Education senior certificate examination. Because of this the school attracted many students from many different areas.

From 1962, Moeng Jonah Setiloane, the newly appointed principal, enforced extra study classes in the afternoon and at night. He also introduced the compulsory use of English and Afrikaans at school, used alternately on a weekly basis. ìWe were forced to use only these languages during school hours and failure to do so meant punishment, recalled Khotso Sesele who was in Form 1 (today’s Grade 8) in 1975. This helped the students to be comfortable with Afrikaans.

The principal and staff at Bodibeng had only one mission: to educate and not entertain non-educational activities such as politics. Marobo Jacob Ramotsoela, who was a student at the school in the early 1960s, recalled that his teachers did not utter a single word about Dr Hendrik Verwoerd or Bantu Education. Similarly, parents discouraged their children from becoming involved in politics. Tsiu Vincent Matsepe was also a student at Bodibeng in the 1960s. He remembers that his parents warned him against doing a law degree after matriculating: they said no, no, o tla tsoarwa (you’ll be arrested) just like Nelson Mandela. This behaviour created a politically docile student body.

From Turfloop to Kroonstad and back
This situation changed in the early 1970s. After the promulgation of the 1959 Extension of University Education Act, black students could now register and attend their own universities. They no longer needed the permission of the minister of Internal Affairs. In 1970 a number of matriculants from Bodibeng enrolled at the University of the North (also known as Turfloop). It was a year after the South African Student Organisation (Saso) had been launched and Steven Bantu Biko elected president.

Saso adopted the Black Consciousness (BC) philosophy, which strove to instill pride in black people. The ex-Bodibeng students joined Saso and began to engage in political discussions with their peers. They attended meetings where we used to discuss very important political issues like this thing of whites administering our university, Ramotsoela reminisced. Due to political conscientisation, the former high school students began to challenge everything that they felt insulted their blackness, including the nursery rhyme Baa, baa black sheep. They questioned the form and context in which the word black was used.

In 1972, Turfloop administration expelled Onkgopotse Tiro for attacking it and the apartheid government during a graduation ceremony. Students demanded his reinstatement but the university refused. Students responded by boycotting lectures. The university expelled and suspended more than a thousand students. Matsepe and Ramotsoela were among those students. They returned to Kroonstad where they were employed as private teachers at Bodibeng. Matsepe taught General Science and Ramotsoela Mathematics.

Unlike the older teachers, the younger teachers who were politically conscious wasted no time. They conscientised their students. To do this, Matsepe used a simple method. He taught his students the real history of black people. He also questioned their use of white names rather than their black names. He told us these [English] names were given to us by white people because they could not pronounce our real names. Mkhulu Masiza and Mokhele Theletsane stopped using Sherlock and Petrose, respectively, as a result.

To vent out their anger, some of the students, with the help of Matsepe, established an art group called Maokeng Student Art Club, where they produced politically-loaded art work. Others formed a branch of the South African Student Movement (Sasm). In 1973, in line with the BC tradition, members of Sasm boycotted the visit to Kroonstad by Mangosuthu Buthelezi, then leader of the KwaZulu Territorial Authority. He was seen by many in the BC movement as a sell-out because of his pro-bantustan position. Others began to question why their parents were forced to use a separate entrance in stores in town, or why their parents were beaten when returning home from work after nine o’ clock at night.

Bodibeng students fight back
Finally, some of the students openly challenged the schoolís authority. For the first time in the history of the school, students refused to be physically punished. When the schoolís principal tried to intimidate them, they boycotted classes, forcing the principal to request their parents to intervene. Bodibengís student body had changed. It was now vocal and militant.

On 24 August 1976, after months of clandestine preparations, boys attending night study took to the streets, demonstrating against the killing of students in Soweto. They converged in the school yard outside their classrooms and started chanting and marching into the township. On their way, some pelted the police station, the community hall and other government buildings with stones.

All the former students at Bodibeng that I interviewed agreed that they were prompted to demonstrate by a combination of influences. Firstly there was the political conscientisation they received from Matsepe. And secondly there were the piercing words from Mekodi Arcilia Morailane, a woman teacher and a BC adherent, who admonished them for behaving as if nothing was happening in the country: ìYou are sitting here doing nothing when other students are out there fighting. These were Morailanes exact words according to Joseph Fifi Nkomo, a Form 2 (todays Grade 9) student in 1976. He added that she was correct: ìI mean people were dying and we were hiding in the classroom.

After marching around the township, chanting ahe, ahe ntho ena ke masaona (hey, hey, this is nonsense) and damaging a few government buildings, the demonstration was hastily brought to an end. The South African Police in Kroonstad called in reinforcements from the surrounding towns and rounded up all the leaders and arrested them. After days of torture, some of the students divulged Morailanes name to the police as the main instigator. The police collected her from school and she was subsequently charged with sabotage, which carried a minimum sentence of five years.

School students lead township politics
In December, after a two-month trial in Bloemfontein before Judge T.M. Steyn, Morailane and all the students were found not guilty and acquitted. Forty years later former students at Bodibeng can look back with pride that they contributed in changing student politics in Kroonstads black township. From 1985 to 1993 students at Bodibeng and Kananelo Secondary School led and influenced local politics in Maokeng township.

Tshepo Moloi, is a researcher in the History Workshop at the University of the Witwatersrand. He thanks the Wits University Press for permission to use extracts from his book to write this article. Moloi, T. Place of Thorns: Black Political Protest in Kroonstad Since 1976 (Johannesburg, Wits University Press, 2015).

One comment on “The Black Conciousness Movement and student demonstration: Kroonstad 1976”