“Attack of the Nuclear Zombies!”

The Announcement that South Africa has signed a nuclear deal with Russia did not come as a surprise to local anti-nuclear activists. The issue has been bubbling away since the BRICS meeting last year in Durban, and is the logical outcome of South Africa wishing to “punch above its weight” in matters of global geo-political significance.

Well, that is what some pro-nuclear apologists have been indicating to government for some years now. 5at SA “needs to play with the big boys – France, USA”, because nuclear countries are “taken seriously”.

The writing was on the wall when President Zuma quietly took over the chair of the National Nuclear Energy Executive Coordinating Committee from Kgalema Mothlanthe. The revised committee comprises the following ministries; Energy, Public Enterprises, Finance, State Security, Defence and International Relations. The size of the committee was apparently reduced “to strengthen its efficiency in decision making”.

One has to ask: why the Security and Defence clusters are involved? Is it because President Zuma said that we would “enrich uranium to any level we want”, indicating that nuclear weapons development is NOT off the table? Or will secrecy around the nuclear industry be increased?

Clearly, this has been in process for some years now, since the ill-fated IRP2010, which decided – against all the evidence – that a significant portion of new electricity build would be allocated to a “nuclear fleet”. Never mind that our energy policy suggests otherwise; or that the NDP suggests caution and delay at the very least; or that global financial ratings agencies warn against the unacceptable costs attached to a new nuclear build; or that even the infamous World Bank refuses to fund nuclear power – the government remains “resolute” in its decision.

The multi-billion Rand refit of Koeberg generators is an indicator of how big the stakes are. The associated Westinghouse case, which questioned the tender process, was eventually dropped but had reportedly become active again at time of going to press. It reminds us how problematic were the existing tender processes. Westinghouse has said that it had been informed that it had won the tender, until the decision was apparently reversed.

One supposes that Westinghouse will not want to jeopardise its chances of being involved in the proposed R1 trillion nuclear deals that are being promised. Clearly the country cannot afford such an amount, and even mainstream economists are deeply concerned.

The impact on our people is likely to be high. The Hinkley Point nuclear power plant in the UK, for instance, has been guaranteed a minimum price double the current amount for a period of at least 20 years. Imagine the effect of doubling electricity prices in South Africa. Promises of “localisation” ring hollow. We must remember that multi billion ‘offsets’ promised in the arms deal simply did not materialise, despite warnings by progressive civil society that this would happen.

Multi-generational birth defects, from hormonal problems to accelerated leukaemia (especially in children), additional harm to the foetus, immune system damage, cancers and more are the legacy of the nuclear world. The argument is made that we are “exposed to radiation every day”. Yes, but we are generally exposed to NATURAL radiation, as opposed to imposed, additional ionising radiation.

The nuclear industry of course denies these impacts, but when Russian scientists completed their research on the Chernobyl disaster, they confirmed nearly a million deaths long-term. Fukushima promises to be between 10 and 50 times worse than Chernobyl, depending on which measurements one uses. The full picture has yet to emerge, and not at all covered in the mainstream media. Thyroid cancers have already begun to show up (again, especially amongst children). Medical professionals are even moving out of Tokyo, which is a few hundred kilometres from Fukushima, as they confirm that radiation measured in the city has rendered it technically uninhabitable. Imagine trying to evacuate Johannesburg and Tshwane, or Cape Town, in four hours or less.

One way in which to balance out the problem of a perceived lack of supply of electricity is to remember that the majority of power is not used by the homeowner, but by mega-corporations at highly subsidised rates. In 2013, BHP Billiton (a multinational) was paying 22.65c per unit (kWhr) at a time when cost of generation was 41c, and the homeowner paying over R1 per unit.

Shifting subsidies away from elites to our people will achieve two things: more free basic electricity for all (an additional 2c per unit by the mega-users would allow for 200 units free per household per month); and an immediate availability of spare capacity. BHP Billiton uses 9% of our electricity to conduct its business in importing bauxite and exporting aluminium, and has created about 2,000 jobs in SA. Measure this against the 18% used in total by all 50 million South Africans.

The latest nuclear build in the UK comes in at about R1.75 per kWhr. Nuclear power stations have an almost perfect record of never coming in on budget or on time. The plant at Oilikuto in Finland was due to come onstream in 2010 at a cost of some EUR3 billion – it will likely come onstream in 2018, at a cost of EUR8.5 billion. The Flamanville site has rocketed from under Sterling 3 billion to more than Sterling 7 billion and is now running at least 4 years late.

Aside from this, there are the longterm costs of nuclear energy. The radioactive waste that results must be encapsulated, stored and monitored for 150,000 years. Then there is the budget required to decommission Koeberg. Recently, nuclear clean-up costs in the UK have risen to Sterling 80 billion and they continue to rise. Such budgets must be spent and managed over the decades needed to decommission a nuclear power station. These costs will be imposed on future generations.

To do so is to go against government policy. In his 2011 budget speech, Minister Gordhan said that government spending should be guided by three principles, one of which is “Inter-generational equity, so that our children’s wellbeing is not compromised by short-term interests.” How is nuclear power not a transgression of that principle?

Ignore for the moment that “economic growth” for poverty alleviation is a myth – we would need 7% growth for 25 consecutive years to impact on poverty. Even the Treasury does not see economic growth rising to much above 4% through to 2050. Meanwhile, demand has dropped, due both to increased efficiency and to a decline in demand because of global economic factors linked to the global depression. This shows little real signs of lifting any time soon.

The demand that apparently “justified” nuclear power has simply not materialised, and moreover, demand is set to continue on a path of decline for the foreseeable future. The false dichotomy of “it is either coal or nuclear” is a propagation of the myth that renewable energy cannot deliver industrial baseload power. In fact, renewable energy can deliver these levels of power, and it can come on stream quicker than either, at far lower cost.

Wind is priced at about 75c today in SA, with electricity from Medupi and Kusile (and possibly Coal 3) at about 25% more per unit generated. The Returns On Energy Invested (ROEI) also speak volumes: Wind power – 0.62 to 0.9 years; Gas and Oil – one year; photovoltaic solar – 1.5 to 3 years; nuclear power station – 10 to 18 years.

It is obvious that economic factors such as the level electricity pricing and minimal decent work for our people should play a role in the choice made for our energy supply. However, the government does not appear to be taking them seriously. Moreover, the nuclear deal is problematic in another way too: as the proposed technology – in this case Russian – is unproven. 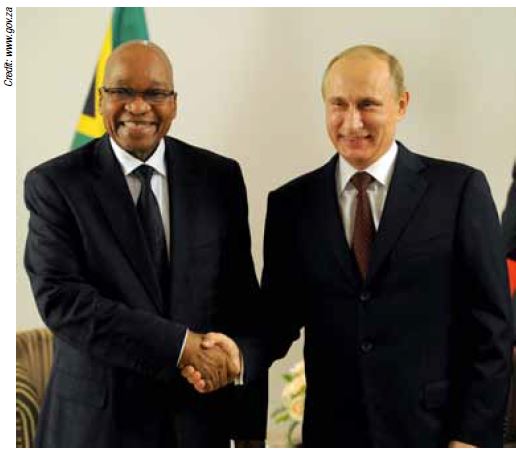 The existing nuclear installations in the country are already a source of injustices visited upon mining-impacted communities. As regards Pelindaba and Koeberg, radiation- impacted ex-workers have taken their case to the Public Protector for the fourth time in a bid for compensation; this time it appears to be in hand.

All these unresolved problems of nuclear waste should be ringing alarm bells throughout our society. Decentralised and local generation, at scale and scope, is the way forward – both for reasons of cost as well as energy security. Critically, this approach would match the existing skill set in our country for accelerated local manufacture.

It is critical that the plans for more nuclear power be stopped in their tracks. The plans involve uranium enrichment and fuel manufacture, radioactive metal smelters for release into the local economy, and ever increasing amounts of radioactive waste – which remains harmful for longer than humans have been on the planet. Local anti-nuclear activists have not been asleep at the switch, but it is definitely time for even greater numbers of progressive forces to join the struggle.

Currently, various players involved in the nuclear metal waste smelter – which could see radioactive metal in our homes – are being challenged in court. More and more information is being released about the nuclear monster, and more and more people are mobilising against it. The national network TSUNAMI (The South African United National Anti-nuclear Mobilisation Initiative) has no funds, but it has built a membership of some 50 civil society organisations, and will grow as more people become aware of the threat.

In 1994 the ANC said: “The nuclear industry should be phased out in the shortest possible time” (ANC environmental desk statement from the proceedings of the Conference on Nuclear Policy for a Democratic South Africa). We call upon the ANC to make good on this promise.

By Muna Lakhani, who is volunteer Branch Co-ordinator of Earthlife Africa Cape Town and National Co-ordinator for the Institute for Zero Waste in Africa.