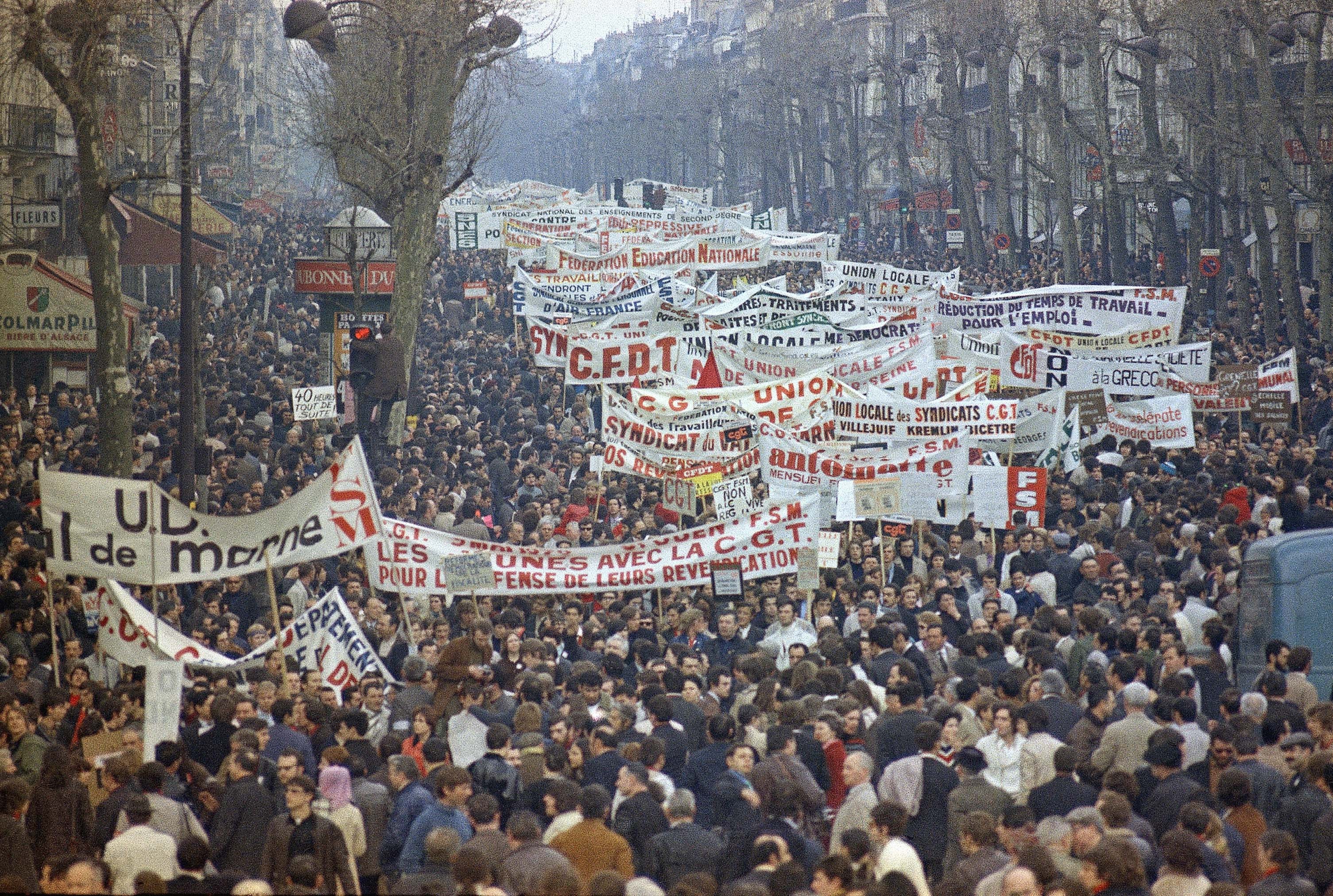 One year after Macron’s election, France is once again in the streets and protests are now spreading in many different sectors of the economy as well as in universities. They are seeking to defend public services and the French social model. The question is, will we see once again a massive popular uprising in France, a new May of social protests?

May 1968, the convergence of student, worker and farmer protests

On May 11, 1968, following a week of occupations, protests and unrest, France wakes up full of indignation and hope, but also fear: the whole night long, students have been fighting police forces. The police have been trying to expel them from La Sorbonne, a campus of the University of Paris. Occupying the Quartier Latin, the student neighbourhood of Paris, students set up barricades to resist the extremely brutal state violence.

French people are shocked by the scale of the repression. On May 13, a million people march is organised in Paris and in many other cities. On May 14, Sud Aviation, an aeronautical company in the west of France, is locked down by its workers and the leadership of the company is prevented from leaving the company by blue collar workers. They are a bargaining chip to force decision-makers in Paris to take them seriously. It is the first factory closed.

In a matter of days, with news spreading, people start talking about a revolution, and nearly immediately the whole country comes to a halt. Public transport networks stop functioning, petrol station run dry, all major companies are shut down and, everywhere people are discussing political alternatives to capitalism and its oppression. Committees are set up in many neighbourhood to make sure people will still be able to find basic amenities. In some places, even farm workers decide to join the movement, to organise food distribution for urban working class neighbourhoods, and to provide strikers with wood to keep their fires going at night.

For the first time since the end of the war, a general strike is successful in France and reveals the contradictions of the French capitalist model. Not only does it reveal the weaknesses of the power of De Gaulle (the President), but it is able to bring together people from extremely diverse background in a broad coalition against poverty, exploitation and conservatism. If ultimately negotiations only bring relatively tiny victories, and even if the following parliamentary elections are lost by a divided left, in the following years, major victories are secured by social movements.

People knew their power and popular organisations became better structured and (wo)manned than ever. In the end, it wasn’t a revolution, but a revolutionary moment that completely changed the psyche of French society; it was a major victory for the working class.

May 2018, the emergence of a new popular front?

50 years later, there are signs that France could once again be on the verge of a massive uprising. It is now exactly a year since Macron came to power. He was elected on the basis of his claims that he was following no dogma, being neither leftist nor rightist. French people have since been able to witness the reality of this promise, and the result is clear: public servants, private workers and students are once again in the street.

Students are fighting against the creation of a selection system that will prevent many working class students from accessing universities. Until now, a high school diploma has been sufficient to allow a student to enrol in “the university establishment of their choice”. The proposal now is to introduce academic selection for university places. “We will stop having everyone believe that the university is the right solution for everyone,” Macron has promised. If this succeeds, it will begin the commercialisation of the university, a process already well advanced in the UK and the US.

Twenty-five campuses across the country have been occupied or blockaded by the students, first in Paris and Toulouse, then slowly spreading to other places.
Meanwhile, the proposed reform of the public railway system, to prepare it for private competition, has thrown rail workers onto the streets. The unions’ strategy has been to create a favourable balance of power by shutting down national trains for two days a week for three months, and possibly longer.

Last but not least, many smaller struggles are also currently underway. Postal workers in many small cities are on strike. Cleaners in the Paris public transport system just won their battle for better working conditions. And finally, protests in public hospitals against the lack of public investment in the health infrastructure are spreading.

If all these protests are independent from each other, they are beginning to come together. Solidarity between sectoral struggles is on the rise, and a few marches and events have brought them together. The traditional May Day commemorations were much bigger than usual. On May 5, an ironical gathering to “have a party for Macron” on the first anniversary of his election, brought a lot of people together in Paris. On May 26, a march organised by both unions and the Front de Gauche (FG: Left Front ) showed Macron that the political opposition to his policies is growing fast. It could be the beginning of something bigger. 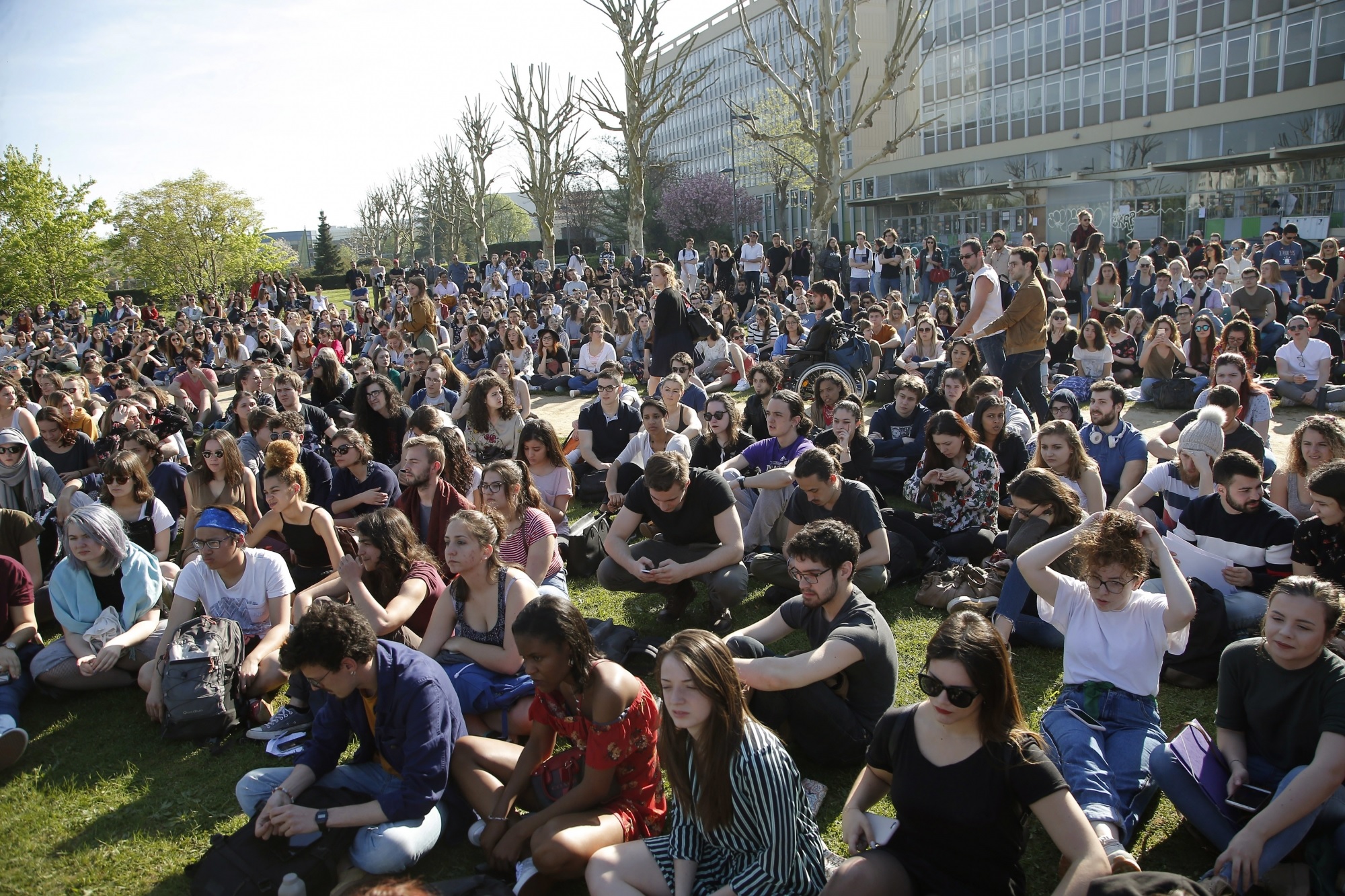 Many obstacles left to a general uprising

However, a few elements tend to show that a national uprising is in fact not round the corner. First of all, when universities have been closed for a while, the government hasn’t hesitated to send in the police to expel protesters. In the past, police intervention in universities was a red flag for student organisations. France has experienced two years of a state of emergency since the Paris attacks claimed by Islamic State, in which 130 people died. It seems that this has accustomed people to strict security rules. This might be one of the reason the expulsions haven’t been met with the usual outcry.

Another element preventing protests from growing is the recurring media-bashing rail workers have been facing since the beginning. TV and radio shows and newspaper editorials constantly depict them as privileged workers. They keep describing the strikers as unreasonable and as using train travellers as hostages. All protests have been covered in a way that has highlighted the violence to discredit activists. In fact, activists have been met with increasing violence from the state.

Lastly, within the left, the leftist front of Jean Luc Mélanchon has been criticised. They were able to gather around them leftist voters during the last presidential elections. But many activists are still critical of the ambitions of the FG and its leader to establish hegemony over the left. The party argues that a cultural hegemony needs to be built from the left in order to win the ideological battle. So the gathering of May 5 was, for instance, “captured” by the FG in spite of the wish of the organisers to bring a large coalition of organisations on board. Many fear that the left will lose its strength by losing the diversity of its proposals and vision.

Taking all of this into consideration, it would be premature to claim that France will rise immediately against Macron’s policies. The left has gained ground recently in people’s minds by exposing his lies and the consequences of his decisions for the people. But it still seems too weak to overcome the challenges ranged against it.

However, this is only the first of five years of Macron’s presidency. The fact that there is already such an uprising is a good sign. It shows that the left is rebuilding itself on a more radical basis after five years of relative calm under the Hollande presidency. The fact that Macron recently declared his support for the Church, breaking with a long tradition of strict secularism, shows that he is now relying on the conservative sections of society to rule.

He has clearly chosen a side, and it is the neoliberal one. And the left is on the move. The only fear is that this was the way that Margaret Thatcher broke the unions when she came into power. Macron is using this confrontation to weaken the unions, one of the key elements of the left. The time is right in France to bring back radical emancipatory politics. These protests signal this is already happening.

Posted in Amandla Tagged with: France